Abiogenesis is the theory that life comes from non-living things. Spontaneous generation was an early model for abiogenesis developed by Aristotle (384-322 BCE) which said that flies formed directly from decaying material and logs gave rise to crocodiles. Experiments by Louis Pasteur in the mid-1800’s disproved spontaneous generation. Since that time, scientists have been working to describe more probable models of abiogenesis which could explain the formation of life on Earth over 3.5 billion years ago.

Alexander Oparin and J.B.S. Haldane were the first scientists to independently propose a chemical-based theory for the evolution of life in the 1920’s. They both hypothesized that Earth’s early atmosphere had mostly ammonia, water, hydrogen sulfide, carbon dioxide or carbon monoxide and phosphate and very little oxygen and ozone. Chemically, this means the atmosphere was reducing, capable of accepting electrons and forming new molecules. Under these primitive conditions, they thought, the effect energy sources such as lightning, ultraviolet radiation or even the shock from an impact could form organic molecules like amino acids. Oparin and Haldane’s theory is also known as the Primordial Soup theory.

The Primordial Soup theory goes on to propose that these organic molecules may have concentrated in certain locations like thermal vents in the ocean or shorelines and underwent further transformation to more complex organic molecules, eventually resulting in life. The work of Oparin and Haldane laid the foundation for other scientists to create laboratory experiments to test these hypotheses.

In 1953, chemists Harold Urey and Stanley Miller designed an experimental apparatus which duplicated the atmospheric conditions on Earth proposed by Oparin and Haldane. Urey and Miller filled a chamber with warm water, water vapor, methane, ammonia and molecular hydrogen and then introduced pulses of electrical sparks into the chamber. After one week, they analyzed the material in the chamber and found a variety or organic molecules including amino acids, verifying this aspect of the Primordial Soup theory. 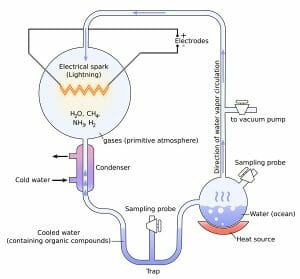 The image above illustrates the experimental setup used by Miller and Urey in 1953 to show that simple molecules could have been created on Earth about 3.5 billion years ago, using only the gases in the primitive atmosphere and electricity from lighting.

The current research and debate about abiogenesis now centers around how and why organic molecules may have accumulated in certain areas on the early Earth and how these molecules increased in complexity and eventually became self-replicating life. Astrobiology, the scientific field that looks for extraterrestrial life, has provided an additional information that supports abiogenesis. For example, studies on Saturn’s moon Titan have shown that its’ atmosphere has no oxygen and that there are organic molecules present.