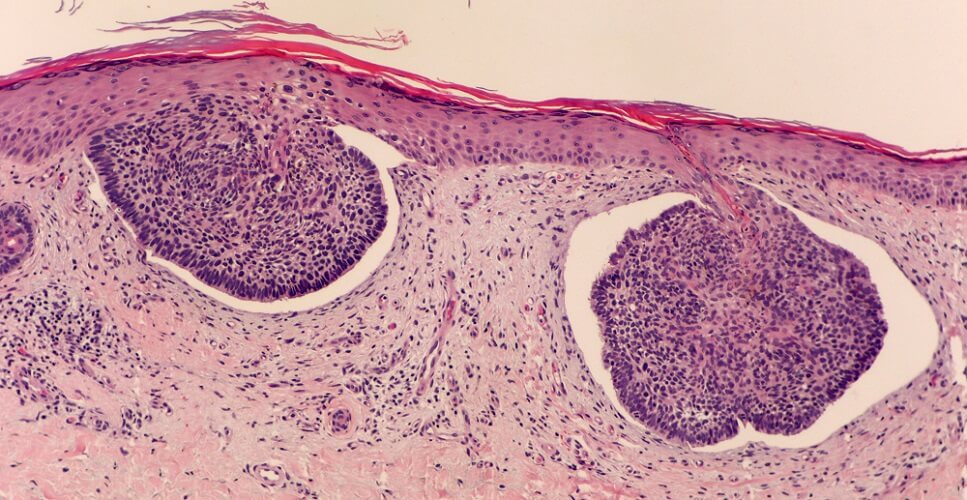 What is a Basal Cell?

To understand what a basal cell is, it is first best to gain an understanding of the tissue where it is found – the epithelium.

Epithelial tissue creates a barrier between the body and the environment – mucus membranes and the skin are good examples and show that this tissue plays a protective role. Most epithelia have a secretory function.

First formed in the fetus, epithelia develop different structures and functions. Early on in embryonic development during a phase called gastrulation, a single-layered blastula (circular layer of cells covering a cavity) differentiates into the gastrula. This is a triple-layered sphere; each layer has a name – ectoderm, mesoderm, and endoderm.

The cells of these layers can communicate with each other throughout life and share some functional and structural characteristics.

Endoderm-derived epithelial tissue forms the lining of the gastrointestinal tract (not including the oral cavity and anus), the respiratory tract, part of the bladder and urethra, and secretory glands in the digestive tract. Most of this tissue is glandular epithelium.

The mesoderm differentiates to form parts of the urinary tract lining as well as the linings of the genital system, the blood and lymphatic vessels, the myocardium, and the pleural (lung) and pericardial cavities.

Epithelial cells can be simple or stratified, columnar, cuboidal, or squamous (flat). Some, such as the columnar epithelial cells of the gut, are ciliated for better absorption.

The epidermis (skin epithelium) is formed from multiple layers – it is stratified – and the lowest layer is called the basal layer or stratum basale (see below image). Any epidermal cells in this layer that adhere to a basement membrane can be called basal cells; however, this name is location-derived. True basal cells are stem cells.

The surface of the epithelial cell that lies closest to the inner tissues is called the basal surface; this tells us that basal means base. We can then understand that basal cell does not always describe a specific type of epithelial cells but a position.

Basal cells are more likely to be called epithelial stem cells in scientific texts to distinguish them from the location-derived name. As yet, the full mechanisms of cell renewal in the epithelia are unknown. Other terms used to describe basal stem cells are keratinocytes (of the skin) and basal epithelial cells.

Basal cell function is two-fold: cell renewal and cell adhesion. New research has also not yet uncovered the deeper mysteries of asymmetric stem cell division where, instead of two identical daughter cells being formed, one functional cell and one stem cell are produced.

Symmetrical division – the production of two identical daughter cells – is also possible in basal stem cells. In simple epithelia, such as the simple columnar epithelium of the gut, pockets or niches (crypts of Lieberkühn) contain basal stem cells. These divide to produce functional intestinal cells at a rate of two to three hundred cells every day. Intestinal cells then migrate to their final position in the gut lining.

One characteristic of the basal cell is the presence of hemidesmosomes – protein complexes that allow them to adhere to the underlying basement membrane. In people with genetic abnormalities that prevent the formation of hemidesmosomes, the skin and mucous membranes are very fragile. One pathology, epidermolysis bullosa, is caused by abnormal hemidesmosome formation that leads to blistering.

This adhesive characteristic shows us that simple epithelia also contains basal cells, even with the lack of a basal cell layer. Type I hemidesmosomes (type I HDs) contain a broader range of proteins including marker proteins (antigens) and are found in stratified epithelial tissue; type II HDs of simple epithelia lack certain components that are necessary for stratified layers. One of these (BPAG2) seems to be linked to the development and migration of skin cells (keratinocytes) as they move up through the layers of stratified tissue.

Basal cell cancer or basal cell carcinoma (BCC) is a slow-growing cancer of the cells of the  basal stem cells of simple and stratified epithelia. As the producer of any epithelial cell is the stem cell, any mutations to their DNA will be passed on to their daughter cells.

Ultraviolet (UV) radiation is one of the primary causes of DNA mutations that make cells divide without regulation; basal cell skin cancer is the most common type of BCC.

The risk factors for BCC include light skin, light eye color, exposure to UV B, UV A and ionizing radiation, regular contact with chemicals such as arsenic and asbestos, immunosuppression, smoking, an earlier diagnosis of BCC that has been cured, and genetic disorders such as basal cell nevus syndrome.

Even though the forearms, hands, and lower limbs are often exposed to the sun, these sites are not common for BCC. The face – particularly the basal cell nose carcinoma – is more likely to be damaged by solar radiation over time; the older the person, the higher the risk. This is because of the cumulative effects of DNA damage and faulty repair.

Basal cell carcinoma pictures usually show facial lesions at relatively late stages. Early warning signs are small sores that do not heal, patches of red or white that may or may not itch, scar-like lesions that were not caused by trauma, and shiny clear, pearly, pink, or red bumps.

While most BCCs are not malignant and can be removed and cured with excision, some forms are more aggressive. When you look at a BCC sample under a microscope, islands of basaloid (basal-like) cells can be seen that may or may not secrete mucus.

BCC rarely metastasizes and, when found at a relatively early stage, can be removed without the need for further treatment. Treatment choice depends on the location, size, depth, and recurrent nature of the tumor and the patient’s general health.

Mohs micrographic surgery (see above image) cures up to 99% of early-stage cases of BCC. Using a microscope, the borders of the cancerous tissue are traced layer per layer; each layer is checked for abnormal cells during the procedure.

Some surgeries, particularly of the face, may require reconstructive or cosmetic surgery.

Carcinomas with suspicion of metastasis are usually treated with surgery followed by a course of radiotherapy and perhaps chemotherapy to kill any remaining cells.

Most basal cell carcinoma causes are preventable; diagnosis at sufficiently early stages is associated with a high cure rate. This means that BCC is rarely fatal. Similarly, rodent ulcers are rare as most treatments are curative.

Mohs micrographic surgery has the highest cure rate – only 2.5% of patients experience recurrence after a term of five years, although not all tumors are eligible for this procedure. High-heat treatments (curettage and electrodesiccation) are associated with a 7.7% five-year recurrence rate.

Patients who refuse surgery or have tumors in difficult-to-reach areas can expect control of tumor growth in 85% – 95% of cases with radiotherapy. This option is usually only recommended for frailer, older patients.

In cases that have not metastasized, basal cell cancer is 100% curable. When metastasis occurs (stage IV BCC), basal cancer cells are most likely to settle in the lungs.

Metastatic basal cell carcinoma prognosis is poor with death occurring within four and a half years for most patients. However, it is extremely rare to find cases of advanced BCC. Today, targeted therapies can increase overall survival rates even for locally advanced and metastatic BCCs.