Any blood cell definition involves a variety of cell types, each with specific functions. The primary components of blood are plasma, leukocytes, erythrocytes, and platelets; the latter three are all blood cell examples. Without them, no oxygen transportation through the circulatory system would occur, our blood would not clot, and we would have a severely compromised immune system. Blood cell production begins in the red bone marrow. 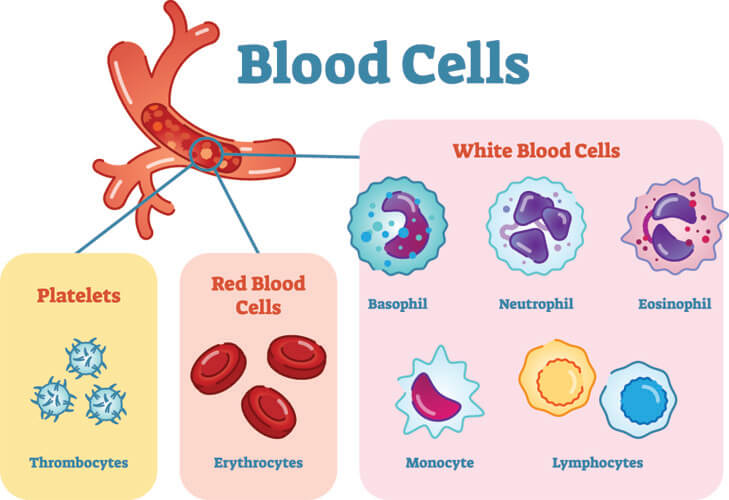 Leukocytes come in a variety of forms. The original cell – the hematopoietic blood cell – is a multipotent stem cell that differentiates into the precursors of all blood cells.

If you leave a blood sample to stand for thirty minutes, you will notice that the different components separate. Heavier erythrocytes sink to the bottom; these make up around 45% of the total blood sample. In the middle of the tube a thin, pale line constitutes the leukocyte and platelet populations. Leukocytes make up around 0.7% of the total blood volume (TBV) in a healthy person; platelets also form less than 1% of the TBV.

Plasma, at the top of the sample, helps transport the different cells through the body as well as a range of molecules. This fluid contains around 92% water; the rest is composed of important proteins (albumin, gamma globulin, and clotting factors) and a small proportion of sugars, fats, hormones, vitamins, and mineral salts.

There is only one type of red blood cell in the body; the same applies to the thrombocyte. The white blood cell, however, is found in several forms.

The smallest of the three types is the thrombocyte. It measures between five to seven micrometers in diameter – about 350 platelets would fit on the head of a pin. Plate-like in shape (hence the name), these cells are fragments of a larger cell called a megakaryocyte. Each megakaryocyte can produce one to three thousand platelets. Every day, a healthy human produces circa ten billion platelets; blood vessel trauma can increase this production rate twenty-fold.

The erythrocyte measures between six to eight micrometers – 250 could fit on the head of a pin. It is a circular disc with concave centers on both sides. This shape increases the surface area of the cell for efficient oxygen uptake and release. Every day, a healthy human produces circa 200 billion of these important cells.

Scientific ideas about blood cell linage are going through many changes. The earlier understanding of blood cell formation from stem cells – hematopoiesis – is becoming outdated as researchers discover anomalies in the classic theory. Dendritic cells, for example, were formerly thought to originate from the leukocyte line but now appear to have their own, unique branch.

The classic hematopoietic blood cell diagram below shows the main lineages. A single multipotent hematopoietic stem cell is the origin of all blood cells. From this, two progenitor cells – common myeloid and common lymphoid – split the production process of lymphocytes from the other blood cell groups.

The common myeloid progenitor cell can differentiate into the megakaryocyte that will fragment to produce thrombocytes, erythrocyte progenitors, mast cells (of connective tissue), and myeloid leukocyte progenitors.

As yet, scientists have not agreed on a standard lineage process as they are still learning about the complex stages of blood cell production.

Blood cell functions can be split into three main groups according to type: oxygen transportation, immunity, and the blood clotting process. These functions are the result of the erythrocyte, leukocyte, and thrombocyte respectively.

Red blood cells (RBCs) transport oxygen and some nutrients through the circulatory system, although recent advances tell us that they also help to:

The primary role of erythrocytes – the transport of gases from the lungs to the tissues – gives two results: oxygen supply to the cells of tissues and partial maintenance of the acid/base equilibrium.

RBCs contain a protein called hemoglobin wrapped around iron atoms. Oxygen attaches readily to the iron and is released when the cell arrives at an area where the oxygen concentration is lower.

Carbon dioxide in the blood acts as an acid; although only a small percentage of this gas is taken up in RBCs, the system that controls body pH is extremely sensitive.

This article will not discuss the different functions of WBC groups. Leukocytes are immune cells that work in different ways to remove foreign particles such as microbes and pollutants, and waste products that include dead cells and toxins.

Platelets circulate in the blood and go through three different stages when they detect blood vessel wall damage. Thrombocytes are part of the hemostasis mechanism that helps prevent blood from leaking out of damaged capillaries, veins, and arteries.

Blood tests always include cell counts to detect abnormalities. Elevated or low cell numbers can mean the presence of disease.

When all blood cell counts are low, for example, this could indicate a problem in the bone marrow. If only one type of WBC is elevated this could show the presence of a specific pathogen – people with asthma usually have high eosinophil counts, for example.

In the average, healthy human, the following numbers apply: