How is a Cam Plant Suited to Its Environment?

CAM plants, also called succulents, must be efficient at storing water because of the dry and arid climates they live in. The term crassulacean comes from the Latin word crassus which means “thick.” Some examples of the over 16,000 species of CAM plants on Earth are cacti, sedum, jade, orchids and agave. Succulent plants like the cactus are full of moisture and have thick skins and a waxy coating to reduce evaporation. Succulents can attract animals because they are a concentrated source of water and moisture. To defend against this, many succulents have sharp spines (which are actually modified leaves) or a “hairy” coating of fine needles to deter predators. 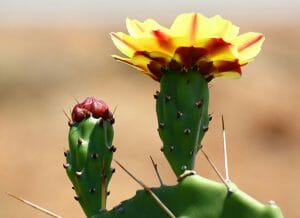 The image above shows the tulip prickly pear cactus Opuntia phaeacantha which is a CAM plant that has thick skin and a waxy coating to help prevent moisture loss. The needles help to deter predators.