Abiotic Factors in the Savanna

The savanna is an ecosystem that covers about 20% of the Earth and is characterized by dry grassy plains and widely-spaced trees. The abiotic factors of the savanna are the non-living things that influence the area. Savannas are located in the tropical and subtropical areas of the Earth. The largest ones are in Africa, South America, Australia, India, the Myanmar-Thailand region of Asia and Madagascar. Paleontologists believe that savannas began to form about 66 million years ago during the Cenozoic era when temperatures were cooling and rainfall decreased on the edges of tropical regions. When early humans first appeared on Earth, they lived on the savanna.

Abiotic factors control which organisms live in certain areas, where they live and the size of their populations. Small changes in any of the factors can have a huge impact on ecosystems. Abiotic factors normally fall into three categories: climatic, edaphic (the soil and geography of an area) and social (land and resources usage).

Abiotic Factors in the Savanna

Depending on the amount of rainfall they receive, savannas are subdivided into three categories: wet, dry and thornbush. The wet savannas have a short dry season lasting about 3-5 months. The dry season for dry savannas ranges from about 5-7 months. Thornbush savannas have dry seasons that are greater than seven months. 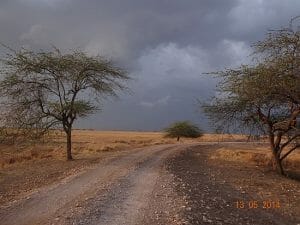 The image above shows rain clouds over the Velavadar Blackbuck National Park savanna in India.

The soils of the open grassy plains on the savanna generally have low fertility. The most fertile areas are those directly beneath the scattered trees which result from the trees’ fallen and decaying leaves. The soil fertility in a larger region can be enhanced by the ability of some trees to draw up minerals and nutrients from deeper in the ground and benefiting trees in plants in the surrounding area. In addition, termites are responsible for creating about 30% of the decomposed organic matter on the savanna. These nutrients can be stored for extended periods of time in the distinctive mounds they build. The term “termite savanna” describes areas where old termite mounds slowly break down and fertilize the soil.

One social abiotic factor that is having a significant impact on global savanna is climate change. The current data show that some savannas may expand and other may reduce in size due to the greenhouse effect caused by increased carbon dioxide in the atmosphere. These changes will, in turn, significantly alter the animals, plants and insects that live in those areas. The ability of the savannas on Earth to adapt to these changes depends in part on how fast they occur. Some areas may not be able to adapt at all and in time will cease to exist.