A nonvascular plant is any species of plant which does not have specialized vascular tissues. This includes everything from higher structured forms of green algae, which have plant-like characteristics, to mosses (Bryophyta), liverworts (Marchantiophyta) and hornworts (Anthocerotophyta). Members of these groups, which live in both marine environments and on land, are considered a nonvascular plant.

Lifecycle of a Nonvascular Plant

All plants and some algae exhibit an alternation of generations life cycle. In this cycle, a gametophyte gives rise to gametes. The gametophyte is a haploid organism, containing only one set of DNA. The gametes, therefore, are produced via mitosis. When these gametes fuse, they create a zygote, which is a new diploid organism. This zygote will grow up into the sporophyte generation.

The sporophyte generation is responsible for producing spores. To do this, a mature sporophyte will produce cells capable of undergoing meiosis, a cell division which divides the double set of DNA. The spores, therefore, are again haploid. Spores, unlike gametes, develop directly into new organisms, the gametophyte generation. Thus, each generation alters between a haploid and diploid state.

Examples of a Nonvascular Plant

Moss is a nonvascular plant found worldwide. Moss is often one of the only plant types to colonize certain areas, including areas with poor soil. Moss typically grows in wet, damp areas. This is not always the case. Moss has colonized most environments, from the cold Artic to the dry desert. There are approximately 12,000 species of moss. Some moss species are nearly microscopic, while others can grow over a foot tall. Mosses, being a nonvascular plant, are mostly limited in height beyond this. Peat is a type of fuel created from the dense sheets of Sphagnum moss which grows in peat bogs. Moss can be seen in the image below. 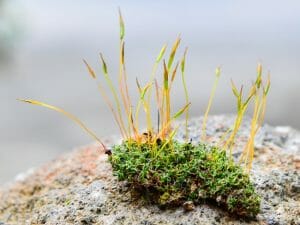 Where moss grows in small branching structures, and many organisms get packed in a larger mat or bundle, liverwort grows as small, individual leaf-like structure. The thallus, as it is called, is the dominant gametophyte. The thallus will produce specialized organs, to house the sporophyte. Liverwort and hornwort are almost indistinguishable, besides some differences in their thallus and the structure of their sporophytes. However, genetic evidence has revealed that liverwort and hornwort, while both a nonvascular plant group, are unrelated enough to deserve two separate divisions. A typical liverwort can be seen below. 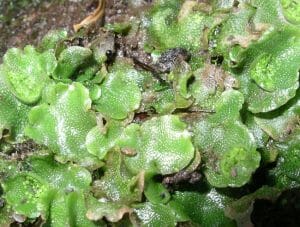 Commonly mistaken as liverwort, hornwort is a closely related group of nonvascular plant species. Like mosses and liverworts, hornworts exist as a dominant gametophyte form. Hornworts, because of the way that they combine their chloroplasts with other organelles, are thought to be more closely related to certain species of algae than other land plants. While hornwort, liverwort, and mosses used to all belong to the Bryophyta, the hornworts and liverworts have been given their own divisions. This reflects the finding that the groups are not closely related enough to be considered the same group. In the picture below you can see a hornwort. Note that while it looks like liverwort, you can easily see the horn-like structures. These structures house the sporophyte generation, creating spores.


Answer to Question #1
B is correct. Water is heavy. Around 8 pounds per gallon, to be exact. The higher a plant grows, the more gravity the plant must overcome to deliver water to its cells. A nonvascular plant is at a huge disadvantage because it cannot use the forces of adhesion and cohesion, which help water stick to the sides of vascular tissue and itself. This allows transpiration in the leaves and absorption in the roots to move water and counteract gravity.


Answer to Question #2
A is correct. While nonvascular plants do transport water and sugar between their cells, there is no organized structure for doing so. These vascular tissues allow a vascular plant to grow much larger and distribute nutrients to the root. Nonvascular plants are typically simpler in construction, and cells are less specialized in their actions.