Importance and Roles of Decomposers

The organisms that occupy the decomposer level of a biome are essential to life on Earth. They break down dead plant and animal matter so the nutrients in them are recycled back into the ecosystem to be used again.

Fungi are the main decomposers in many ecosystems, particularly in forests. One of their main functions is to help release nitrogen and phosphorous from dead decaying matter. They do this through a series of specialized proteins and enzymes in their cell walls and hyphae (root-like filaments). Fungi are particularly suited to penetrating large pieces of decaying matter like wood with their hyphae and breaking it down with lignin-digesting enzymes. Bacteria are also key organisms at the decomposer level.

There are other organisms in nature such as earthworms, some insects, sea cucumbers and woodlice that also break down decaying material, but they need to ingest it first unlike fungi that use chemical and biological processes. These organisms are called detritivores.

Roles of Decomposers and Detritivores

Organisms in this level of the food chain provide nutrients for the producers (plants) who in turn are eaten by the consumers in the next level who are then eaten by tertiary consumers. Fungi release enzymes that break down dead organic matter and release it into the soil while earthworms excrete nutrient-rich waste that adds more vitality to the soil. The tunneling action of earthworms also helps to break up and aerate the soil.

Soil bacteria such as Bacillus subtilis and Pseudomonas fluorescens are extensively involved at the decomposer level as well. They are critical for the early stages of decomposition before fungi and earthworms take over. Bacteria not only feed on dead leaves and weeds but they also fix nitrogen in the soil so it is not lost to the air or water (see below).

Decomposers are involved in virtually all of the nutrient cycles on the planet. The plants in the consumer level rely on decomposers to break down dead organic material to release the nutrients and elements like carbon, oxygen and phosphorus back into the soil. This along with energy from the sun powers the process of photosynthesis in plants. When organisms in the consumer level eat the producers, they extract the energy from the food and excrete waste that goes back into the decomposers food chain. This is the constant process of ingesting, excreting and recycling that goes on in an ecosystem.

Decomposer bacteria are responsible for fixing nitrogen in the soil, meaning they transform nitrogen into a form that can be used by other organisms in the food chain. Specifically, the bacteria take atmospheric nitrogen and turn it into molecules such as ammonia, nitrate and nitrite which can be used by plants. In some plants like legumes, the bacterium Rizobium lives in nodules on the roots of the plants in a symbiotic relationship. In turn for giving them a place to live, the bacteria return the favor by fixing nitrogen for the plants to use. 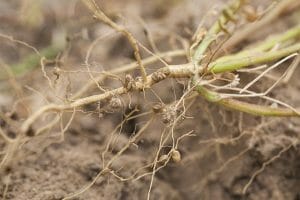 The image above shows nitrogen-fixing nodules on the roots of a legume plant.

Decomposers are like the housekeepers of an ecosystem. Without them, dead plants and animals would keep piling up with the nutrients the soil needs trapped inside. Decomposers clean up the dead material by processing it and returning the nutrients to the soil for the producers. If the decomposer community is damaged or dies, the whole biogeochemical cycle of an ecosystem is affected. Should this happen on a larger scale, the entire planet would be in peril.