Hyphae are comprised of hypha, which are the long filamentous branches found in fungi and actinobacteria (shown below). Hyphae are important structures required for growth in these species, and together, are referred to as mycelium. 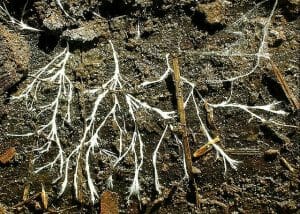 Each hypha is comprised of at least one cell encapsulated by a protective cell wall typically made of chitin, and contain internal septa, which serve to divide the cells. Septa are important as they allow cellular organelles (e.g., ribosomes) to pass between cells via large pores. However, not all species of fungi contain septa. The average hyphae are approximately 4 to 6 microns in size.

Hyphae growth occurs by extending the cell walls and internal components from the tips. During tip growth, a specialized organelle called the spitzenkörper, assists in the formation of new cell wall and membrane structures by harboring vesicles derived from the golgi apparatus and releasing them along the apex of the hypha. As the spitzenkörper moves, the tip of the hypha is extended via the release of the vesicle contents, which form the cell wall, and the vesicle membranes, which create a new cell membrane. As the hypha extends, new septa can be created to internally divide the cells. The characteristic branching of hyphae is the result of the formation of a new tip from a hypha, or the division of a growing tip (see diagram below). 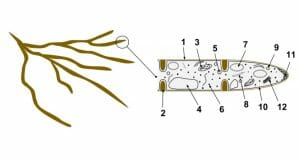 Hyphae are associated with multiple different functions, depending on the specific requirements of each fungal species. The following are a list of the most commonly known hyphae functions:

Nutrient Absorption from a Host

Some hyphae of parasitic fungi are specialized for nutrient absorption within a specific host. These hyphae have specialized tips called haustoria, which penetrate the cell walls of plants or tissues of other organisms in order to obtain nutrients.

Some fungal species (e.g., mycorrihizae) have developed a symbiotic relationship with vascular plant species. The fungi forms specialized hyphae called arbuscules, which can be found in the roots or phylum of vascular plants, and function to absorb nutrients and water from the soil. In this manner, the hyphae aid the plants by increasing its access to nutrients in the soil while facilitating its own growth.

In some fungal species, hyphae have evolved into specialized nematode-trapping structures, using nets and ring structures to trap nematode species.

In general, hyphae can be classified based on the following traits:

Fungal species are also further classified based on the hyphal systems they contain. There are four general subtypes:

Under a microscope, the appearance of oily or granular hyphae under a microscope is termed gloeoplerous. This term is also used to further classify the hyphae of various species.

1. Which of the following statements is TRUE regarding hyphae?
A. All fungi contain skeletal hyphae.
B. All hyphae contain septa.
C. Fungal species can exhibit both generative and binding hyphae.
D. Fusiform skeletal hyphae are a form of pseudohyphae.


Answer to Question #1
C is correct. Fungal species are considered to have dimitic hyphae if they exhibit both generative and binding hyphae. All fungi contain generative hyphae, but not all exhibit skeletal hyphae. Hyphae can be aseptate in that they do not contain septa. Fusiform skeletal hyphae are true hyphae, whereas pseudohyphae refers to a form of incomplete cell division exhibited by some yeast species.


Answer to Question #2
D is correct. The primary function of hyphae is to absorb nutrients from the local environment and transport them where needed.