The excretory system consists of organs which remove metabolic wastes and toxins from the body. In humans, this includes the removal of urea from the bloodstream and other wastes produced by the body. The removal of urea happens in the kidneys, while solid wastes are expelled from the large intestine.

The excretory system in humans consists mainly of the kidneys and bladder. The kidneys filter urea and other waste products from the blood, which are then added to the urine within the bladder. Other organs, such as the liver, process toxins but put their wastes back into the blood. It is up to the kidneys to filter the blood so that toxic substances do not accumulate. These organs can be seen in the image below. 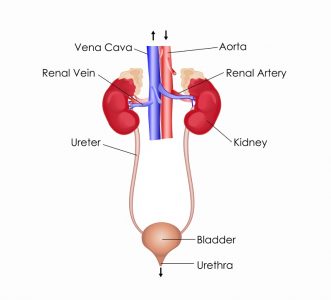 The excretory system has other functions beyond removing waste products from the body. It is also crucial in maintaining internal homeostasis. Parts of the excretory system are also influenced by other body systems, such as the muscular system and skeletal system. For example, the kidneys secrete a hormone which tells the bones to produce more red blood cells.

When the excretory system is not functioning, bad things can happen. A build-up of urea within the blood can lead to a debilitating toxic shock. In other animals, the excretory system can include a number of other components. For example, sea turtles have excretory organs near their eyes which remove large amounts of salt from their bodies. This allows them to drink salt water to maintain their water balance.

The excretory system functions as the bulwark and balance to the digestive system. While we consume food and drink to nourish the body and provide energy, the excretory system ensures that homeostasis is maintained, irrespective of changes to the nutritive value of food.

It regulates the fluid balance of the body, maintaining adequate salt and water levels. When there is excess water, it is removed through the production of hypotonic urine. When we consume salty food or lose water through perspiration, the concentration of urine is increased to preserve the osmolarity of body fluids.

The primary excretory organs in the human body are the kidneys, ureters and urinary bladder, involved with the creation and expulsion of urine. Through these organs, much of the nitrogenous waste of the body, especially urea, is expelled. Other organs such as the liver, large intestine and skin are also necessary for the excretion of specific metabolic wastes.

The kidneys are paired, bean-shaped organs located in the abdomen, on either side of the spine, under the diaphragm. They are made of a large number of structural and functional subunits called nephrons. These nephrons perform the primary task of filtering blood and removing waste products. Each nephron snakes between the outer cortex of the kidney and the inner medulla, with different activities occurring at each site. 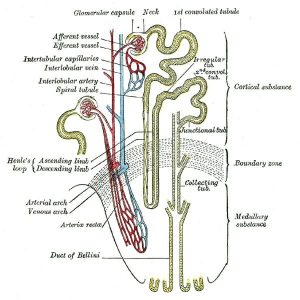 The image above shows parts of two nephrons, with their relative positions within the kidney. Each nephron begins with a globular structure called the Bowman’s capsule located in the renal cortex. This structure receives blood from renal circulation through an afferent arteriole that further divides to form a tuft of capillaries called the glomerulus. The kidney is richly vascularized with capillary beds surrounding each nephron (intertubular capillaries) as well as blood vessels running between the lobes of the kidney (interlobular arteries and veins).

A process of ultrafiltration creates the glomerular filtrate from blood, which is remarkably similar in composition to blood plasma. Water, small molecules, and proteins smaller than 30 kilodaltons in size can pass freely into the lumen of the Bowman’s capsule. The anatomy of each nephron is discussed below.

Bowman’s Capsule to the PCT

The Bowman’s capsule involutes and creates a neck, which then extends into the first elongated tubular structure called the proximal convoluted tubule or PCT. The PCT is the site for secreting some acids, and for reabsorbing nearly two-thirds of the glomerular filtrate. It also removes all glucose and amino acids. The presence of either glucose or other organic solutes in the urine is a sign of kidney damage, especially of the cortex. Some nitrogenous waste is also removed from the body as ammonia secreted from the cells forming the PCT. Many medications are also detoxified at this site.

PCT to the Loop of Henle

The PCT leads into a U-shaped structure called the Loop of Henle, extending into the medulla of the kidney. This has two functionally and anatomically distinct arms – the ascending and descending limbs. Between these two arms of the loop of Henle, through a set of electrolyte pumps, a high urea concentration is maintained in the medulla of the kidney.

This is followed by the thin ascending loop, which has the opposite property of being permeable to ions and impermeable to water. Solutes such as sodium ions are actively reabsorbed, reducing the concentration of urine. However, by this time, the volume of fluid filtered at the glomerulus has been reduced to a fraction of its quantity.

Loop of Henle to the DCT

The ascending limb then leads into the distal convoluted tubule or DCT, also known as the second convoluted tubule. The DCT is the site for the activity of most hormones that regulate kidney function. This includes the antidiuretic hormone (ADH) and angiotensin II (AT II). This region regulates ion and pH balance. From the DCT, urine passes through collecting ducts that finally lead out of the kidney through ureters. 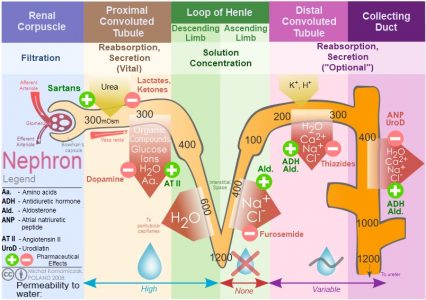 This image is a composite representation of the nephron, with details about the substances reabsorbed at each site, the osmolarity of the filtrate at different parts of the nephron, and the impact of different hormones or medications.

The urinary bladder is a sac-like structure with muscular walls that holds urine until it is expelled from the body during micturition. The bladder receives urine through two ureters – one from each kidney –that enter through openings called ureteric orifices. These orifices are located at the convex fundus of the organ. Urine exits the bladder through the urethra.

The walls of the bladder are made of smooth muscle and the inner epithelial lining of this organ consists of a remarkable tissue called transitional epithelium. The cells of this stratified tissue change shape based on whether the bladder is empty or full, allowing it to remain elastic, accommodating up to half a liter of urine.

In men, the bladder lies on the pelvic floor in front of the rectum. In women, it is located near the uterus, leading to a number of changes to the patterns of micturition during the course of pregnancy. During the course of gestation, there are major changes to blood volume and increases in glomerular filtration rate. While the bladder itself increases in size, nearly doubling by the end of the third trimester, the enlarged uterus with the weight of the fetus, amniotic fluid, placenta, and other tissues can create stress incontinence.

The liver is the main detoxifying organ of the body, especially for nitrogenous wastes. The cells of the liver play host to biochemical processes that create ammonia from amino acids. Since ammonia is extremely toxic, it is quickly converted to urea before being transported in the blood towards the kidney.

Most animals make the choice between ammonia, urea, and uric acid as the preferred mode for nitrogenous waste excretion, based on the availability of water. While ammonia is toxic, it can be quickly diluted and removed from the body with ample water, and therefore remains the chemical used by aquatic animals. Terrestrial animals with regular access to water tend to use urea, which has lower toxicity. Birds and other animals that have minimal water intake expend energy to convert urea into uric acid, which needs a minimum amount of water to store safely until excretion.

The liver is also necessary for the removal of the decomposed hemoglobin, some drugs, excess vitamins, sterols, and other lipophilic substances. These are secreted along with bile and finally removed from the body through feces. The large intestine, therefore, plays a role in excretion, especially for hydrophobic particles.

The skin is a secondary excretory organ since sweat glands in the dermis can remove salts and some excess water. The skin also has sebaceous glands that can secrete waxy lipids.

A major product that must be excreted from all animals is carbon dioxide. Carbon dioxide is created in the cells, as they undergo aerobic respiration. This waste product is removed from the cells and transferred to the bloodstream. When the blood reaches the gills or lungs, it is exchanged for oxygen and released into the atmosphere. Fish also use their gills to expel a number of other waste products.

In fish and aquatic animals, the excretory system is fairly simple. The gills are a major site of excretion, and some waste products are simply added to the blood to be excreted in the gills. These animals also rely on their skin and glands to excrete excess salts and other waste products. In fact, freshwater and saltwater fish have drastically different kidney functions, based on the concentration of salt in the surrounding water.

The excretory system, especially the kidneys, can be injured, damaged or have suboptimal functioning, either due to acute stress or through chronic conditions.

Renal failure or renal insufficiency is the inability of the kidney to filter wastes from the blood and maintain fluid homeostasis. The causes of renal failure could be diseases such as diabetes mellitus and hypertension that can cause damage to glomerular capillaries. Diabetes insipidus arising from hormonal insufficiency, reduced blood flow from injury, infections in the body and bloodstream, medications, or kidney stones can also affect kidney efficiency.

Initial symptoms can be as mild as swelling in the legs, indicative of the inability of the kidney to maintain fluid homeostasis. The presence of toxins in the blood can cause a feeling of nausea and vomiting. Changes to the RBC metabolism and reduced erythropoietin secretion from the kidney can lead to anemia, weakness, sleepiness, and confusion. Excessive potassium ions can lead to cardiac arrhythmias, and changes to muscle tone and contractility.

Depending on the cause of renal insufficiency or failure, the injury can be reversed. In most cases, long term changes to diet and lifestyle are necessary to maintain health. When the kidney is functioning at extremely low efficiency, waste removal has to be done through an external apparatus, called the dialysis machine. Kidney transplant is also occasionally recommended.