Ecological succession describes the changes in species living in an ecological community over a period of time. The changes that occur are predictable and orderly and progress through two main stages called primary and cyclic succession. Starting with an area that has never had an ecological community, the first stage sees pioneer plants like lichens and mosses take hold. Over time grasses begin to grow, small shrubs and then eventually trees. As this progression continues, animals come to the area to feed on the plants, live and reproduce. The ecosystem reaches the climax community stage when it is mature and fully functional. The succession of events that happen after a severe disturbance in the ecosystem (like a forest fire) is called secondary succession, and it follows the same progression beginning with pioneer plants. 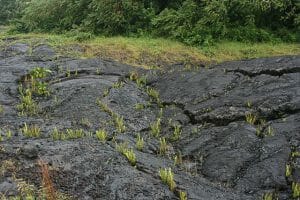 The image above shows plants beginning to grow in a lava flow in Hawaii. This is an example of primary succession in a previously unoccupied habitat.