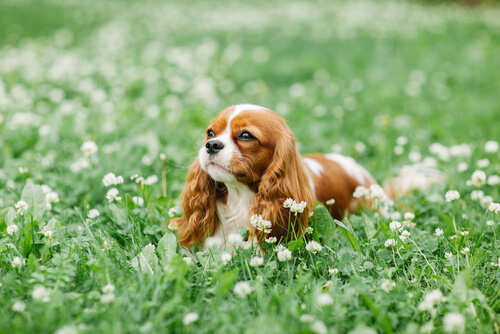 The Cavalier King Charles has a medium-length coat that is soft and smooth. Adults have wavier fur and often develop feathering on their ears, paws, and tails. Cavaliers occur in four color variants, namely, the Blenheim, which is a rich brown color on white. There is also the ‘tricolor’ Cavalier, which has black markings on a white coat with some tan over its eyes. The ‘black and tan’ variety is similar but has more tan and less white than the ‘tricolor’. Finally, ‘ruby’ Cavaliers are a rich reddish-brown color with no white markings at all. Each of these varieties has its own history. The Blenheim variety, for example, was named by the Duke of Marlborough in honor of his residence, Blenheim Palace.

The Cavalier King Charles originated in East Asia and arrived in Europe in the 1500s. They have long been linked with British royalty. Indeed, they received their namesake after King Charles II of Great Britain and Ireland who made the breed popular along with other royal family members over the centuries.

Early versions of the breed were gifted to European royalty by Japanese diplomats. It is thought that they likely share a common ancestor with the Pekingese and Japanese Chin dog. From these dogs that arrived from Asia, several modern breeds were formed including the Cavalier King Charles and the stouter, shorter-nosed King Charles Spaniel.

The breeds that became the modern-day Cavalier King Charles were initially used for hunting but eventually became obsolete in favor of larger breeds. Following the death of King Charles, the popularity of these Spaniels waned and in many places, the breed was altered by cross-breeding with flat-faced breeds. The long-nosed spaniels depicted in paintings from earlier centuries were almost extinct. Following dedicated revival efforts during the last 100 years, the breed was recognized by the Kennel Club in 1945. Eventually, it made its way to America where it was recognized by the American Kennel Club in 1995 and remains highly popular to this day.

Cavalier King Charles are popular pets due to their friendly demeanor and relatively small size. This allows them to live in apartments and other small houses. They are good with children and other pets, especially if socialized at a young age. However, like most dogs, they require a significant amount of attention and should not be left alone for long periods. Due to their slight stature, they are not known as effective guard dogs but will bark to alert their masters of others. Females typically give birth to about 5 puppies, and the average lifespan for individuals is 9-14 years.

The Cavalier King Charles Spaniel has a long and regal history and is has long been associated with British royalty. It also remains one of the most popular breeds as pets in the West.

Bred to be Happy

The Cavalier King Charles is a well-tempered dog and is often observed to almost always be wagging its tail. In fact, this is no accident. As a common show dog, breeders pay careful attention to the traits of the breed. Indeed, one trait that is commonly selected for is a tail that is almost constantly in motion while the dog is also moving. 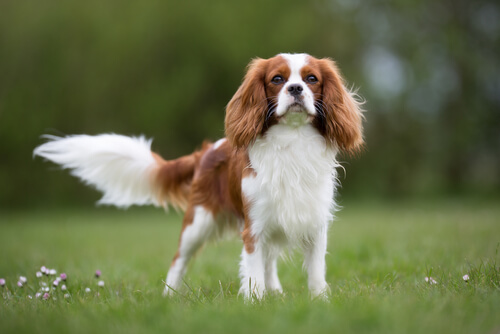 The Cavalier King Charles Spaniel is named after King Charles, who reigned in England from 1660 to 1685. It is said that he loved his spaniels so much that two or three of them would accompany him almost anywhere. This led to him decreeing that the breed can be allowed in any public space, including the House of Parliament. Although this decree still exists, it has yet to be tested in recent times.