Blue ringed octopus is a small cephalopod of the genus Hapolochlaena, which contains four known species. They are small and tend to inhabit tide pools and intertidal reef habitats. They are known for their colorful patterns of bright blue rings and their highly poisonous venom. In fact, the blue-ringed octopus is among the most venomous animals in all of the world’s oceans.

Blue ringed octopus, like all octopus, have eight arms on top of which sit a bulbous ‘mantle’. Most species are usually a dull brown or yellow color. However, when threatened, they display a bright yellow highlighted by about twenty-five bright blue rings over their bodies – a warning to others to stay away. Although it is highly venomous, the blue ringed octopus is very small, growing to 5-8 inches (12-20 cm) in length and weighing no more than 1 oz (28 g). Females tend to be larger than males, and like all octopus species, their overall size depends significantly on temperature and the availability of nutrients and light in their particular habitats. Like all other cephalopods, the blue ringed octopus uses a jet-propulsion technique of expelling water from a funnel-shaped part of its respiratory system.

Blue ringed octopuses tend to inhabit rocky areas or coral reefs in shallow, intertidal waters. Their distribution ranges from Australia to Southeast Asia, commonly found along the coastlines of the Philippines and Vanuatu, among others. They can often be found in tide pools within the intertidal or hiding in crevices along the substrate. Outside of their lairs, they will often pile rocks and other items, securing themselves in their own natural safe room, out of the reach of predators.

Despite its bright coloration meant to warn predators of its venomous threat, the blue ringed octopus still has many potential predators to avoid in its environment. Eels, birds, and fish may attempt to eat the octopus but must do so using the element of surprise. If they are able to consume it without being bitten by the octopus’ beak and injected with venom, they will survive. However, if the blue ringed octopus is able to turn the tables and attack its potential predator, the animal is likely to die. Depending on its size and the current appetite of the octopus, it may consume the animal or simply swim away.

The blue ringed octopus is predatory and uses its venom to its advantage while hunting for various animals. They will eat various types of crustaceans and will also eat fish if they are able to catch them. This often means preying on small injured fish. The small octopus pounces on its prey quickly, using its tentacle-like arms to pull the victim towards its mouth. Here, its beak pierces the prey and releases its venom, quickly paralyzing the animal and effectively killing it.

The blue ringed octopus lives for about two years, during which time females will reproduce only once. Once females reach sexual maturity, males may approach females and effectively caress her with one of its arms. If well-received, the male will grab on to the female with its other arms, and insert its sperm packets into her mantle cavity using his hectocotylus, a modified arm. 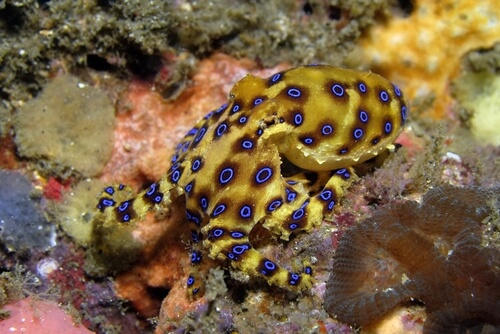 Each autumn, females lay about 50 eggs on the reef or rocky substrate of their environment. They will spend about six months incubating and caring for these eggs, often moving water over them to ensure that they are receiving sufficient oxygen. During this time, the female octopus does not eat.

Once the eggs hatch, the female dies, and her offspring will be completely independent, starting out as tiny octopuses hiding from predators on the reef. However, size doesn’t hold them back for long, as their mother’s legacy lives on in the form of the deadly venom she equipped them with, allowing them to find prey they would otherwise be unable to subdue safely. Young octopuses reach sexual maturity in about one year and repeat the process the reproductive cycle the following autumn.

For such a small and shy animal, the blue ringed octopus is both potentially deadly and highly fascinating. Like all cephalopods, it has unique abilities to change its appearance and shape while containing a deadly venom not found in many other animals. For its size, it is possibly the most venomous animal on the planet.

Despite their docile nature and small size, the blue ringed octopus can be very dangerous due to its highly poisonous venom. Generally, they are not a threat to humans. However, if handled or provoked, the blue ringed octopus’ venom packs a powerful punch. The venom contains tetrotoxin, a deadly neurotoxin that can cause motor paralysis. This is the same molecule contained in the livers of toxic pufferfish, and is actually produced indirectly by bacteria that these animals form symbiotic relationships with. This is also how they will hunt their prey, injecting them with the toxin to incapacitate them. Recent studies have shown that female blue ringed octopus will also inject this venom into their eggs, allowing them to generate their own venom before hatching.

Tetratoxin can ultimately lead to death as the paralysis extends to the smooth muscle of the diaphragm, stopping it from contracting and leading to respiratory failure. This small animal carries with it enough venom to kill twenty-six adult humans within minutes. For the treatment of a wound from the blue ringed octopus, the best chance of survival is to apply pressure to the wound while conducting artificial respiration once the victim loses their ability to breathe independently. Hospital treatment may involve ventilation until the toxin has cleared from the body, which may take 24 hours or longer.

Like all octopuses, blue ringed octopus can change their shape very easily, allowing them to fit into crevices and holes much smaller than themselves. Octopus can also change color. The blue ringed octopus often changes to a bright yellow color with each of its ring patterns on its skin flashing an iridescent blue. This all occurs almost instantly and is known as an aposematic display – effectively a warning meant to indicate that the small cephalopod means business.

Interestingly, male blue ringed octopus will mate with virtually any member of its species, regardless of size or age. Males will even attempt to mate with other males. However, these interactions are typically much shorter than sexual interactions between males and females, and the mounting male never actually transfers any sperm to the mantle of the other male, instead withdrawing its hectocotylus.