What Is Gamma Irradiation

The French chemist Paul Villard is credited with discovering gamma radiation in 1900 in the rays emitted from the element radium. Villard knew it was more powerful than the previously discovered alpha (α) and beta (ß) rays in radium, but he did not give them a name. In 1903, Ernest Rutherford recognized the radiation as fundamentally different from alpha and beta rays and named them gamma (Γ) rays. Rutherford also noted that the gamma rays were not easily deflected by a magnetic field like alpha and beta rays.

Gamma rays are high energy photons traveling at the speed of light, and they penetrate materials deeper than alpha or beta rays. Alpha rays can be shielded by the skin or a piece of paper, and a thin sheet of aluminum will stop beta rays. Gamma rays, however, need higher density materials like lead to stop them. Whether a substance absorbs gamma rays as they pass through depends on the thickness and density of the material and how far away it is from the source of the gamma rays.

Gamma rays interact with matter in three main ways: the photoelectric effect, Compton scattering, and pair production. The photoelectric effect dominates at the low end of gamma ray energies (below 50 keV). In this situation, the gamma photon causes the ejection of an electron from an atom through a transfer of energy.

In Compton scattering, the gamma photon loses so much energy in the process of ejecting an electron from another atom, that it changes to a lower energy gamma photon going in a different direction (hence the term ‘scattering’). This type of scattering happens in the energy range of 100 keV to 10 MeV. At energies over 1.02 MeV, gamma rays change energy into matter by interacting with the electric field of a nucleus.

Gamma radiation comes from gamma rays which arise primarily from four different reactions—fusion, fission, alpha decay, and gamma decay. The Earth’s sun and other stars are powered by nuclear fusion. In this reaction, four protons are forced together under extreme pressure and temperature and fuse into a helium nucleus containing two protons and two neutrons. About two-thirds of the energy emitted from is in the form of gamma rays.

In nuclear fission, gamma rays result from splitting the nucleus of heavy atoms such as uranium or plutonium. Other elements like xenon and strontium form when the nuclei split, and when these particles collide with the heavy nuclei of other atoms, it causes a nuclear chain reaction. The energy generated during these reactions is emitted as gamma rays.

The nucleus of a heavy atom becomes excited during alpha decay when the nucleus gives off an alpha particle, also called a helium nucleus, reducing (decaying) the heavy atom by reducing its mass number by four and its atomic number by two. The resulting daughter nucleus of the heavy atom, still in an excited state, decays to a lower energy level by emitting a gamma photon. This reaction is called gamma decay. 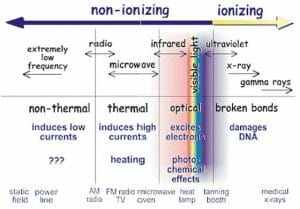 The image above shows the location of gamma rays (far right) in the electromagnetic spectrum.