A pedigree is a diagram that depicts the biological relationships between an organism and its ancestors. It comes from the French “pied de grue” (“crane’s foot”) because the branches and lines of a pedigree resemble a thin crane’s leg with its branching toes. A pedigree is used for different animals, such as humans, dogs, and horses. Often, it is used to look at the transmission of genetic disorders.

Pedigrees use a standard set of symbols to make them easier to understand. Males are represented by squares, while females are represented by circles. Parents are connected by horizontal lines, and vertical lines stemming from horizontal lines lead to the symbols for their offspring. The generations are also clearly marked with numbers, with I being the first generation, II being the children of the first generation, and III being the grandchildren, for example.

To be able to understand pedigrees, one must understand dominant and recessive genes. Some characteristics, such as height, are influenced by a variety of genes and an individual’s environment. Height cannot be easily represented by a pedigree. Pedigrees are normally used to represent simple dominant and recessive traits. For example, having a widow’s peak hairline is dominant. If an individual has that trait, their symbol on the pedigree will be shaded in. If they have no widow’s peak, their symbol will not be shaded in because having no widow’s peak is recessive.

Certain traits like colorblindness are located on the X or Y chromosome and are called sex-linked. Colorblindness is more commonly found in males because males have only one X chromosome. Females are usually not colorblind because they have two X chromosomes and would need to inherit one defective X from both their mother and father. However, they can be carriers of the trait, and if they are carriers, their male children will be colorblind. On a pedigree, carriers are represented either by a half-shaded symbol or a shaded dot in the middle of the symbol.

Why is it that two people with a dominant trait can sometimes have a child that shows the recessive trait? This can occur because people have two copies of each gene, one from their mother and one from their father. Different forms of a gene—such as widow’s peak or no widow’s peak—are called alleles. In genetics, the dominant allele is represented by a capital letter, like W, while the recessive allele is represented by a lowercase letter, like w. There are three different genotypes (genetic makeups):

People with WW and Ww will have a widow’s peak, while ww individuals will have no widow’s peak. But if two people who have the Ww genotype reproduce, they could both pass on their w allele to the offspring, who will then be ww and will show the recessive trait.

This diagram, called a Punnett square, shows the possible offspring of this heterozygotic pea plant, where purple is dominant (represented by B) and white is recessive (represented by b).

This pedigree shows an autosomal dominant trait or disorder. Autosomal means the gene is on a chromosome that is not a sex chromosome (X or Y). Not all of the offspring inherited the trait because their parents were heterozygous and passed on two recessive genes to those that do not show the trait. None of the offspring of two recessive individuals have the trait. Examples of autosomal dominant disorders are Huntington’s disease and Marfan syndrome. 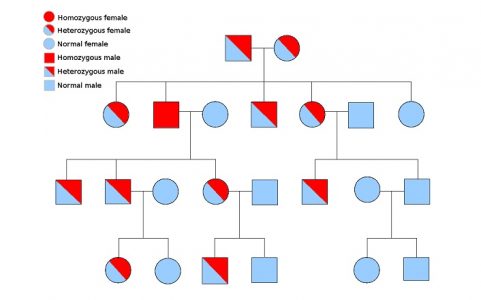 This pedigree is of an autosomal recessive trait or disorder. The completely red square represents a male that is homozygous recessive and has the trait. All of the half-shaded individuals are carriers; they do not exhibit the trait because it is recessive, but they could pass it on to their offspring if their partner is also a heterozygote. Autosomal recessive disorders include cystic fibrosis and Tay-Sachs disease. 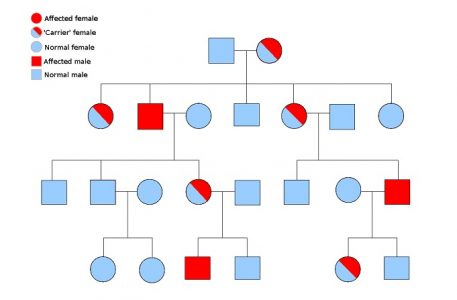 1. Which genotype represents a heterozygous individual?
A. AA
B. Aa
C. aa
D. A and C


Answer to Question #1
B is correct. The individual is heterozygous because they have two different alleles, A and a, for a trait. AA and aa individuals are homozygous; they have two of the same alleles.

2. An individual that shows a dominant trait could have one of what two genotypes for that trait?
A. AA or aa
B. Aa or aa
C. AA or Aa