An organ is a self-contained group of tissues that performs a specific function in the body. The heart, liver, and stomach are examples of organs in humans. The word organ comes from the Latin organum, which means “instrument”. This in turn comes from the Greek word ὄργανον (órganon), which refers to a musical instrument or “organ of the body”. Organs are found in most animals and plants.

All animals except for less specialized ones like those in the phylum Porifera (sea sponges) have specialized tissues grouped into organs. The human body has 78 different organs. The largest organ is the skin, while the smallest organ is the pineal gland, which produces the hormone melatonin. Some organs are necessary for survival; these are called vital organs. Humans have five vital organs that they cannot live without: the brain, heart, liver, kidneys, and lungs. (A person can live with one kidney instead of two, or one lung, but they must have one working kidney or lung to survive.)

Other organs perform important functions, but a person can live without them. For example, if a person has stomach cancer and undergoes a total gastrectomy, their entire stomach is removed, and their esophagus is surgically connected to their small intestine. They may suffer some hardships and may have to alter their diet by eating smaller meals and taking nutritional supplements, but they can still digest food in their intestines just fine, and can therefore live without a stomach. Other examples of non-essential organs include the bladder, spleen, and gallbladder.

Some organs are vestigial, meaning that they perform little or no function in the body. Evolutionarily, over time, they have become unnecessary. The appendix, a small tube connected to the large intestine that can sometimes become inflamed and require removal, has been widely thought to be vestigial. It no longer has a significant role in digestion. However, it does still play a role in immune functioning and maintaining good gut bacteria.

Although we may think of plants as being simpler than animals, plants also have organs. This includes reproductive organs such as stamens and pistils (contained in flowers), roots, stems, and leaves. Each of these organs performs specialized tasks such as reproduction, absorbing nutrients from the soil, and performing photosynthesis.

There are four different levels of organization in multicellular organisms, and organs make up one of these levels. From simplest to complex, an organism is made up of cells, tissues, organs, and organ systems. Cells make up the most basic level of organization; the cell is the building block of a living organism. This is followed by tissues. Tissues are groups of cells that work together and have a similar structure and function. The four types of tissues in the human body are muscle, epithelial, connective, and nervous tissue. Organs, as stated before, are groups of tissues that work together to perform a certain function. Organ systems represent the highest level of an organism’s bodily organization. They are made up of groups of organs that work together in order to carry out a certain function. For example, the digestive system includes organs such as the esophagus, stomach, small intestine, and large intestine, and all of these organs play a role in the digestion of food.

The body’s organs are grouped into organ systems based on the functions they perform. Humans have 11 different organ systems. Here are all of the organ systems with some examples of organs found in each system:

This image depicts parts of the circulatory system, including the heart, arteries, and veins: 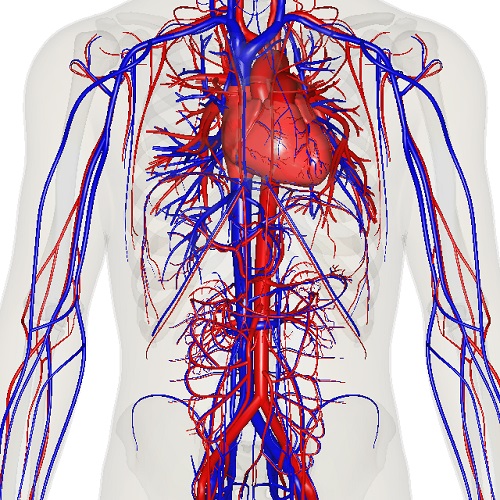 1. Organs are self-contained groups of what?
A. Organ systems
B. Tissues
C. Cells
D. Organisms

2. Which is NOT a vital organ in humans?
A. Bladder
B. Brain
C. Heart
D. Liver

Answer to Question #2
A is correct. The bladder performs an important role in collecting urine that is to be excreted from the body, but it is not necessary for a person to have a bladder in order to survive. If the bladder is removed during a process called a cystectomy, which is sometimes performed on a patient with bladder cancer, a person can still survive. Instead, urine will be collected outside the body in a urostomy bag. The five vital organs that are needed for survival in humans are the brain, heart, liver, kidneys, and lungs.

3. Which living thing does not have organs?
A. Shark
B. Apple tree
C. Horse
D. Sea sponge

Answer to Question #3
D is correct. Sea sponges are multicellular and classified as animals, but they are very simple; they do not have any organs or even true tissues. Instead, they are made up of groups of cells. Other animals and plants have specialized tissues and organs.