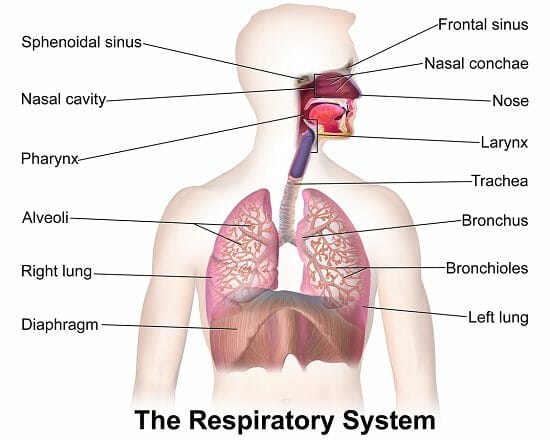 This figure depicts the respiratory system.

The human organ systems are:

The integumentary system consists of external organs that protect the body from damage, including the skin, fingernails, and hair. Skin is the largest organ of the human body. It is made up of three layers: the epidermis, dermis, and hypodermis, which contains stored body fat. Nails and hair are both made up of the protein keratin. In other animals, the integumentary system may include feathers, scales, or hooves.

Besides protecting the internal organs from physical damage, the integumentary system has multiple other functions such as protecting against virus invasion, dehydration, sunburns, and changes in temperature, making Vitamin D through sun exposure, and excreting waste through sweating.

The skeletal system is made up of all the bones in the human body, i.e., the skeleton. The skeleton forms the supporting structure of the body. It comes from the Greek σκελετός (skeletós), meaning “dried up”, referring to the dry nature of bones. A human infant has 270 bones, some of which fuse together to form the 206 bones in the adult human body. Cartilage is the precursor to bone when an embryo is developing, and it is found in some structures in the human body such as the nose, ears, and joints.
An internal support structure in an animal is called an endoskeleton. Some animals such as insects have hard coverings called exoskeletons on the outside instead of inside the body.

The muscular system includes the different types of muscles in the body: cardiac, smooth, and skeletal muscles. Cardiac muscles are found only in the heart and contract to pump blood. Smooth muscles are found in organs such as the stomach, intestines, and bladder and move without conscious effort by the organism. Skeletal muscles are attached to bones and work together with bones to move the body.

The circulatory system, also known as the cardiovascular system, consists of the heart, veins, arteries, and capillaries. The circulatory system circulates blood throughout the body in order to transport nutrients and oxygen to the cells. The lymphatic system, which includes lymph and lymph nodes, is also part of the circulatory system; lymph transports fats, destroys bacteria, and returns proteins and interstitial fluid from the bloodstream.

The respiratory system is made up of the organs used for breathing, including the lungs, diaphragm, trachea, bronchi, and bronchioles. In the lungs, oxygen and carbon dioxide are exchanged between the outside air and the blood. Other animals breathe through gills or even through their skin.

The digestive system digests food and absorbs it into the body. It is made up of the gastrointestinal tract (which includes the esophagus, stomach, liver, and intestines) along with accessory organs of digestion. These include the tongue, liver, pancreas, and gallbladder.

The endocrine system is comprised of all the glands in the body that produce hormones, which are carried via the bloodstream to affect other organs. Some important glands are the pituitary gland, which produces reproductive and many other body-regulating hormones; the thyroid, which has roles in metabolism and protein synthesis; and the adrenal glands, which produce adrenaline and stimulate the fight-or-flight response.

1. Which organ is NOT a part of the nervous system?
A. Brain
B. Nerves
C. Heart
D. Spinal cord


Answer to Question #1
C is correct. The brain, spinal cord, and nerves make up the nervous system. These organs function together to control the body’s movements and to send and receive signals to and from the other parts of the body. The heart is not a part of the nervous system; it is part of the circulatory system.

2. Which organ system is made up of all the glands that produce hormones?
A. The immune system
B. The muscular system
C. The endocrine system
D. The integumentary system

3. What is the function of the respiratory system?
A. To digest food and absorb its nutrients into the body
B. To form a supporting structure for the body’s other organs
C. To circulate blood throughout the body and transport oxygen and nutrients to cells
D. To take in oxygen and expel carbon dioxide when an organism breathes