Mastication is the mechanical grinding of food into smaller pieces by teeth; it is essentially a technical word for “chewing”. Mastication breaks down food so that it can go through the esophagus to the stomach. Breaking down food into smaller pieces also increases its surface area so that digestive enzymes can continue to break it down more efficiently. Muscles involved in mastication include the masseter, temporalis, medial pterygoid, and lateral pterygoid.

Mastication is step one of the digestion process. It breaks down food into smaller pieces so that it can be further digested by enzymes. Many different bones, such as the teeth and mandible (jaw bone), and muscles like the tongue and jaw muscles all work together to enable a person to chew food. Mastication should not be confused with maceration, which is the breaking down of food into chyme in the stomach.

Chewing originated with the evolution of herbivory in animals. Those animals that ate plants needed to grind them up before swallowing, and flat teeth such as molars were most efficient for masticating plant material. Carnivores, which have pointy canine teeth, do very little chewing of their food, sometimes even eating it whole. Humans are omnivores; we eat both plants and animals. This is reflected by the variety of shapes of our teeth. We have both molars and canine teeth in addition to premolars and incisors (front teeth).

The temporalis (also called temporal) muscle is a large, semi-circle-shaped muscle that reaches from the molars to the temples and curls back around to the approximate location of the ear. It is the strongest muscle in the temporomandibular (jaw) joint. The anterior, or front, part of the muscle helps close the mouth, while the posterior, or back, part of the muscle moves the jaw backward in a movement known as retrusion.

The medial pterygoid muscle is a thick muscle that is located from the back of the molars to just under eye level (it is located behind the orbits). It has many functions including closing the jaw, moving the jaw back to the middle if excursion (side-to-side movement) has occurred, and aiding in protrusion of the mandible, which is when the jaw moves forward.

The lateral pterygoid muscle is located above the medial pterygoid. It can lower the jaw and move the jaw from side to side (excursion). It also helps move the jaw forward. It is the only muscle involved with mastication that opens the jaw; all the others help close the jaw.

The masticatory cycle is the pathway that the mandible takes while chewing food. During the opening phase, the mandible is depressed, which means that is opened; it is lowered to create space to take in food. During the closing phase, the jaw closes. This action is performed mainly by the masseter, temporalis, and medial pterygoid muscles. The third phase is the occlusal phase. During this phase, the teeth make contact with one another and the chewing motion is completed. Then the cycle begins again, with the jaw opening and closing and the teeth occluding until the food has been chewed enough to swallow.

The temporomandibular joint, or TMJ, is the jaw joint. It is named for the temporal bone and the mandible, which are two bones that articulate at this joint. The mandible is moved by the four muscles of mastication, while the temporal bone remains in one place; in other words, mastication is accomplished by moving only the lower jaw.

Experiencing pain, limited movement, and popping noises when opening the mouth is called temporomandibular joint dysfunction (TMD). It is relatively common, affecting 20-30% of the adult population worldwide; it also affects more women than men. Other symptoms include headache, a feeling of pressure on the jaw, and dizziness. Often, TMD can become chronic. It can be treated with medication, eating soft foods, physical therapy, and even cognitive-behavioral therapy to reduce stress since stress can exacerbate symptoms. Extreme measures such as surgery are avoided since they are invasive and cannot be easily reversed if problems occur. 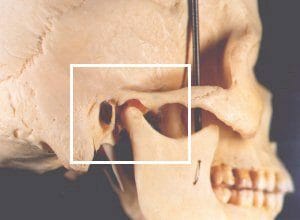 This image of a human skull shows the location of the TMJ.

Mastication is performed mostly unconsciously; we do not have to think about the movements of muscles, the TMJ and the tongue when chewing food. The way our brains organize a series of movements is called a motor program. The actions of mastication are thought to be one such motor program controlled by the central nervous system. Chewing and swallowing are largely unconscious, but we do learn to adjust the way we chew based on the type of food consumed (e.g. hard, soft) or the way the teeth meet in the mouth when the jaw closes.

1. Which muscle of mastication is involved with opening the jaw?
A. Masseter
B. Temporalis
C. Medial pterygoid
D. Lateral pterygoid

2. What is the first step of digestion?
A. Mastication
B. Maceration
C. Absorption of nutrients
D. Excretion


Answer to Question #2
A is correct. Mastication is the first step of the digestive process. After food has been masticated in the mouth, it travels to the stomach, where it is macerated into semi-digested, partially liquid material called chyme. Nutrients from chyme are absorbed in the intestines, and the leftover material, fecal matter, is excreted.

3. Which type of treatment is a last resort for treating TMD?
A. Surgery
B. Eating soft foods
C. Cognitive-behavioral therapy
D. Physical therapy


Answer to Question #3
A is correct. When treating temporomandibular joint dysfunction, surgery is avoided since it is such a drastic measure. Preferred treatments involve managing and avoiding pain, such as by taking medications and eating soft foods. Physical therapy and/or cognitive-behavioral therapy may also be used.