Linked genes are genes that are likely to be inherited together because they are physically close to one another on the same chromosome. During meiosis, chromosomes are recombined, resulting in gene swaps between homologous chromosomes. If genes are close together, the chances of being recombined are higher than if they are far away from each other. It is impossible for linked genes to be on different chromosomes.

The following figure shows how homologous recombination occurs during meiosis:

In this figure, the cell on the left originally has two different copies (gray and pink) of two different chromosomes (large and small). Each copy has the same genes as the other copy but is very likely to have different alleles; that is why they are shown in different colors.

Recombination takes place in the fourth panel of the figure: the DNA of two homologous sister chromatids are cut and rejoined. This step is also illustrated and can be seen more clearly here: 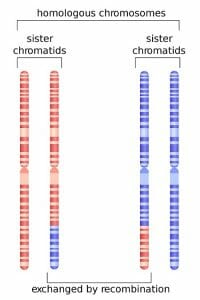 One chunk of the DNA has been swapped between homologous chromosomes, resulting in a new combination of alleles. Importantly, the site at which this DNA cut occurs is mostly random. Furthermore, meiosis occurs every time new gametes are formed; therefore, the cut is in a different location along the DNA, leading to numerous possible combinations.

In the next step (fifth panel in the figure), the cell divides into two, with the two daughter cells receiving two copies of each chromosome, each copy carrying different alleles and also the recombined DNA.

In the last step (sixth panel), the two daughter cells divide again without replicating their DNA, leading to four daughter cells, each with one copy of each chromosome. Notice how the recombined DNA makes the daughter cells different from one another.

It is very common to find people with freckles and red hair. In fact, this occurs way more often than it would by chance; otherwise, many blonde or brunette people would have freckles more often, and fewer red-haired people would have freckles. This happens because the genes that code for freckles and the genes that code for red hair sit close together on the same chromosome. When homologous recombination occurs, it is very unlikely that the DNA will be cut in between the two genes. Although homologous recombination happens numerous times, these two features are inherited together most of the time because the chances that the DNA coding for these two genes is split up are very low, consequently leading to the genes being inherited together most of the time.

Scientists have developed ways to figure out where the genes are located based on the frequencies of recombination. This is done by analyzing the offspring of an organism such as fruit flies (Drosophila melanogaster).


Answer to Question #1
D is correct. Linked genes that sit on the same chromosome and are likely to be inherited together because they are usually not separated during recombination.


Answer to Question #2
C is correct. During homologous recombination, the DNA is cut at random places and the genes are swapped between sister chromatids. If the genes sit very close together on the same chromosome, they are very unlikely to be split up when this happens.