Glycolysis is a metabolic process at the start of the chain of reactions within the process of cellular respiration – production of cellular energy. It occurs in the presence or absence of oxygen to enable aerobic and anaerobic cellular respiration. The glycolysis pathway converts one glucose (sugar) molecule into two pyruvate molecules; this ten-step conversion occurs in the presence of specific enzymes in the cell cytosol. Glycolysis is sometimes called the Embden-Meyerhof-Parnas or EMP pathway after the scientists that first proposed this mechanism. 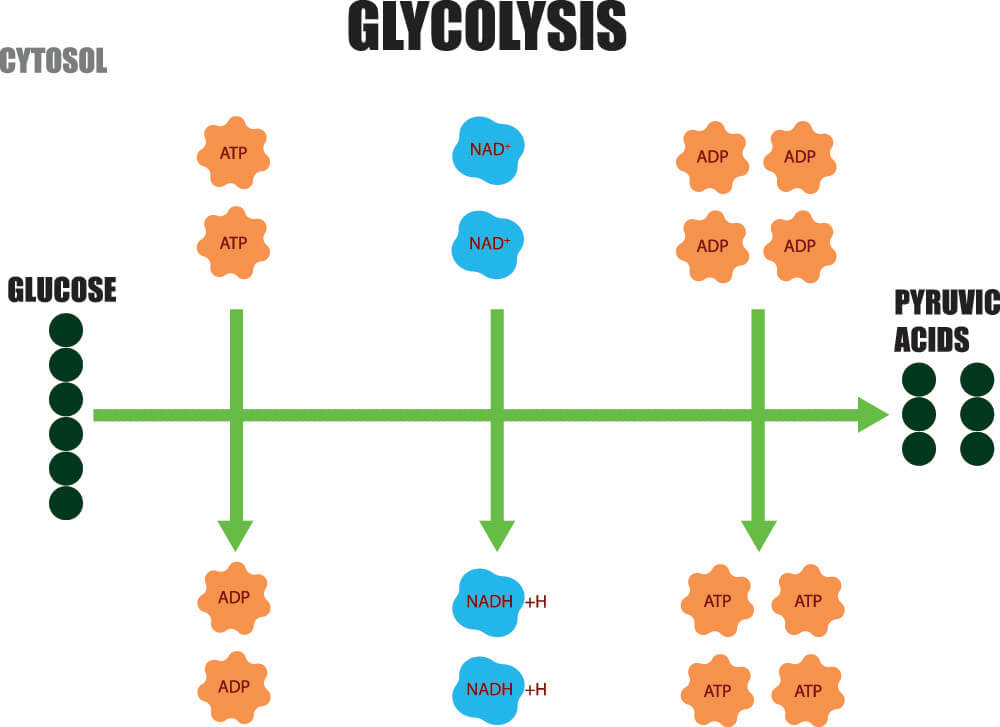 To properly understand this glycolysis formula, we should look at the separate components.

Glucose is named after the Greek word for ‘sweet’. It is a simple, easily-converted form of carbohydrate and a monosaccharide. Glucose is stored as glycogen in animals or as free sugar in the blood. When the body needs energy, glycogen is broken down into glucose via glycogenolysis. We also ingest quantities of glucose in our diet, usually within more complex sugars such as disaccharides and polysaccharides. Glucose is one of the three simplest components of dietary sugars; the others are fructose and galactose.

Glucose contains six carbon atoms, twelve hydrogen atoms, and six oxygen atoms. The prefix that relates to the number six – hex – tells us why glucose is a hexose; ‘ose’ is the chemical suffix that tells us it is a sugar. This is also the same for fructose and galactose, although the molecular structure differs.

Nicotinamide adenine dinucleotide comes in two forms – oxidized (NAD+) and reduced (NADH). You can see that the oxidized form has a positive charge. This gives us an indication of its role as an electron carrier. The oxidized form accepts electrons from glucose and, by doing so, NAD+ becomes NADH. At a later stage, NADH donates electrons to oxygen and once again becomes NAD+. This reoxidation reaction is necessary to sustain glycolysis. Both NAD forms act as a single coenzyme – a chemical carrier molecule that supports enzyme activity.

Inorganic phosphate is a glycolysis reactant. It provides the phosphoryl group that is important throughout the glycolysis steps described further on.

It is the conversion of adenosine triphosphate (ATP) into adenosine diphosphate (ADP) that provides energy in the mitochondria of cells. As these names suggest, ADP contains two phosphate molecules and ATP contains three. When ATP releases one of its phosphate groups to become ADP, the energy that once bound the phosphate becomes free. This energy can then be used to drive other cellular functions.

To reattach the phosphate and so provide a future source of energy, we need to produce more energy than we expend. When glucose is not available we can convert lipids into energy. Without energy in the form of ATP, a cell cannot function and will die.

Where Does Glycolysis Occur?

If you are asked, “where does glycolysis take place?”, there is only one correct answer. In the cell cytoplasm.

Glycolysis does not describe the entire energy-producing process in the cell. It is an early step that precedes the citric acid cycle where ATP is produced in higher quantities from acetyl-CoA – a derivative of pyruvate.

While the final stages of cellular respiration occur inside the mitochondria of cells, glycolysis – as an early stage – does not. Glycolysis occurs in the cell cytosol.

Aerobic glycolysis and anaerobic glycolysis steps are the same. This mechanism does not need oxygen and, therefore, exists either in the presence or absence of O2. This cannot be said of the entire cell respiration process where anaerobic and aerobic pathways differ.

The glycolysis process is divided into ten steps.

Step One: Phosphorylation of Glucose

Step one is the phosphorylation of glucose. Here, ATP releases one phosphate and becomes ADP. The released phosphate binds to the oxygen that is attached to the sixth carbon of the glucose molecule. The glucose now becomes glucose-6-phosphate (G6P) – a more reactive product that is unable to leave the cell via the phospholipid bilayer thanks to the additional phosphate group.

The enzyme that enables glucose phosphorylation is hexokinase. Hexokinase catalyzes (speeds up) phosphorylation in hexoses (sugars with six carbons). Positively-charged magnesium ions are essential to the process as these bind to ATP and ADP during the transfer of the negatively-charged phosphate group. This enables hexokinase to do its work unhindered. Mg2+ is a glycolysis cofactor and is required for all of its electron transfer processes.

An isomer is a molecule with the same chemical formula but a different structure.  The oxygen atom attached to the first carbon (C1) of G6P is transferred to the second carbon (C2). This changes the structure of glucose-6-phosphate. The result is an isomer as no atoms have been added or taken away. This isomer is called fructose-6-phosphate (F6P).

The enzyme that helps to transfer the oxygen atom and form a G6P isomer is called phosphoglucoisomerase or glucose phosphate isomerase.

It is possible to reverse isomerization and produce G6P again; however, this only occurs if quantities of F6P are extremely high. The move into step three prevents the reversal of G6P isomerization.

With the help of the phosphofructokinase enzyme, F6P is phosphorylated to produce fructose-1,6-bisphosphate (F1,6DP). Biphosphate tells us that another ATP molecule has transferred its phosphate and become ADP (in the presence of magnesium ions). The energy produced by this reaction, as with glucose phosphorylation, produces a little heat. Two charged phosphate groups have now been added.

Cleavage refers to the splitting of the F1,6DP molecule into two sugars – dihydroxyacetone phosphate (DHAP) and glyceraldehyde-3-phosphate (GAP). As both sugars have the same numbers of carbon, oxygen, hydrogen, and phosphate but have different structures, they are isomers of each other. The structure of GAP enables it to be used in step six. DHAP must be further converted in step five.

The enzyme used in the cleavage process is called fructose diphosphate aldolase.

As mentioned in the step above, DHAP must be isomerized into GAP as only GAP is used in later glycolysis stages. This occurs under the influence of the enzyme phosphotriose isomerase (triose phosphate isomerase).

Step five is the final preparatory stage of glycolysis and signals the end of the first stage. This stage uses two ATP molecules per glucose molecule. No pyruvate has been formed; however, the original six-carbon glucose has now been converted into two sugars containing only three carbons each.

Now all the three-carbon sugars are the same, the second phase of glycolysis can commence. This is an energy-conserving stage and does not require the conversion of ATP to ADP. The next phase is also known as the glycolysis pay-off phase.

Two events occur during step six. Free phosphate not attached to ATP is used in the phosphorylation of GAP. This is made possible by the enzyme glyceraldehyde 3-phosphate dehydrogenase (GAPDH). GAPDH fixes the GAP into a structure whereby a molecule of NAD+ coenzyme, described under an earlier heading, can oxidize it. NAD+ removes one negatively-charged hydrogen ion from GAP and is reduced to NADH and H+. This makes conditions right for a free phosphate to replace the GAPDH bound to GAP. The resulting sugar is called 1,3 diphosphoglycerate.

Energy can now begin to be produced. Through the enzyme phosphoglycerate kinase, a phosphate group is transferred from 1,3 diphosphoglycerate to ADP. This reaction produces ATP and 3-phosphoglycerate. For every glucose molecule, two smaller monosaccharides are produced, so this step produces two ATP molecules for every glucose that goes through glycolysis. As with other phosphorylation processes, magnesium ions are essential to prevent the negative charges of phosphate groups from pushing other negatively-charged groups away.

However, steps one and three required two ATP molecules. This means the net energy profit is zero at step seven. To generate more energy than it uses, the glycolysis cycle must continue.

Dehydration describes the loss of water. One glucose molecule produces two molecules of water in step nine. When one oxygen and two hydrogen atoms are removed from 2-phosphoglycerate under the influence of the enzyme phosphopyruvate hydratase (enolase), it becomes phosphoenolpyruvate (PEP).

This is the first time the word pyruvate appears in the glycolysis pathway.

The final stage of glycolysis produces energy excess. Step ten is an energy-generating step. The enzyme pyruvate kinase removes the phosphate group on the second carbon of each PEP. The phosphate is transferred to ADP in the presence of magnesium ions. Without this phosphate group, PEP becomes pyruvate.

The products of glycolysis from one molecule of glucose are:

Pyruvate is an essential component of the citric acid cycle. This pyruvate is broken down to produce acetyl-CoA, the central molecule of the Krebs cycle. Glycolysis is, therefore, the method by which a cell can manufacture enough acetyl CoA to produce energy. Unlike glycolysis, the citric acid or Krebs cycle takes place in the mitochondria and only occurs in the presence of oxygen. However, the central components are very similar, including NADH, enzyme activity, pyruvate, and ATP.