There are two main soil types found in deciduous forests.

Alfisols constitute 10% of the land area on Earth. These are nutrient-rich and fertile soils found in north-central Europe, the north-central United States, northeastern Brazil and southern Australia. The main crops grown in this type of soil are corn, wheat and grapes used to make wine. Alfisols tend to be found in cooler climates than ultisols (see below).

The chemical makeup of alfisols is rich in minerals that have aluminum and iron but little calcium carbonate. A cross-section of alfisol soil will reveal a layer of silicate clay that has migrated down from the surface. Calcium, potassium, magnesium and sodium ions are found in this area which is also called the argillic horizon. 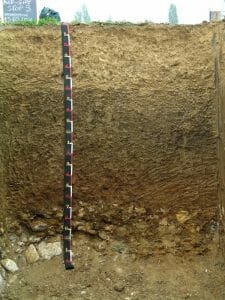 The image above shows the profile of an alfisol soil in Italy.

About 8% of Earth’s land area consists of ultisol soil which tends to have a reddish-yellow color. The soils are acidic and have a lot of clay but they can be converted to agricultural use by applying lime fertilizer. Ultisols are found in humid tropical regions of the world such as South America and Africa and the humid temperate regions of the southeastern United States like Florida and Louisiana.

The surface of ultisols is humus-rich and it has a layer of clay deeper down like alfisols but it lacks available magnesium, potassium and sodium in the layers that are extensively leached. Throughout the layers of soil is found kaolin clay minerals and metal oxides that give the soil red and yellow (bleached-looking) layers. 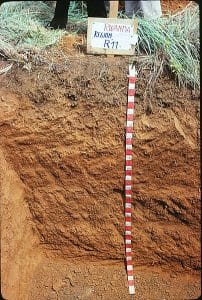 The image above shows the profile of a ultisol soil in Rwanda.