The cell cycle is a cycle of stages that cells pass through to allow them to divide and produce new cells. It is sometimes referred to as the “cell division cycle” for that reason.

New cells are born through the division of their “parent” cell, producing two “daughter” cells from one single “parent” cell.

Daughter cells start life small, containing only half of the parent cell’s cytoplasm and only one copy of the DNA that is the cell’s “blueprint” or “source code” for survival. In order to divide and produce “daughter cells” of their own, the newborn cells must grow and produce more copies of vital cellular machinery – including their DNA.

The two main parts of the cell cycle are mitosis and interphase.

Mitosis is the phase of cell division, during which a “parent cell” divides to create two “daughter cells.”

The longest part of the cell cycle is called “interphase” – the phase of growth and DNA replication between mitotic cell divisions.

Both mitosis and interphase are divided into smaller sub-phases which need to be executed in order for cell division, growth, and development to proceed smoothly. Here we will focus on interphase, as the phases of mitosis have been covered in our “Mitosis” article.

Interphase consists of at least three distinct stages during which the cell grows, produces new organelles, replicates its DNA, and finally divides.

Only after the cell has grown by absorbing nutrients, and copied its DNA and other essential cellular machinery, can this “daughter cell” divide, becoming “parent” to two “daughter cells” of its own.

The graphic below shows a visual representation of the cell cycle. The small section labeled “M” represents mitosis, while interphase is shown subdivided into its major components: the G1, S, and G2 phases. 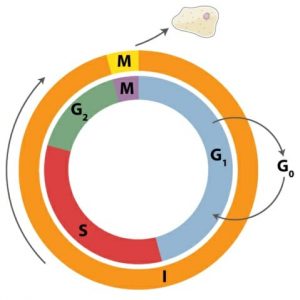 This cell cycle is used by all eukaryotic cells to produce new cells. Prokaryotic cells such as bacteria use a process called “binary fission.”

For some unicellular eukaryotes, the cell cycle is the same as the reproductive cycle. Their “daughter cells” are independent organisms that will go on to reproduce themselves through mitosis.

In other organisms, the cell cycle is used for growth and development of a single organism, while other methods are used to reproduce the organism.

Animals and some plants, for example, create new offspring through a process of sexual reproduction which involves the creation and combination of special sex cells.

But animals and plants still use the cell cycle to produce new cells within their tissues. This allows these multicellular organisms grow and heal throughout their lifespans.

Because cells reproduce by dividing, new “daughter” cells are smaller than their parent cells, and may inherit the bare minimum of cellular machinery they need to survive.

Before these daughter cells can divide to produce still more cells, they need to grow and reproduce their cellular machinery.

The importance of the cell cycle can be understood by doing simple math about cell division. If cells did not grow in between divisions, each generation of “daughter” cells would be only half the size of the parent generation. This would become unsustainable pretty quickly!

In order to accomplish this growth and prepare for cell division, cells divide their metabolic activities into distinct phases of Gap 1, Synthesis, Gap 2 between cell divisions.

The complete cell division cycle will be discussed below.

You can read more about the detailed steps of mitosis and how a parent cell makes sure its daughter cells will inherit what they need to survive in our article on Mitosis (https://biologydictionary.net/mitosis/).

Each of the new “daughters” are now independently living cells. But they’re small, and have only one copy of their genetic material.

This means they can’t divide to produce their own “daughters” right away. First, they must pass through “interphase” – the phase between divisions, which consists of three distinct phases.

In G1 phase, the newly formed daughter cell grows. The “G” is most often said to stand for “gap,” since these phases appear to an outside observer with a light microscope to be relatively inactive “gaps” in the cell’s activity.

However given what we know today, it might be more accurate to say the “G” stands for “growth” – for the “G” phases are flurries of protein and organelle production as well as literal increase in the size of the cell.

During the first “growth” or “gap” phase, the cell produces many essential materials such as proteins and ribosomes. Cells that rely on specialized organelles such as chloroplasts and mitochondria make a lot more of those organelles during G1 as well. The cell’s size may increase as it assimilates more material from its environment into its machinery for life.

This allows the cell to increase its energy production and overall metabolism, preparing it for…

During S phase, the cell replicates its DNA. The “S” stands for “synthesis” – referring to the synthesis of new chromosomes from raw materials.

This is a very energy-intensive operation, since many nucleotides need to by synthesized. Many eukaryotic cells have dozens of chromosomes – huge masses of DNA – that must be copied.

Production of other substances and organelles is slowed greatly during this time as the cell focuses on replicating its entire genome.

When the S phase is completed, the cell will have two complete sets of its genetic material. This is crucial for cell division, as it ensures that both daughter cells can receive a copy of the “blueprint” they need to survive and reproduce.

However, replicating its DNA can leave the cell a little bit depleted. That’s why it has to go through…

Just like the first “gap” phase of the cell cycle, the G2 phase is characterized by lots of protein production.

During G2, many cells also check to make sure that both copies of their DNA are correct and intact. If a cell’s DNA is found to be damaged, it may fail its “G2/M checkpoint” – so named because the this “checkpoint” happens at the end of the G2 phase, right between G2 and “M phase” or “Mitosis.”

This “G2/M checkpoint” is a very important safety measure for multicellular organisms like animals. Cancers, which can result in the death of the entire organism, can occur when cells with damaged DNA reproduce. By checking to see if a cells’ DNA has been damaged immediately before replication, animals and some other organisms reduce the risk of cancer.

Interestingly, some organisms can skip G2 altogether and go straight into mitosis after DNA is synthesized during S phase. Most organisms, however, find it safer to use G2 and its associated checkpoint!

Unless of course they’re meant for…

After being born through mitosis, some cells are not meant to divide themselves to produce daughter cells.

Neurons, for example – animal nerve cells – do not divide. Their “parent cells” are stem cells, and the “daughter” neuron cells are programmed not to go through the cell cycle themselves because uncontrolled neuron growth and cell division could be very dangerous for the organism.

So instead of entering G1 phase after being “born,” neurons enter a phase scientists call “G0 phase.” This is a metabolic state meant only to maintain the daughter cell, not prepare for cell division.

Neurons and other non-dividing cell types may spend their whole lives in G0 phase, performing their function for the overall organism without ever dividing or reproducing themselves.

It’s very important for the survival of cells and organisms that the cell cycle be regulated.

To accomplish this, cells use a variety of chemical “signal cascades” where multiple links in a chain create complex effects based on simple signals.

In these regulatory cascades, a single protein may change the function of many other proteins, bringing about widespread changes to the functioning or even structure of the cell.

Some examples of cell cycle regulation are given below.

p53 is a protein that is well-known to scientists for its role in stopping cells with severe DNA damage from reproducing.

When DNA is damaged, p53 works with cyclin-dependent protein kinases and other proteins to initiate repair and protection functions – and can also stop the cell from entering mitosis, ensuring that cells with DNA damage do not reproduce.

A few others, such as G1 cyclins, remain high as a constant “go ahead” signal from G1 until mitosis.

The cell’s cyclins ultimately do their jobs by interacting with Cyclin-Dependent Protein Kinases – that is, kinases that activate certain enzymes and proteins when they bind to a cyclin. This allows cyclins to function as the “go” signal for many changes in cellular activity that happens throughout the cell cycle.

Protein kinases are a special set of enzymes that “activate” other enzymes and proteins by affixing phosphate groups to them. When an enzyme or other protein is “activated” by a kinase, its behavior changes until it returns to its inactivated form.

This is something that would be very dangerous at other points in the cell cycle, but which is necessary during mitosis so that the chromosomes can be sorted to ensure that each daughter cell receives a copy of each chromosome.

If M cyclins do not appear, MPF does not activate, and mitosis cannot go forward. This is a good example of how cyclins and cyclin-dependent kinases work together to coordinate – or stop – the cell cycle.

Ingeniously, the protein kinase MPF doesn’t just ensure that the nuclear envelope breaks down during mitosis – it also ensures that MPF levels will fall after the nuclear envelope is broken down. It does this by activating the Anaphase-Promoting Complex/Cyclosome, or “APC/C” for short.

As its name suggests, the APC/C promotes passage into Anaphase – and one of the ways it does that is by breaking down MPF, a messenger from a previous phase. So MPF actually activates the very proteins that destroy it.

The destruction of MPF by the APC/C ensures that the actions MPF promotes – such as the disintegration of the nuclear envelope – do not happen again until the daughter cell makes more MPF after passing through G1 phase, S phase, and G2 phase.

By activating the APC/C, MPF regulates itself!


Answer to Question #1
D is correct. Cells must go through interphase in order to grow, copy their DNA, and ensure that they are prepared to create a healthy new generation of daughter cells.

2. Which of the following organism would you NOT expect to use the cell cycle described here?
A. A daisy
B. A kitten
C. An archaebacteria
D. None of the above


Answer to Question #2
C is correct. Archaebacteria and “true bacteria” are prokaryotes. They reproduce using a similar, but simpler cycle of growth and division.

3. Which of the following is true of the G2 phase?
A. It is when the cell’s DNA is copied.
B. It is the first phase of the cell cycle after mitosis.
C. It contains the important G2/M checkpoint which checks the cell for DNA damage before allowing it to reproduce.
D. None of the above.


Answer to Question #3
C is correct. The G2 phase is the last phase before mitosis – and the site of the vital G2/M, which makes cancer less likely by preventing cells with severe DNA damage from reproducing.