Carcinoma is a term used to describe cancer derived from epithelial cells that line various tissues throughout the body. In addition, malignant tumors that have an unknown primary origin, but share histological characteristics with epithelial cells (e.g., stratification, pseudostratification, cytokeratin production, mucin, etc.) are also classified as carcinomas. Depending on the location, carcinomas can be surgically removed, or treated with conventional radiation or chemotherapy.

Carcinomas are classified based on the histological features that they exhibit. The following terms are used to describe the most common types of carcinomas.

Adenocarcinomas are carcinomas which are derived from glandular epithelial cells or exhibit glandular characteristics. Thus, the cells often exhibit structural and molecular features consistent with glandular tissue (see below). Adenocarcinomas are some of the most common types of cancer, of which the pancreas, breast, and cervix are the most frequently affected organs. This is largely attributed to the fact that breast, colorectal, and genital tissues are highly glandular. 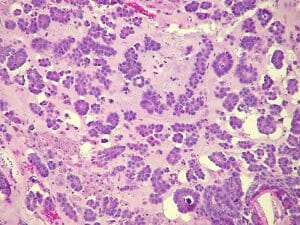 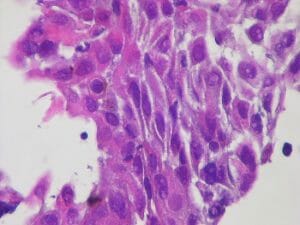 Anaplastic carcinomas are carcinomas that lack specific histological or morphological hallmarks of differentiated cells. In these types of cells, the nucleus to cytoplasm ratio is altered such that the nucleus is highly enlarged and hyperchromatic, indicative of an elevated proliferative potential. Moreover, the enlarged nuclei are often irregularly shaped and exhibit a complete loss in cellular polarity. 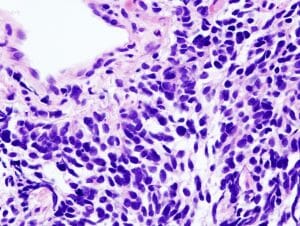 1. The histological analysis of a lung biopsy from a suspicious lesion of a smoker reveals cells smaller than lymphocytes, exhibiting minimal cytoplasm. This type of carcinoma is best described as:
A. Squamous cell carcinoma
B. Adenocarcinoma
C. Adenosquamous carcinoma
D. Small cell carcinoma


Answer to Question #1
D is correct. Small cell carcinoma is described as cells at least three times smaller than a lymphocyte with minimal cytoplasm. This type of carcinoma is commonly found in the lungs of smokers.

ABOUT US
The definitive source of meaningful and informative explanations of biological concepts.
Contact us: inquiries@biologydictionary.net
FOLLOW US
© 2023 Biology Dictionary. All Rights Reserved.