The common name “water buffalo” describes 5 different species in the genus Bubalus, native to Southeast Asia. Though the domestic water buffalo (Bubalus bubalas) may be one of the most commonly used domestic animals on the planet, its wild cousins are all on the verge of extinction. The wild water buffaloes include some of the world’s smallest cattle species: the lowland anoa, tamaraw, and the mountain anoa.

The term “water buffalo” is inappropriately used to describe the African buffalo – a.k.a. the Cape Buffalo. Cape buffalo are much meaner – killing many people every year – with massive horns extending all the way across the skull. Water buffalo have a fuzzy patch of hair between their horns, though their horns can still be massive. While Cape Buffalo move in large herds across parts of Africa, water buffalo are more adapted to the wet, tropical conditions of Southeast Asia.

Water buffalo spend quite of bit of time in the water whether they are swimming, traversing a river, or wallowing in the mud. Due to their docile nature, water buffalo have been domesticated for thousands of years – if not longer. The species Bubalus bubalus is the domesticated species. The wild water buffalo (Bubalus arnee) is the domestic water buffalo’s closest relative, though it is Endangered in the wild. With only a few thousand individuals left, this species faces an unpredictable future.

In captivity, female water buffaloes need nearly a full year for gestation – up to 330 days! Calves take up to 3 years to become sexually mature, but females can produce calves for 10 years or more. This makes it easy for farmers across many Asian countries to utilize the water buffalo to plow rice fields, carry heavy loads, and do other basic agricultural work.

Interesting Insights from the Water Buffalo!

The water buffalo is not just a peaceful bovid from Asia – it is also the perfect example of several important biological concepts.

From first appearances, the water buffalo seems in no way related to a humpback whale. Surprisingly, they are in the same order: Artiodactyla!

The Artiodactyla – also known as the “Even-Toed Ungulates” – includes all sorts of species with hooves from cattle to pigs to llamas. DNA evidence and vestigial morphological features in whales and dolphins show that these magnificent marine mammals have a common ancestor with water buffalo and other hooved creatures.

While the division occurred millions or hundreds of millions of years ago, early whales were terrestrial tetrapods. Like the water buffalo, they likely ventured into the water to carve out a niche. While water buffalo remain mostly above the water to enjoy the abundant vegetation at its edges, the cetaceans took to the ocean to chase the food resources in those ecosystems.

Wallowing – It’s not just for pigs!

A common image of the water buffalo shows the animals absolutely covered in mud. This behavior, known as “wallowing,” is displayed across a wide variety of animals including pigs, elephants, water buffalo, and many more. Typically, the behavior is thought to serve multiple purposes.

First, the mud serves as a physical barrier to protect the water buffalo from biting insects. Not only do biting insects carry many diseases, but they also cause uncomfortable itching and inflammation – even when your skin is as thick as a water buffalo’s!

Second, wet mud provides effective relief against the prevalent heat of the tropics. Water buffalo will roll in the mud, coating themselves effectively. As the water evaporates from the mud, it cools the remaining mud. Plus, it keeps the buffalo’s skin out of direct sunlight. This protects the buffalo from quite a bit of heat and UV damage.

The Evolution of Domestication

The fact that the wild water buffalo species are all Endangered is not surprising. The wild counterpart of the cow – known as the auroch – is now completely extinct globally. Cows, however, outnumber almost all wild animal species besides some insects. Many domesticated species have outlived their wild counterparts by being essential to certain cultures, which continue to reproduce them and protect them from harm. 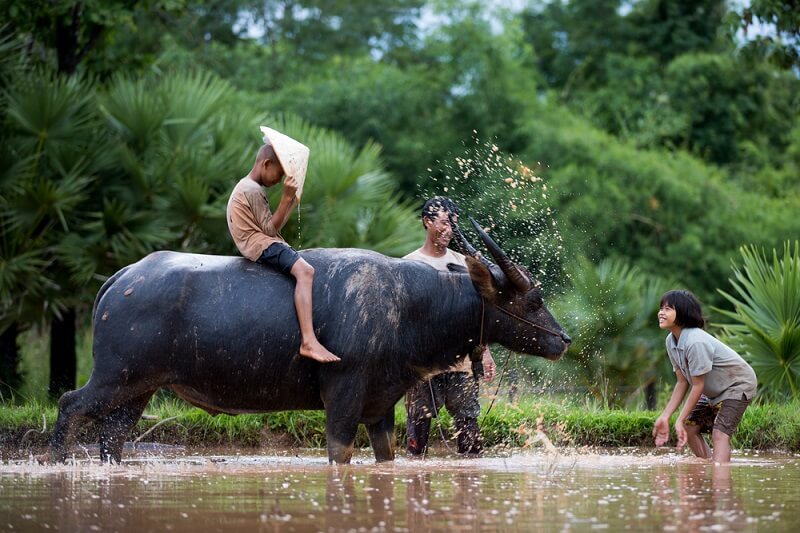 A domesticated Asian Water BuffaloThis isn’t true of all domestic animals, though. Domestic pigs are still highly related to their wild relatives – the feral pigs. Feral pigs are actually so prevalent in some parts of the United States and South America that they are treated as a pest species. The smaller size of species like the pig may have contributed to their survival into the human era – since humans wiped out the last auroch ages ago.