A stem cell, found in embryos (embryonic stem cell) and adults (somatic stem cell), is an immature, non-specialized cell that can differentiate into one or more specific functioning or regenerating cell types. This makes them of use in the treatment of degenerating diseases. A totipotent stem cell can become any cell type within the organism in which it is found; a pluripotent cell can become any of a wide range of cell types; a unipotent cell is restricted to one cell type. 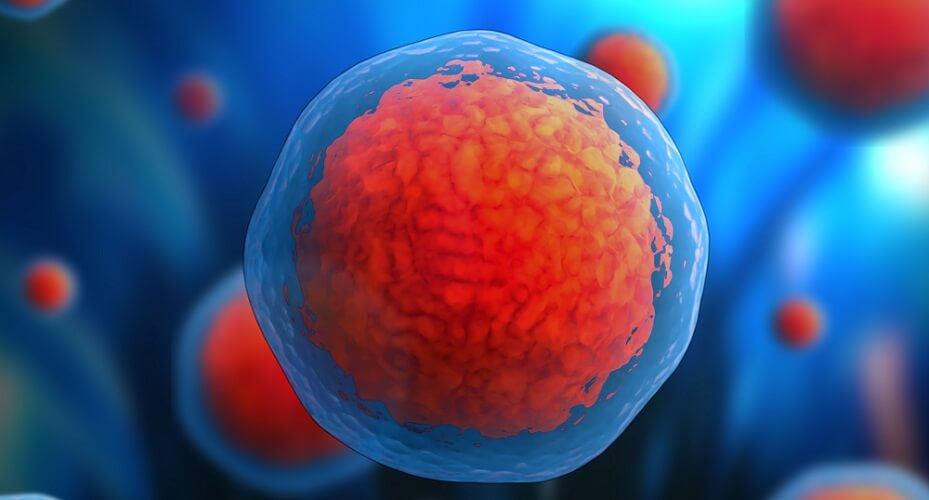 What is a Stem Cell?

A stem cell is an early form of cell that has the power to become a specialized cell. The first totipotent stem cell in mammals is the zygote – formed after the sperm has fertilized the egg. Every cell in the body is produced from this one cell.

While some textbooks say that cancer cells can be totipotent, this is not the case. A totipotent cell must be capable of developing into a complete organism and its supporting tissues through division. Some cancer cells can differentiate into other tissues, but they are not totipotent. Once a stem cell (SC) differentiates into a cell that is unable to become every cell type both in the organism and in the mother (as a placenta-forming cell), it is no longer totipotent but pluripotent.

SCs can be totipotent (the zygote and the zygote’s first stages of division into blastomeres), pluripotent, multipotent, oligopotent, or unipotent. It does not have any function except to produce cell forms that differ from its own structure. It’s sole role is to differentiate. How many cell types a stem cell can differentiate into is decided according to its potency level. The controlling mechanism of where and when this cell divides to become another cell type is found in the DNA.

Stem cell types are categorized according to potency level. The higher the stem cell potency level, the higher the range of differentiation. Somatic (adult) SCs are found in all adult and fetal tissues; they replace damaged cells within that tissue and are not totipotent.

The totipotent embryonic stem cell can differentiate into all cell types and also form placental tissue inside the mother. The first eight cells of a single fertilized egg (zygote) are totipotent. After the first round of cell division, the zygote becomes two identical blastomeres; in the second round, the two blastomeres become four blastomeres; in the third cycle of division, eight blastomeres are produced. Only up to this point is the SC totipotent. Should a single blastomere become separated from the group at this very early stage, identical twins are the result. If two blastomeres separate from the main group, identical triplets can develop.

As each totipotent cell division – called cleavage at this early stage – takes between twelve to twenty-four hours, totipotent embryonic stem cells can only be extracted between one and a half and three days after fertilization.

A pluripotent stem cell can differentiate into any adult cell type but not into placental tissue. Once eight blastomeres have formed, the first round of differentiation occurs to form an outer trophoblast and inner embryoblast. If an entire group of early differentiated pluripotent cells become separated at this point, it is unlikely an embryo will  develop. The trophoblast layer becomes the placenta and the embryoblast the embryo.

Embryoblast cells differentiate into any of the cells of the ectoderm, mesoderm, and endoderm of an embryo.

Most of the SCs used in research today are pluripotent embryonic cells. Ethical issues exist as, for large groups of the population, life begins at conception.

Induced pluripotent stem cells (iPSCs) are produced in the laboratory. These are somatic cells engineered to behave like embryonic ones. At present, their use is limited to research but they do mean fewer ethical issues. An adult can opt to donate his or her stem cells to international banks that may or may not match recipients from all over the globe.

A multipotent stem cell is an adult cell. This does not mean it is only found in adults – a fetus of approximately ten weeks is composed of multipotent adult SCs. Division produces one specialized daughter cell and one undifferentiated (stem) daughter cell. Examples of multipotent cells are:

It is possible to extract SCs from the umbilical cord during birth. Cord blood stem cells produce blood and mesenchymal cells. As umbilical stem cells have a higher level of potency than other multipotent SCs with fewer specific features, they produce a lower immune response when inserted into another organism of the same species.

The oligopotent stem cell only differentiates into a small group of related cell types. Lymphoid and myeloid stem cells, and corneal squamous epithelium SCs continuously renew the short-lived cells of their specific tissues.

The unipotent SC produces a single cell type to regenerate populations. Nearly all of the body’s cells are unipotent; the difference between a normal cell and a stem cell is this renewing ability. Unipotent progenitor cells allow the regeneration of cells with a short lifespan; examples of unipotent progenitors are muscle stem cells and epidermal stem cells.

When an SC is damaged and cannot differentiate, or when a differentiated stem cell does not divide (as with red blood cells), it becomes a nullipotent stem cell.

A good example is the process of skin burn repair. When skin is sunburned, the top (dead) layers of skin are damaged; new cells produced by unipotent basal skin stem cells eventually replace them. When a burn is deep and the basal cells are damaged, they can no longer divide or differentiate; they have been damaged to the extent that they are nullipotent.

Instead, the SCs of the underlying connective tissue differentiate and form a scar that is not skin. Skin grafts from healthy tissue placed onto a deep burn reduce scarring because they introduce undamaged basal SCs to unhealthy tissue.

Stem cell structure depends on the potency level. A totipotent cell has the structure of a zygote or a blastomere. A unipotent cell will more closely resemble the cell it differentiates into.

Most SCs are round with prominent nucleoli and a high nucleus to cytoplasm ratio (a large nucleus). They contain the same organelles as other cells – rough and smooth endoplasmic reticulum, Golgi apparatus, mitochondria, lysosomes, centrosomes, and centrioles.

In laboratories, embryonic SCs reproduce for indefinite periods and are referred to as immortal cells. The word ‘immortal’ has led many people to believe that these treatments can halt the aging process. This is not – at least not yet – true.

Cells produced in the laboratory are much less likely to be rejected by the bodies of non-related subjects. Stem cell treatment, therefore, is considered to be the future of organ transplant and tissue renewal therapies.

Stem cell research does not only concern the replacement or repair of damaged or aging tissue. It also includes looking into the signals that influence differentiation. External or environmental factors, cell signaling, and genetic control of stem cell specialization processes help us to understand how the body heals itself and regulates tissue renewal.

Even so, stem cell technologies are still in very early stages. We must first understand the exact processes that turn a totipotent cell into a liver cell, for example, before a stem cell therapy can be developed for liver damage. If this process is not exactly understood, any one of thousands of variables could cause SC injections to differentiate into undesired tissue types. Even the nutritional gel of a laboratory culture could affect which daughter cells are produced.

Low immunity in combination with human embryonic SC transplant has been known to lead to teratoma formation. One study showed how the human stem cell injected into immune-compromised mice caused human tissue teratoma growth. Naturally-formed teratomas first gave scientists the idea of the existence of pluripotent cells in the 1950s.

Stem cell therapy is still undergoing clinical trials in a small selection of diseases, not always with the best results. The treatment of blindness caused by macular degeneration with stem cell injection seems to help some visually-impaired patients but certainly not all. One’s own SCs are increasingly being used to ‘grow’ tissue that, once large enough, can be transplanted without rejection risk. Tracheal transplants, for example, have been performed using SC-generated implants.

In 2020, the Food and Drug Administration reported: “Currently, the only stem cell products that are FDA-approved for use in the United States consist of blood-forming stem cells…”.

Since then, this list has grown as more clinical research achieves results. Approved treatments now include:

Unfortunately, many clinics offer ‘approved’ stem cell treatments that are yet to be either proven or approved. Certainly, our lack of knowledge regarding when, how, and into what an SC differentiates should make us wait until more clinical studies and research have been performed.

Stem cell hair transplants are offered all over the world and often advertised as FDA-approved therapies – this is very far from the case. The risk of teratoma and even neoplasm (benign or malignant tumor) development when internal or external environments change the course of SC differentiation is a possibility that should not be ignored.

We still have decades of research before SC therapy gets anywhere near the initial, hopeful reports that filled newspapers at the beginning of this century. While studies must deal with a huge number of variables, it is expected that stem cell therapy will become a future first-line treatment for degenerative and immune disorders.