Purpose of the Biogeochemical Cycles

The Earth is a primarily a closed system because it’s mass stays virtually constant even though meteors and radiation from the sun can penetrate the atmosphere. In contrast, the biogeochemical cycles that take place in, on and around the planet are open systems because of the constant exchange of matter and energy that goes on between them. The energy from sunlight continually flows through ecosystems and is eventually released as heat. However, the biogeochemical cycles function to conserve and recycle the matter that is part of living organisms. There are several biogeochemical cycles on Earth including water, carbon, nitrogen, oxygen, phosphorous, sulfur and rock. A new cycle that is currently being studied by scientists is the mercury cycle. 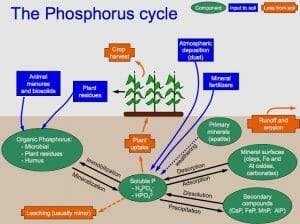 The image above shows Earths phosphorous cycle, one of several cycles on the planet that conserve and recycle the chemical substances that make up living things.