Pseudostratified columnar epithelia are tissues formed by a single layer of cells that give the appearance of being made from multiple layers, especially when seen in cross section. The nuclei of these epithelial cells are at different levels leading to the illusion of being stratified. However, this tissue is made of a single layer of cells and while the cells do not share a common apical surface, each cell is in contact with the basement membrane.

These tissues can be classified as ciliated or non-ciliated based on a cellular organelle involved with motility and sensory activity.

Nearly every eukaryotic cell has a single, primary cilium that plays a crucial role in developmental signaling pathways, and is involved in maintaining tissue homeostasis. In spite of the presence of a primary cilium, however, most cells are often called ‘non-ciliated’ to distinguish them from cells containing numerous motile cilia. These specialized structures are made of microtubules and can beat in a coordinated manner to move particles in a particular direction. These particles could be dust and pathogens in the respiratory tract, or could be an ovum that is propelled along the fallopian tube towards the uterus. 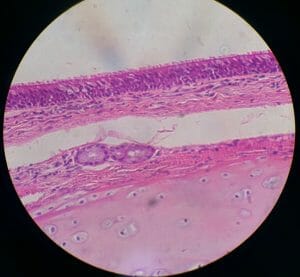 Even non-ciliated tissues of these epithelia contain tuft-like cytoplasmic projections called stereocilia. These structures, unlike motile cilia, are stiffer and made from actin microfilaments. They usually have an absorptive or mechanosensory function and are found in the male reproductive tract.

This tissue is found in regions where there is a need to secrete mucus to trap foreign bodies and sweep those particles away through the coordinated action of cilia. Additionally, they are also seen in locations where the epithelia have a combined secretory and absorptive function, such as in the vas deferens and epididymis. Such tissues usually contain stereocilia, which are cytoplasmic projections made of actin microfibrils.

Many of these tissues are made of goblet-shaped cells that secrete mucus and longer columnar cells that traverse the entire epithelium. Additionally, they also contain short basal cells whose apical surfaces do not reach the lumen. Basal cells can be precursors of either goblet cells or columnar cells.

The primary function of the respiratory passage is to bring air into close contact with blood flowing in capillaries, in order to allow the exchange of gases at the alveoli. Capillaries and alveoli are made of thin squamous epithelial cells in order to maximize gas diffusion. However, these delicate surfaces need to be protected from the abrasive effects of large dust particles, pollutants, pollen and a variety of corrosive agents and pathogens. The presence of pseudostratified columnar epithelium in the upper respiratory tract (composed of the nose, trachea and bronchi) protects the lungs from these irritants. Goblet cells of the epithelium secrete mucus to trap particles and prevent them from traveling further down respiratory passages. The coordinated action of cilia on longer columnar cells facing the lumen moves the mucus along with the particulate matter away from the lung. While smaller particles are removed as a part of the normal drainage of the nose, larger or heavier particulate loads are sneezed or coughed out.

Pseudostratified columnar epithelium is seen in the vas deferens and epididymis of the male reproductive tract. In these organs, cells contain stereocilia that behave like microvilli of the digestive tract. When sperm exit the testes and enter the epididymis, they are non-motile and therefore need to be propelled by large quantities of fluid. Stereocilia increase the surface area of the epithelial cells lining this tubular structure and allow the sperm to be concentrated by absorbing excess fluid before ejaculation.

1. Which of these is true about pseudostratified columnar epithelia?
A. Many of them contain numerous motile cilia
B. All the cells share an apical surface
C. Goblet cells are precursors of basal cells
D. Present in alveoli, fallopian tubes and ejaculatory ducts


Answer to Question #1
A is correct. Many of these epithelia contain motile cilia and all of them rest on the basement membrane. However, not every cell opens into the lumen or shares a common apical surface. Basal cells are considered to be the precursors of other cell types in the epithelium, rather than goblet cells. This epithelia are present in the fallopian tubes of the female reproductive tract, but are not present in alveoli or in the ejaculatory ducts of the male reproductive system.