Which Organism Would Be Classified As An Echinoderm

Echinoderms are invertebrate marine organisms that have a hard and spiny skin or covering. Examples of echinoderms are sea urchins, sea lilies, sea cucumbers, feather stars and sea stars (starfishes). There are over 6,500 species of echinoderms on Earth and about 13,000 species are described in the fossil record. Echinoderms evolved during the Cambrian geological period about 542-488 million years ago. Some long-extinct echinoderms were very large such as some species of sea lilies that had stems over 60 feet long. Most of the modern-day echinoderms are about four inches in length or diameter but there are some sea cucumbers that measure 6.5 feet long. 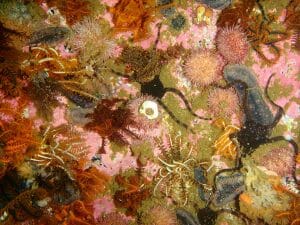 The image above shows various species of echinoderms living in Simon’s Bay near Capetown, South Africa.