Angiosperms are plants that live on land and reproduce using seeds in flowers and fruits.

Monocotyledons and dicotyledons, also known as monocots and dicots, respectively, are two types of angiosperm plants. The Italian physician and biologist Marcello Malpighi (1628 – 1694) was the first to use the term cotyledon (the Latin word meaning seed leaf) and John Ray (1627 – 1705), an English naturalist, was the first to notice that some plants have one cotyledon and others have two.

The cotyledon part of angiosperms is an embryonic leaf that is the first leaf (or leaves) to appear when a seed is germinating. Cotyledons perform photosynthesis but are not true leaves because they are present in the seed before it germinates. True leaves grow after the seed has germinated. Cotyledons may last only a few days after the seed germinates (ephemeral) or last up to a year (persistent).

Monocots and dicots differ in several ways which help in their identification and understanding of their origins. Paleobotanists, scientists who study the origins of plants, hypothesize that dicotyledons evolved first, and monocots branched off about 140 to 150 million years ago either from the fusion of the cotyledons or as a separate line. See Figures 1 and 2 for illustrations of the different physical features discussed below.

Monocot plants have one cotyledon. They also have long narrow leaves with parallel veins. Cutting a cross section from the stem of a monocot shows the vascular bundles scattered around in the plant tissue. The young plant stores food in the form of starches and other nutrients in a structure called the endosperm.

Another key characteristic for identifying monocots is by the number of flowers or flower parts which are arranged in groups of three. Also, the pollen grains of monocot plants have a single pore or furrow making them monosulcate (from the Greek word mono meaning ‘single’ or ‘one‘ and the Latin word sulcatus meaning ‘furrow’) and new roots originate from the stem of the plant. Some examples of monocots are lilies, orchids, corn, rice, wheat, barley, pineapple, sugar cane, bananas, palms, and grasses.

As opposed to monocots, dicots (also called eudicots) have two cotyledons during germination which supply the young plant with food and nutrients. The leaves of dicot plants come in a variety of shapes and sizes and the veins form branching patterns. Microscopic examination of dicot seeds shows a structure called the hilum which is a scar on the seed coat where the ovary was attached. This feature is not seen in monocots. Also, different from monocots is the roots of dicot plants originate from the radicle.

Another way dicots are distinct from monocots is their flowers and flower parts are arranged in multiples of four or five. In addition, the cross section of a dicot stem shows the vascular bundles arranged in a circular pattern. Unlike monocots, the pollen grains of dicot plants have three pores and are called trisulcate. Dicot plants can also have bark and secondary growth increases the diameter (girth) of the plant. Examples of dicots include potatoes, tomatoes, apples, pears, peaches, cauliflower, peppers, broccoli, and cabbage. 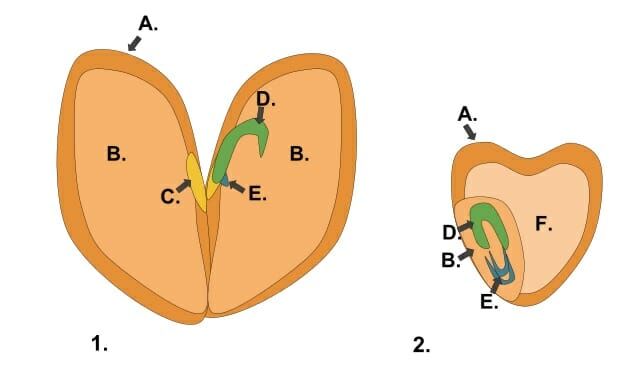 Figure 1: The image above shows a generalized dicot seed (1) and a generalized monocot seed (2). The structures in each type of seed are: A = seed coat, B = cotyledon, C = hilum, D = plumule, E = radicle, and F = endosperm. Note that the dicot seed lacks endosperm, and the monocot does not have the hilum that is present in the dicot seed.

Figure 2: The image above shows a cross section of the stem of a dicot plant (left) and monocot (right). Note how the vascular bundles are scattered in the monocot stem and arranged in a circular pattern in the dicot stem.