The maxilla bone or maxillary bone is a fused (paired) bone that provides part or all of the bony structure of the eye sockets, the nasal passage, the hard palate, the left and right maxillary sinuses, and the upper tooth sockets. It is the second-largest facial bone. Without the maxilla, we can neither eat properly nor speak clearly. The maxilla bone is composed of a main body with four processes or projections. It borders with nine facial and cranial bones. 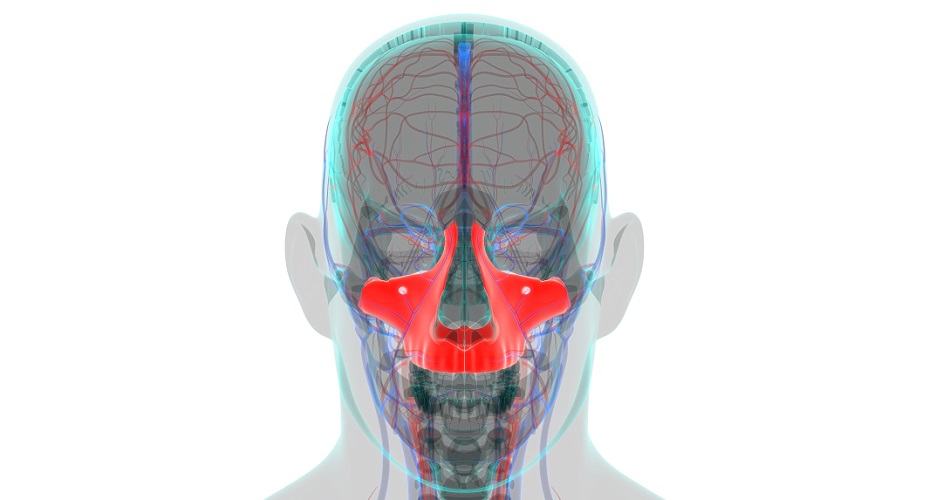 Maxilla bone location is in the mid-face. It runs from just below the glabella – the part of the forehead that sits between the eyes – along either side of the nose, and joins below the nasal cavity to form the upper jaw.

The maxilla bone extends approximately one-third of the way along either cheek. If you press into the skin just under one of your cheekbones, you can feel the maxilla bone as it moves down to form the upper jaw.

The maxillary bone is an irregular bone composed of two fused halves. The point of fusion is at the vertical line (the intermaxillary suture) that runs from the nasal septum to between the two middle front teeth. Some textbooks call this an articulation, others do not. This means that sometimes the maxilla bones (and mandible bones) are counted as two bones; sometimes as one. As both the upper and lower jaw bones fuse at around the age of two years, either is correct.

Maxilla bone anatomy is better understood when we first take a quick look at facial development in the fetus.

Over time, the right and left mandibular processes meet and fuse to form the lower jaw. The upper jaw and cheekbones are the result of maxillary and mandibular prominence fusion. Fusion requires the developing maxilla to spread into the cheeks and up towards the eyes.

When this development is interrupted by genetic mutations or environmental factors, a cleft lip and/or cleft palate (orofacial cleft) might be the result.

A cleft lip only affects the soft tissue of the upper lip. A cleft palate means that the hard palate – formed by the fusion of the fetal maxillary prominences – is incomplete and remains open. There is little to no separation between the oral and nasal cavities.

Around one in every 1,700 babies is born with a cleft palate. Both cleft lips and cleft palates can be surgically treated with huge success.

The maxilla bone has five surfaces and these border nine other bones.

These borders and bones are:

An extremely important area of bone runs under the gums of the upper teeth. This is the alveolar process of the maxilla bone that provides sockets (dental alveoli) for the teeth. It has no border with another facial bone.

Smoking, sugary foods, and bad dental hygiene can significantly lower bone density in this area, making the teeth loosen and eventually fall out. Even second-hand smoking poses a real risk to dental health.

The alveolar process of the maxilla has not been correctly marked in the below image; the process is the entire ridge of thicker bone that follows the row of upper teeth. The arrows indicating the alveolar process are actually pointing to multiple dental alveoli. Note the almost hairline suture near the back of the hard palate – this shows the articulation between the maxilla and thin horizontal plates of the two palatine bones.

Anterior View of the Maxillary Bone

To either side of the nasal cavity there are two much larger holes. These are the infraorbital foramina that create openings for the left and right branches of the infraorbital artery, vein, and nerve to pass through. The purely sensory infraorbital nerve innervates the skin and mucous membranes of the central zone of the face.

Posterior View of the Maxillary Bone

The posterior surface is a little more complex. The bone borders lie deeper and are hard to visualize when looking at your face in the mirror, for example. A view of the maxilla bone from the side shows where the lacrimal (or lachrymal) bones border the posterior surface of the maxillary bone. This border leads to a concave groove that runs down the nasal cavity, providing a channel for tears.

Close to the lacrimal bone articulation are further borders with the orbital projections of the ethmoid and palatine bones. These projections help to form the complicated structure of the eye sockets.

On the inside of each frontal process are articulation points with the paired nasal bones that sit between them.

Inferior View of the Maxilla Bone

When the mouth is opened wide, the first three-quarters of the hard palate indicate the position of the palatine process of the maxilla bone.

Even more difficult to see in the average labeled maxilla bone diagram is its articulation with the inferior nasal concha. The three nasal conchae or turbinates increase the amount of air that can be held within the nasal cavity, allowing larger volumes of inspired air to be slightly warmed and moistened before entering the lungs.

The lowest of the three turbinates – the inferior nasal concha – articulates with the inferior surface of the maxillary bone.

Body of the Maxilla Bone

The largest section of the maxilla bone is its body. This body houses the left and right maxillary sinus. The maxillary sinus is a paranasal sinus that opens into the middle of the nasal cavity and only reaches its full size when the permanent teeth emerge. The photograph below shows the large space of the sinus on the posterior (back) surface.

Part of the maxilla body helps to form the infratemporal fossa – an extremely complex area containing various blood vessels, muscles, and nerves. The maxillary body ends where any of the four processes begins.

Processes of the Maxilla Bone

Other facial and cranial bones that articulate with the same bones may also have similarly-named processes. For example, both the zygomatic and maxilla bones have frontal processes as both of them articulate with the frontal bone; a single alveolar process is found in the bones of both the upper and lower jaw. This is why naming the bone of origin is important.

The four maxilla bone processes are:

What Type of Bone is the Maxilla Bone?

The answer to the question, “What type of bone is the maxilla bone?” is simple – it is an irregular facial bone. You can refer to the maxilla bone as a single unit or as two paired but fused bones.

Malo and maxillary bone fractures (malo refers to the cheekbone/zygomatic bone) are relatively common. They are usually caused by falls, motor vehicle accidents, and violent assaults.

Up to 25% of facial fractures involve the maxillary bone. It is centrally located and especially assaults tend to concentrate on this part of the face. Maxillary bone fractures with displacement can be life-threatening.

Mid-facial fractures are usually categorized as one of three Le Fort injury types. Le Fort type I fractures are the result of a downward force against the upper teeth and the least serious of this type of maxilla bone fracture. Tooth loosening or tooth loss is common in Le Fort type I injuries.

Le Fort type II fractures are more centralized and affect the area around the middle of the nasal cavity, often causing trauma to multiple facial bones.

Le Fort type III fractures, quite frighteningly referred to as cranial-facial separation,  are the most serious. These slightly higher fractures are commonly caused by blunt force trauma to the nasal bridge. Such force not only damages the frontal process(es) of the maxilla bone but also smaller and more delicate bones such as the orbital bones, sphenoid bone, and ethmoid bone.

It is not uncommon for cerebrospinal fluid to leak through the nose or ears with a Le Fort type III fracture. Other symptoms of Le Fort type III injuries – apart from pain and changes in vision and hearing – are raccoon eyes (Battle’s sign), nose bleeds, and a flattened face.

The more serious the maxilla bone fracture, the higher the possibility that the majority of facial bones are damaged. Airway obstructions caused by facial bone displacement are medical emergencies. Even so, modern surgery can reduce scarring to a minimum in many cases.