The English naturalist and scientist Charles Darwin was the first to describe directional selection as a form of natural selection in his foundational 1859 work On the Origin of Species by Means of Natural Selection, or the Preservation of Favored Races in the Struggle for Life.
The directional selection theory says that an extreme phenotype (characteristics or traits) is favored over other phenotypes and this causes the allele frequency (how often the variant of a gene shows up in a population) to shift over time in favor of the extreme phenotype. In other words, if a particular trait is favorable, it will be expressed at the most beneficial frequency in the population.

Stabilizing selection can be thought of as “middle-of-the-road” selection, meaning a non-extreme trait is favored instead of one of the two extreme traits. An example of this is plant height. In a population of plants, those that are short may not get enough sunlight, but those that are tall may be subjected to wind damage. This results in an increase in the number of medium-height plants and a decrease in very tall and very short plants. Because most traits do not change drastically over time, stabilizing selection is considered to be the most common mechanism for natural selection.

Other examples of stabilizing selection are the birth weight of humans and the number of eggs a bird lays (clutch size). The birth weight of human babies stays within a certain range because babies that have a very low birth weight have less chance of survival and those with a very high birth weight can cause complications during delivery which threaten the life of the mother and the child. The clutch size of bird species is limited to a certain number of eggs. There must be enough eggs so that the clutch can survive predation and/or disease, but not so large that there are too many chicks for the parent(s) to feed.

A more classic example of disruptive selection is the beak size of finches on the Galapagos Islands that was studied by Darwin. Because the majority of seeds found on some of the islands were either large or small, finches with large and small beaks (no medium-sized beaks) were favored on those islands. 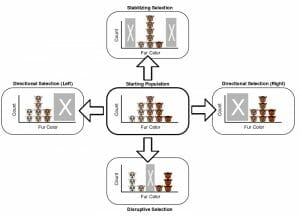 The image above shows the three patterns of natural selection using an allele that determines fur color.