The F+ (donor) cell produces the pilus, which is a structure that projects out of the cell and begins contact with an F– (recipient) cell.

The pilus enables direct contact between the donor and the recipient cells.

Because the F-plasmid consists of a double-stranded DNA molecule forming a circular structure, i.e., it is attached on both ends, an enzyme (relaxase, or relaxosome when it forms a complex with other proteins) nicks one of the two DNA strands of the F-plasmid and this strand (also called T-strand) is transferred to the recipient cell.

The four steps mentioned above can be seen in this figure: 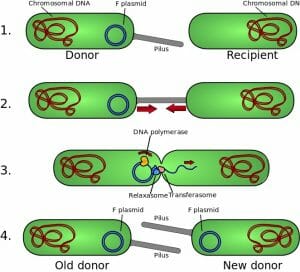 In order to avoid transferring the F-plasmid to an F+ cell, the F-plasmid usually contains information that allows the donor cell to detect (and avoid) cells that already have one. In addition, the F-plasmid contains two main loci (tra and trb), an origin of replication (OriV) and an origin of transfer (OriT). The tra locus contains the genetic information to enable the donor cell to be attached to a recipient cell: the genes in the tra locus code for proteins to form the pili (pilin gene) in order to start the cell-cell contact, and other proteins to get attached to the F– cell and to start the transfer of the F-plasmid. The trb locus contains DNA that codes for other proteins, such as some that are involved in creating a channel through which the DNA is transferred from the F+ to the F– cell. The OriV is the site at which replication of the DNA occurs and the OriT is the site at which the enzyme relaxase (or the relaxosome protein complex) nicks the DNA strand of the F-plasmid (see Step 3 above).

The advantages of bacterial conjugation make this method of gene transfer a widely used technique in bioengineering. Some of the advantages include the ability to transfer relatively large sequences of DNA and not harming the host’s cellular envelope. Furthermore, conjugation has been achieved in laboratories not only between bacteria, but also between bacteria and types of cells such as plant cells, mammalian cells and yeast.

1. What genetic information (DNA) does an F-plasmid contain?
A. Chromosomal DNA.
B. Non-chromosomal DNA with regulatory genes.
C. DNA that codes for proteins to produce pili.
D. B and C.
E. All of the above.