Algae is a term used to describe a large, diverse group of eukaryotic, photosynthetic organisms. Algae can be unicellular, live in colonies, or even be multicellular. The wide variety algae makes them hard to classify. Algae span both terrestrial and marine environments, growing almost anywhere there is water and sunlight. Algae, like plants, are photosynthetic organisms. One group of algae, the green algae, is even classified with the plants because of how similar the organisms are.

Algae, as a group, produce a vast majority of the oxygen on Earth. They exist in almost every part of the ocean receiving sunlight, in enormous numbers. Many other species survive filtering algae out of the water, and many more are dependent upon the oxygen they produce. Algae require a variety of nutrients in addition to sunlight. When conditions are perfect and no nutrients are limited, algae can experience exponential growth. This can lead to algal blooms, in which massive amounts of algae bloom at the same time. The algae rapidly become too thick, killing many of the algae in the middle of the bloom. Bacteria and other organisms move in to feed on the dead algae, depleting the water of oxygen. This creates an oxygen “dead zone” in the ocean, which can be deadly to many species. Further, the toxins produced by some algae can be harmful or deadly to wildlife and humans.

The “typical” (if there is one) algae consists of a eukaryotic cell, resembling that of a plant, with a membrane bound nucleus, chloroplasts, and mitochondria. The chloroplasts photosynthesize sugars, which are broken down by the mitochondria. While many algae species are found as free-living unicellular organism, others take the form of colonies or multicellular organism. Below is a Euglena, a free-living unicellular algae. This algae has a thick pellicle, which spirals around the cell for protection. Other algae may have cell walls, or other protective coverings.

Other algae live in more complex arrangements. The colony of algae below rely on each other, but still function as individuals for the most part. As you can see, the algae on the outer edge of the colony are specialized for defense, carrying large spines. This helps the whole colony survive, without each algae having to produce spikes. 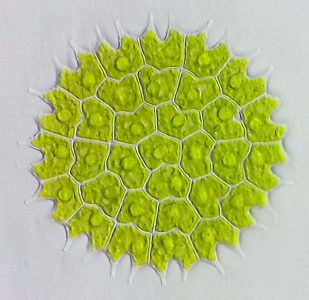 The largest algae, however, exist as multicellular organisms. These algae, like the kelp seen below, can grow hundreds of feet tall, exploiting the entire column of light in the ocean. Unlike most terrestrial plants, these plants are nonvascular, and do not have a special way to transport water. Thus, they must stay in the marine environment. They do have a number of adaptations which help them deal with the harsh conditions of the ocean, such as floating organs which carry them toward the light and specialized anchors which help root them to the ocean floor. 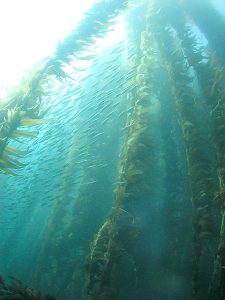 However, there are also a class of organisms known as cyanobacteria (blue-green algae), which photosynthesize but are only prokaryotes. While they contain all the necessary biochemical pathways to photosynthesize, they do not have membrane-bound organelles or a nucleus. Thus, they are bacteria. Scientist believe that these smallest and simplest of algae represents the chloroplast, before the process of endosymbiosis took place. In other words, scientists believe that cyanobacteria and chloroplasts are related, and that chloroplasts and mitochondria are simply smaller organisms which have coevolved with their larger cohosts.

Where Algae are Found

Everywhere. Algae are found virtually all over the planet. The marine environment is saturated with them. The freshwater environment is also teeming with algae, as seen in any green pond or lake in the summertime. You might be surprised, but there are even algae which have colonized the terrestrial environment. Certain species of algae are found exclusively on snow-capped mountains, thousands of feet above sea level. Here, there is just enough sunlight, water, and nutrients for the algae to thrive.

While the majority of algae are found within the portion of the water column containing sunlight, scientists have also found organisms genetically similar to algae which do not photosynthesize. Thus, while photosynthesis was likely the shared feature of evolving algae, advanced derived forms have sometimes lost the need for it. These organisms can thrive where there is no sunlight, furthering the range of algae as a group.

Algae impact and affect humans on a number of levels. First and foremost, algae represent the most potent source of oxygen in the atmosphere. If the algae suddenly died off, the world would quickly suffocate from lack of oxygen. While this is unlikely, humans should be aware of their impacts on algae. Algae, like grass and plants in the terrestrial world, is the base of the food-chain. Without algae, the rest of the food chain would collapse. Even humans eat algae, in almost every culture and region near an ocean.

And, it should be noted how easily humans can disrupt the algal life cycle. For example, it has been shown that agricultural runoff is one of the main causes of algal blooms near populated areas. This unintended spillover of nutrients into the ocean causes the algae to grow rapidly, leading to the oxygen deprived conditions described above. Worse yet, some algae release toxins which are harmful to humans. Think staying out of the water will keep you safe? Think again. Wind can blow the toxins through the air, affecting any organisms too close to the oceanfront.