In chemistry, “adhesion” refers to the tendency of some substances to cling to other substances. It comes from the root words “ad” for “other” and “hesion” for “to stick to.” Adhesion is usually caused by interactions between the molecules of the two substances.

The most important adhesive substance on Earth is water.

This is because the nucleus of water’s oxygen atom attracts the molecule’s electrons more strongly than the nuclei of its hydrogen atoms. As a result, the oxygen atom is slightly negatively charged, while the hydrogens are slightly positively charged. 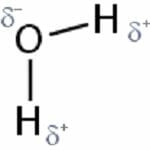 In the image above, the “δ” symbol indicates a partial charge due to unequal electron sharing.

This allows water to interact strongly with any other charged or polar substances. Because atoms of opposite charges are actively attracted to each other, different parts of water molecules are attracted to both positive and negative ions and molecules.

On a large scale, this means that water will stick to many substances.

Water molecules also stick to each other for the same reason, because all water molecules are polar. This property, called “cohesion,” works with adhesion to make some life functions possible.

You have seen capillary action if you have ever dipped the edge of a paper towel or toilet paper square into a puddle of water.

You’ll notice that the water races up the paper towel quite fast, eventually soaking the whole thing even if you have only dipped a corner into the liquid!

That is the adhesion of water in action: water molecules stick to charged molecules within the paper.

To make them absorbent, paper towels and toilet paper are specially made with narrow channels that encourage water to “climb” up them until they run out of channels to fill.

This is the same mechanism that allows trees to draw water and minerals up from the soil to nurture their leaves. Trees are made of the same materials as paper (or rather, paper is made from trees), and trees have tiny channels inside of them that suck up water in just the same way as a paper towel.

If water were not polar and did not have the property of adhesion, trees as we know them could not exist!

The tendency of water molecules to stick to other molecules also allows water to dissolve substances that are important to life, such as ions, DNA, and many proteins.

This is necessary for life because molecules that have been dissolved in water or another polar solvent interact with each other more readily. So, the polarity of water also makes chemical reactions that are important to life possible!

1. Adhesion happens when a molecule is ionic.
A. True
B. False


Answer to Question #1
False. Ions form ionic bonds, where one atom gives an electron to another, and the two then stick together because of their opposite charges.

Polar substances can often become ionized if a hydrogen atom gives its electron completely to the oxygen. However, they more commonly exist with covalent bonds.

2. The molecules making up trees and paper towels are nonpolar.
A. True
B. False


Answer to Question #2
False. In order to stick to water, the molecules in trees – and paper towels – must be polar.

Examples of a nonpolar substance, which repels water instead of attracting it, include vegetable oil and a plastic raincoat.

3. In addition to being important for capillary action, water’s adhesive properties help cells to function.
A. True
B. False


Answer to Question #3
True! Water molecules’ ability to stick to other molecules is very important for facilitating the functions of life. We couldn’t exist without adhesion.