Zooplankton (pictured below) are a type of heterotrophic plankton that range from microscopic organisms to large species, such as jellyfish. Zooplankton are found within large bodies of water, including oceans and freshwater systems. Zooplankton are drifting ecologically important organisms that are an integral component of the food chain. 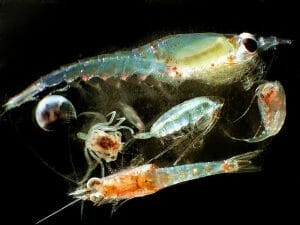 The most important types of zooplankton include the radiolarians, foraminiferans, and dinoflagellates, cnidarians, crustaceans, chordates, and molluscs.

Radiolarians are small protozoan species that are characterized by the production of mineral skeletons made of silica. The remains of these organisms can be found at the bottom of oceans, comprising a large part of the sediment.

Foraminiferans are a type of amoeboid protest that exhibit an external shell and ectoplasm used to obtain food. While the shell is typically comprised of calcium carbonate, the shells of some species contain other minerals. These zooplankton can be found in the sediment or drifting about the upper surface waters.

Dinoflagellates are considered a mixotrophic species, meaning than they can be both photosynthetic or ingest other species. This type of zooplankton is extremely small and represent a significant portion of marine eukaryotes and are important for the health of coral reefs.

Cnidarians are marine species that are characterized by specialized cells called “cnidocytes”, which are used to capture their prey. They have bodies consisting of a jelly-like substance called mesoglea, a mouth, and tentacles that contain the cnidocytes (e.g., jellyfish).

Crustaceans are a type of arthropod that consists of crabs, krill, shrimp, and barnacles. Crustaceans range in terms of size, and comprise a significant part of the food chain. Krill and copepods in particular, are important zooplankton species.

Chordates are animals that possess anotochord, norsal nerve chord, endostyle, post-anal tail, and pharyngeal slits. This is a highly diverse family that includes sea stars, scalps, and many other species.

Molluscs are a highly diverse group of organisms, which include squid species as well as sea slugs, and sea snails. Molluscs comprise a large component of all marine life.

What do Zooplankton Eat?

Zooplankton consume a variety of bacterioplankton, phytoplankton, and even other zooplankton species. Since such organisms reside at the surface of bodies of water, zooplankton are also typically found in the upper waters.

Krill (shown below) are a type of crustacean found populating oceans throughout the world. Krill consume phytoplankton and other zooplankton species. Krill are consumed by larger marine animals, thus making them a significant contributor to the lower food chain in marine environments. As such, krill are extremely abundant and provide a primary dietary component of several large marine species, such as whales and seals. Krill reside at the surface at night and drift down into deeper waters during the day. 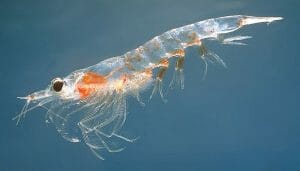 Jellyfish (shown below) are a type of cnidarian as described above, and are found residing throughout marine environments; some reside near the surface, while some species can be found in deeper waters. Jellyfish are most commonly found near coastal regions throughout the world. 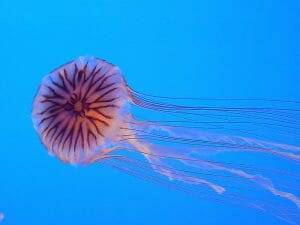 Conger eels (pictured below) are large organisms found in both Europe and North American coastal waters. They typically reside close to the sediment and prey on crustaceans and small fish. 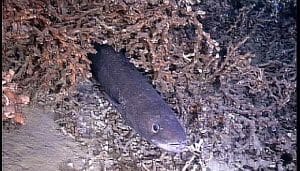 Segmented worms include leeches (shown below) and other forms of ringed worms. Marine species are most frequently found in coral reefs and tidal zones, borrowing into the sediment. This type of zooplankton is important as its borrowing ability oxygenates the sediment, thereby facilitating the growth of aerobic bacterial species and other animals. 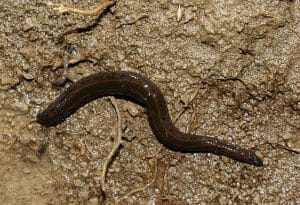 1. Which of the following is NOT an example of a type of zooplankton?
A. Krill
B. Jellyfish
C. Leech
D. Squid
E. None of the above


Answer to Question #1
E is correct. All of these organisms are zooplankton, forming the lower constituants of the food chain in aquatic environments.

2. Which of the following is NOT food for zooplankton?
A. Other zooplankton species.
B. Phytoplankton
C. Aquatic mammals
D. None of the above. Zooplankton are photosynthesizing species and do not require additional food.


Answer to Question #2
C is correct. Zooplankton are at the lower end of the food chain and primarily feed on phytoplankton and smaller species of zooplankton. Aquatic mammals are typically large predators in aquatic environments and consume zooplankton species.