The trapezius muscle is a large, paired, flat, superficial muscle of the upper back and neck composed of three sets of fibers. Its job is to move the shoulder blades by way of elevation, rotation, and adduction according to the controlling fiber type. It is innervated by the cranial accessory nerve (CN XI) for motor functions; sensory innervation is provided by the spinal nerves at cervical vertebrae three and four. It plays an important role in posture, side bending, turning the head, lifting and dropping the shoulders, and rotating the arm internally. 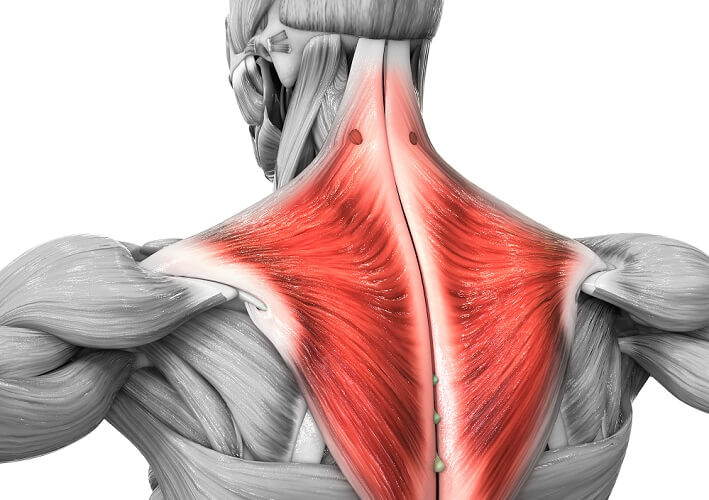 What is the Trapezius Muscle?

The trapezius muscle is so named because of its near trapezoid (diamond) shape. It can be felt just under the skin and is divided into the descending, ascending, and middle parts. As a skeletal muscle, it depends on nerve impulses that cross the neuromuscular junction of the connecting nerve and the membrane that covers groups of muscle fibers.

Motor (movement) functions are supplied by the spinal root of the accessory nerve. For pain and proprioception (sense of position), sensory functions are provided by cervical nerves C3 and C4.

The trapezius muscle does not work alone. It is one of a group of superficial back muscles that help us to extend and flex the upper back. These are:

At the neck, the descending trapezius and cervical erector spinae muscles extend the head. As a group, these are referred to as the cervical extensor muscles.

The descending or superior part of the trapezius muscle refers to the direction of the muscle fibers that run from the back of the skull to the inner surface of the collar bone, on the side closest to the humerus. Blood supply arrives via the occipital artery.

Upper trapezius muscle action elevates the pectoral girdle composed of the clavicles and scapulae. These are the collar bones and shoulder blades, respectively. When carrying a bag of heavy shopping in one hand, it is these fibers that keep the shoulders level. If the right or left descending fibers contract, the head flexes to the contracting side. When we contract both sides, the neck extends against gravity.

The middle fibers of the trapezius muscle function by way of horizontal fibers that run from the spinous processes of the cervical vertebrae and the first three thoracic vertebrae. They make their way to the middle of the shoulder blade acromion and the superior crest of the scapular spine (see below image). Blood is provided by the superficial cervical artery.

The spine of the scapula is a ridge that runs diagonally on the outer edge of the shoulder blades, providing an insertion point for middle trapezius muscle fibers. The acromion is a bony protuberance of the scapula that articulates with the clavicle, forming the acromioclavicular joint.

These fibers adduct or retract the left and right shoulder blades, bringing them closer to each other by pulling them toward the spine. The middle trapezius muscles also help raise the arms above shoulder level and are part of the muscle group that rotates the upper thorax.

The ascending fibers run upwards from thoracic vertebrae four to twelve and insert into the thick, white, fibrous tissue under the scapular spine – the aponeurosis. As these fibers are found at the lowest part of the trapezius muscle, they are also called the inferior trapezius. Blood is supplied via the dorsal scapular artery.

With the origin lower than the insertion point, these muscle fibers pull the shoulders down.

Working together, the descending and ascending trapezius rotate the shoulder blades upward, specifically at the glenoid fossa. This shallow joint articulates with the head of the humerus bone.

Where is the Trapezius Muscle Located?

Trapezius muscle location can be felt through the skin. By imagining a diamond shape, we can picture it starting at the back of the neck, widening at the shoulder, then narrowing as it runs toward the lower ribs.

The upper trapezius fibers provide the top of the diamond at the neck. The horizontal middle trapezius muscle stretches from the spine to the joint between the shoulder blade and humerus. The bottom of the diamond is composed of the upward-running fibers of the ascending trapezius.

Trapezius muscle strain is common, especially as many of us sit at desks or keyboards for long periods, often with an incorrect posture. Many people complain of trapezius muscle knots that do not always respond to massage and anti-inflammatory drugs. When the problem is posture-related, however, these knots, pains, and strains return at regular intervals. Trapezius knots are actually inflamed trigger points that can be painful if pressure is applied. Pain can also occur at the neck and even the jaw as this is where the communicating nerves run.

Another activity that is linked to trapezius muscle strain is taking or making mobile phone calls and gripping the phone between shoulder and ear. This will cause unilateral pain, usually on the opposite side, as the contralateral muscle stretches. Muscle strain can be acute or chronic. Chronic trapezius muscle pain is more commonly the result of neurodegenerative disorders that affect the sensory nerves, trauma, or incorrect posture over time.

Trapezius muscle traumas are soft-tissue injuries. If less than five percent of muscle fibers are damaged, this is known as a Grade 1 injury. If the muscle completely tears into two pieces, it is a Grade 3 injury. As the upper back, shoulders, and neck are crucial for daily activity, it can take up to three weeks to recover from a Grade 1 injury and months for more serious trauma.

A trapezius muscle spasm is another sign that the muscle has been injured. Spasms are more often the result of tension, where the muscles of the back contract for long periods.

The most common cause of a pulled trapezius muscle is posture; the muscle covers several important joints – including those of the vertebrae. When one or more of these joints are badly positioned, either through anatomical anomalies or bad habits, this causes inflammation and unnecessary contraction, particularly in the upper trapezius muscle. Furthermore, inflammation adds pressure to the sensory and motor nerves. Sitting for hours looking at a screen or out a vehicle window causes us to hunch the shoulders. As the shoulder becomes rounded, the head is pushed forward. If we remained in this position, we would not be able to see ahead of us but only down. The neck, therefore, elevates the head and this puts additional pressure on the place where the spinal accessory nerve exits the skull. Stimulated, it causes contraction in the trapezius muscle; spasms, pain, and strain are the result.

While trapezius muscle exercises are always recommended to keep the muscle supple, correcting the posture is even more important. Other irregularities such as when one leg is shorter than the other also cause the trapezius muscle to compensate and make the shoulders level. Corrective shoes or insoles can alleviate this type of chronic pain. Scoliosis, kyphosis, and lordosis – misalignments of the spine – can be treated surgically or with supportive girdles.