The Path of Nitrogen through its Biogeochemical Cycle

The Earth’s nitrogen cycle captures and recycles nitrogen in a variety of forms such as ammonia, nitrate, nitrite, nitrous oxide and nitrogen gas. Throughout the process, bacteria and plants play a role in moving nitrogen through the cycle. Human activity adds nitrogen to the environment through the combustion of fossil fuels and the use of artificial fertilizers in the agriculture industry.

Although nitrogen makes up about 78% of the Earth’s atmosphere, moving it into the living world can be a challenge. Plants and phytoplankton are not able to use nitrogen directly from the atmosphere. They rely on microorganisms in the soil that “fix” nitrogen by taking it from the atmosphere and combining it with hydrogen to make ammonia. The bacteria then convert the ammonia into other organic compounds that are taken up by plants and phytoplankton in the next step. Some of these bacteria live in the nodules on the roots of plants like alfalfa and peas. The bacteria trade some of the nitrogen they make with the plants in exchange for carbohydrates.

Plants are the major players in the assimilation phase of the nitrogen cycle. They absorb nitrogen from the soil by taking up ionic forms of nitrite, nitrate or ammonium through their root hairs. Plants are one of the main foods for terrestrial animals and are their main source of nitrogen. Animals assimilate the nitrogen from the food they eat and use it to make molecules that are essential for life such as amino acids.

This process comes into play when a plant or animal dies or when an animal expels waste. Initially, the nitrogen is bound to other molecules in an organic form. The molecules are broken down by bacteria and fungi and the nitrogen is released as ammonium.

Nitrification converts the ammonium created in the previous step into nitrate ions. This is accomplished primarily by bacteria from genera including Nitrosomonas and Nitrobacter. 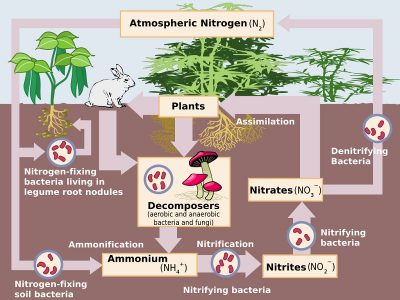 The image above shows an overview of the nitrogen cycle. Oceans have a similar nitrogen cycle that is carried out by different genera of bacteria and plants.