The temporal bone or os temporale is a paired, irregular bone and the thickest in the human body, located at the sides and base of the skull. It provides space for important cranial arteries, veins, and nerves. The os temporale also provides attachment points for numerous muscles. It joins or articulates with the occipital, parietal, sphenoid, and zygomatic bones and the mandible. 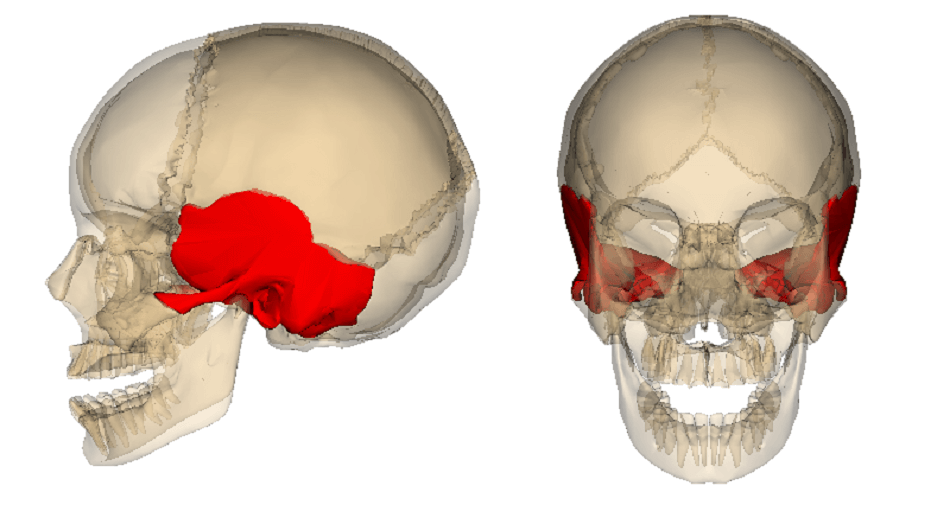 Temporal bone anatomy is complicated, as the structure of this paired bone is very irregular. Because of its shape, it is split into five different parts:

Squamous Part of the Temporal Bone

The inner surface of the temporal squama is convex.

At the bottom of the squama, the zygomatic process of the temporal bone juts towards the cheekbone (zygoma), forming the posterior portion of the zygomatic arch.

This zygomatic process is part of the squamous portion of the left and right temporal bones. Where the process meets the zygomatic bone is one of the os temporale’s articulation points.

Where the zygomatic process exits, two ridges are visible. These are the posterior and anterior roots.

The posterior root follows a path towards the external auditory meatus. The anterior root, much thicker and shorter, ends in the articular tubercle. The articular tubercle is a small, bony projection that articulates with the condylar process of the mandible. This is part of the temporomandibular joint that opens the lower jaw.

Petrous Part of the Temporal Bone

The petrous apex articulates with the greater wing of the sphenoid bone and with the bottom of the occipital bone. It helps to form a channel for the internal carotid artery (carotid canal) as well as part of a triangular hole known as the foramen lacerum. This is a gap between the associated bones that provides a gateway for important arteries, veins, and nerves.

The petrous base joins to the squamous part of the temporal bone as well as to the mastoid part.

The petrous part has three surfaces and three angles:

All surfaces are relatively complex.

The anterior angle articulates with part of the sphenoid bone called the spinous process and with the temporal squama.

The anterior surface helps to form the middle cranial fossa that houses the temporal lobes of the brain. It also features the arcuate eminence which used to be thought was a good indication of where the superior semicircular canal can be found. This is no longer the case.

The anterior surface of the petrous part of the temporal bone borders the middle ear.

The posterior angle features a sulcus or indentation for the inferior petrosal sinus – a dural venous sinus that drains blood and cerebrospinal fluid from the brain and returns these fluids to the venous circulation.

The posterior surface forms part of the posterior cranial fossa that contains the brainstem and cerebellum. In its middle is the internal auditory canal – a channel for nerves related to our senses of hearing and balance.

The superior angle provides an attachment point for the tentorium cerebelli – a fold of the dura (membranous brain coverings).

Another sinus (the superior petrosal sinus – the white line depicted by number 8 in the image) and the trigeminal nerve are also channeled through the superior angle.

The inferior surface of the petrous part of the temporal bone is on the outside of the skull base and features many foramina. One of these is the stylomastoid foramen that forms an attachment point for the levator veli palatine muscles that move the soft palate. The cartilage of the Eustachian tube also attaches to the inferior surface.

Mastoid Part of the Temporal Bone

At the back of the temporal bone is the mastoid part. It contains special cells called mastoid air cells. These sometimes fill with fluid that can become infected. An infection here is called mastoiditis.

The formation of air cells in bone is known as pneumatization and this phenomenon occurs throughout the temporal bone. Pneumatization stops around puberty.

It is not known exactly why we have these cells but their proximity to the ear has produced many theories. These include ear-pressure regulation and shock absorbing qualities.

Tympanic Part of the Temporal Bone

The styloid process of the temporal bone, sometimes categorized as part of the squamous temporal bone, is a pointed structure essential for speech and swallowing. This point provides an attachment point for muscles that control the tongue and larynx:

With Eagle’s syndrome, this process can grow so long it develops its own articulations. It then appears as a finger-like projection on a temporal bone CT or x-ray.

Causes of an elongated styloid process are usually unknown, although people with chronic renal failure are more likely to develop one.

Elongation causes pain as the long spike (or spikes) push into cranial nerves V, VII, IX, and X. Symptoms include dizziness and fainting if the bone prevents proper blood flow to and from the brain.

This report talks of an elongated stylus of 6.97 cm that was treated with steroids and local anesthetic after causing pain in the throat and neck. Usually, an elongated styloid process of the temporal bone that causes these symptoms is surgically removed. The person in question did not want to undergo a surgical procedure.

Knowing that the temporal bone is close to so many important structures and plays a role in speech, swallowing, hearing, balance, fluid drainage, nerve pathways, and protection of the brain, it is obvious that a fracture in this region can cause serious damage.

As the thickest bone of the skull, it is said that only forces above 6000 Newtons cause fractures to this area. Even so, a fall from a horse can cause a temporal bone fracture, as with this seriously-injured young woman after being thrown from an untamed horse.

Other common causes are motor vehicle accidents, assault, and falls from a height.

Symptoms of a temporal bone fracture include:

Battle’s sign is the result of several types of skull fracture. This sign encompasses the combination of bruising behind the ear, around the eyes, and/or the upper neck as well as cerebrospinal fluid draining from the ears or nose.