Proteins are constructed through an intricate action blueprinted and carried out by the nucleic acids deoxyribonucleic acid (DNA) and ribonucleic acid (RNA). The process is known as protein biosynthesis and involves the construction of protein chains from individual amino acids in a particular sequence.

Amino acids are either produced by the body or ingested in the diet. They are categorised into three different groups: essential, nonessential and conditionally essential. However, these categories were created in the first half of the nineteenth century and, although still used to distinguish the various protein building blocks, are not particularly well named. Current studies tend to look at each amino acid in terms of function, and nutritional source and value.

The eleven nonessential amino acids are primarily produced in the body. In humans, these are alanine, asparagine, aspartic acid, cysteine, glutamic acid, glutamine, glycine, ornithine, proline, serine and tyrosine. Some of these depend upon the availability of essential amino acids in the diet which act as precursors to non-essential forms.

Conditionally essential amino acids are grouped to define a potential lack in the cellular environment either due to an unhealthy diet or a physical state in which increased amounts of these usually nonessential amino acids are necessary, such as during childhood, pregnancy, and illness. This group includes arginine, cysteine, glutamine, tyrosine, glycine, ornithine, proline, and serine; arginine is essential for the young, but no longer necessary after the development period has ended. It is therefore considered ‘conditionally’ essential.

Selenocysteine and pyrrolysine are not usually included in the current list of twenty amino acids. In fact, there are twenty-two amino acids and not twenty as previously thought. This is because not only are these two amino acids found in very small quantities; they are not used to synthesize proteins.  Instead they function as codon stop signals.

All amino acids have a central alpha carbon atom upon which is bound a carboxyl group (COOH), a hydrogen atom (H), an amine group (NH2), and a functional and variable radical side chain which defines which amino acid it is. The most basic form of amino acid is glycine (C2H5NO2), which has a side chain consisting of a single hydrogen atom, as pictured below.

Alternatively, tryptophan (C11H12N2O2) is the largest amino acid. This complex molecule can be seen below. 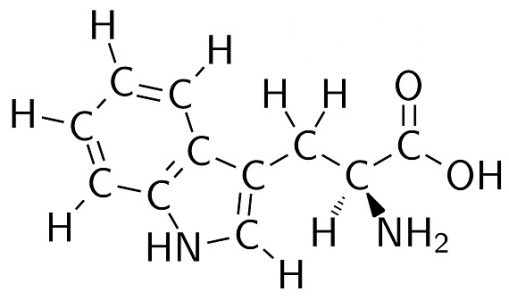 Life would not be possible without proteins. They play essential roles in every living organism. Every antibody, enzyme and chemical messenger is created from protein. Protein is also necessary to provide, maintain and repair anatomical framework and structure, from a cellular level right up to that of the musculoskeletal system. They act as binding molecules and carrier molecules allowing for transport and storage of atoms and molecules throughout the body. They break down larger compounds into waste products, are responsible for the ingredients of reproduction, regulate homeostasis and metabolism, maintain pH values and fluid balance, and provide energy. Each protein is the combination of a specific sequence of amino acids, built according to the blueprint contained within the DNA. This code must be extracted, decoded and transported to cellular protein manufacturing units called ribosomes by various forms of ribonucleic acid.

The Formation of Proteins via Nucleic Acids – Gene Expression

The process of gene expression is a combination of transcription and translation, where a sequence of DNA code provides the information necessary to construct a new protein molecule from available cellular materials.

Transcription consists of three phases. During initiation, RNA polymerase (an enzyme) attaches to a ‘promotor’ sequence which indicates the start of the section of gene that is to be copied. Bound to the promotor, RNA polymerase severs the weak hydrogen bonds between each nitrogenous base pair and essentially unzips the double DNA strand. Elongation is the next step, where RNA nucleotides supply appropriate nitrogenous base pairings. For example, if the DNA sequence consists of the bases adenine, thymine, guanine, adenine, cytosine, thymine (TGACT), the RNA copy of this sequence will implement adenine, cytosine, uracil, guanine, adenine (ACUGA). The final phase of transcription is termination which, as the name suggests, is the end of the process. Guided by a terminator sequence on the DNA, the strand of newly manufactured RNA detaches from the DNA.

The resulting strand of copied DNA is called messenger RNA. This strand has a distinctive cap and tail end and is recognised by pore complexes in the nucleus, which allow it to leave the nucleus and enter the cytoplasm.

Transfer RNA (tRNA) is primarily located within the cell cytoplasm. In the presence of mRNA, tRNA binds to a singular free amino acid. Which amino acid this is, is regulated by the sequence of the three nitrogenous bases of each tRNA, otherwise known as the codon. Ribosome subunits now bind to the start of the mRNA strand. Ribosomes provide the framework upon which tRNA codons match each set of three nitrogenous bases on the mRNA. This creates a sequenced chain of amino acids – a protein – created to a specific recipe originally provided by DNA. A stop codon indicates the end of the translation process, where a genetic code is translated into a protein.