Producers and Decomposers of Freshwater

Plankton species like protozoans and diatoms as well as phytoplankton such as green algae and blue-green algae (cyanobacteria) are the smallest producers in the freshwater ecosystem. However, because of their vast numbers, together they are responsible for the majority of the photosynthesis. Larger producers in freshwater ecosystems are water lilies, water lettuce, water hyacinths, watermeal, duckweed, bulrushes and cattails. Freshwater producers use sunlight and carbon dioxide to perform photosynthesis and serve as a food source for consumers in the ecosystem. 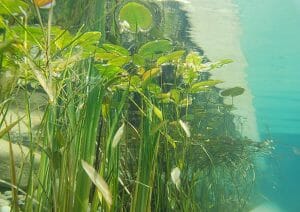 The image above shows some types of pond plants from an underwater perspective.

Most freshwater decomposers like bacteria and fungi are on the bottom of rivers and lakes. This is where the remains of dead organisms and plants are found along with dead plant matter that enters the water from terrestrial sources. Decomposers continually replenish the nutrients in the soil by breaking down dead material through the use of biochemical and chemical reactions.