Phagocytosis, or “cell eating”, is the process by which a cell engulfs a particle and digests it. The word phagocytosis comes from the Greek phago-, meaning “devouring”, and -cyte, meaning “cell”. Cells in the immune systems of organisms use phagocytosis to devour bodily intruders such as bacteria, and they also engulf and get rid of cell debris. Some single-celled organisms like amoebas use phagocytosis in order to eat and acquire nutrients.

The cell that will perform phagocytosis is activated. This can be a phagocyte, which is a cell in the immune system that performs phagocytosis, or an organism such as an amoeba, which behaves in a similar way to phagocytes when it carries out phagocytosis. In the case of immune cells, activation occurs when the cells are near bacterial cells or parts of bacterial cells. Receptors on the surface of the cells bind to these molecules and cause the cells to respond.

In the immune system, chemotaxis may occur. Chemotaxis is the movement of phagocytes toward a concentration of molecules. Immune cells pick up chemical signals and migrate toward invading bacteria or damaged cells.

The cell attaches to the particle that it will ingest. Attachment is necessary for ingestion to occur. Some bacteria can resist attachment, making it harder for them to be taken into the cell and destroyed.

A lysosome fuses with the phagosome and the particle is digested. Lysosomes are vesicles that contain hydrolytic enzymes that break down molecules. A phagosome fused with a lysosome is called a phagolysosome.

Cellular waste, such as broken down molecules that the cell cannot reuse, is discharged from the cell by the process of exocytosis. Exocytosis is the opposite of endocytosis; it is when cellular waste products travel in vesicles to the surface of the cell membrane and are released, thereby exiting the cell. 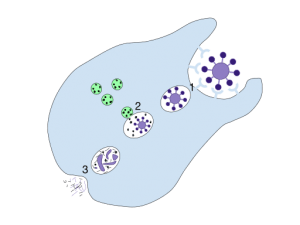 This diagram shows the process of phagocytosis. A cell ingests a particle, breaks it down with the enzymes in lysosomes, and expels waste products through exocytosis.

Phagocytes are found throughout the human body as white blood cells in the blood. One liter of blood contains approximately six billion of them! Many different types of white blood cells are phagocytes, including macrophages, neutrophils, dendritic cells, and mast cells. White blood cells are known as “professional” phagocytes because their role in the body is to find and engulf invading bacteria. “Non-professional” phagocytes include other types of cells like epithelial cells, endothelial cells, and fibroblasts. These cells sometimes perform phagocytosis, but it is not their primary function.

As mentioned earlier in the article, amoebae perform phagocytosis in order to consume food particles. Amoebae engulf particles by surrounding them with pseudopods, which are temporary armlike projections of the cell that are filled with cytoplasm. Ciliates are another type of organisms that use phagocytosis to eat. Ciliates are protozoans that are found in water, and they eat bacteria and algae. Both amoebae and ciliates are protists, organisms that have eukaryotic cells but are not animals, plants, or fungi.

1. What is the function of phagocytosis?
A. To destroy invading bacteria
B. To get rid of cell debris
C. To uptake nutrients
D. All of the above


Answer to Question #2
A is correct. Endocytosis includes phagocytosis, pinocytosis, and receptor-mediated endocytosis, among other processes. Choice B specifically describes pinocytosis only, choice C is exocytosis, and choice D is digestion in lysosomes (which is a step in endocytosis).

3. Which of the following does NOT enter a cell through phagocytosis?
A. Bacteria
B. Oxygen
C. Damaged cells or parts of cells
D. Algae


Answer to Question #3
B is correct. Oxygen is a small molecule and it can easily diffuse through the cell membrane, which is important because animal cells need oxygen to survive and carry out cell processes. Larger molecules or even whole organisms like bacteria and algae are taken into a cell via phagocytosis. They are too large to simply pass through the cell membrane unaided.