The Marine Ecosystem is the Largest Ecosystem on Earth

The Marine Ecosystem has the Greatest Biodiversity on Earth

Almost half of the known species on Earth live in marine ecosystems and scientists suspect there may be another 1 million yet to be discovered. Roughly 700,000 to 1 million species live in the oceans.

Phytoplankton are tiny plants that live in the upper areas of the ocean and use photosynthesis to make their food. They are so abundant in the oceans that all together they account for about 50% of the photosynthetic activity and over 50% of the oxygen production on the planet.

Mangrove forests are found on tropical and subtropical marine coastlines and tidal areas. They contain small trees and shrubs tolerant of salt water. The root systems of the forests form tangled webs of habitat where many species of fish, invertebrates, seabirds, and waterfowl live, reproduce, and mature.

The oceans absorb most of the heat radiated from the sun especially around the equator. The ocean currents distribute the heat around the planet, but most of the heat is lost due to evaporation. The constantly evaporating ocean waters create rain, thunderstorms, and hurricanes by increasing the temperature and humidity of the air. Because the trade winds carry these storms over vast distances, most of the precipitation that falls on land originates in the oceans. 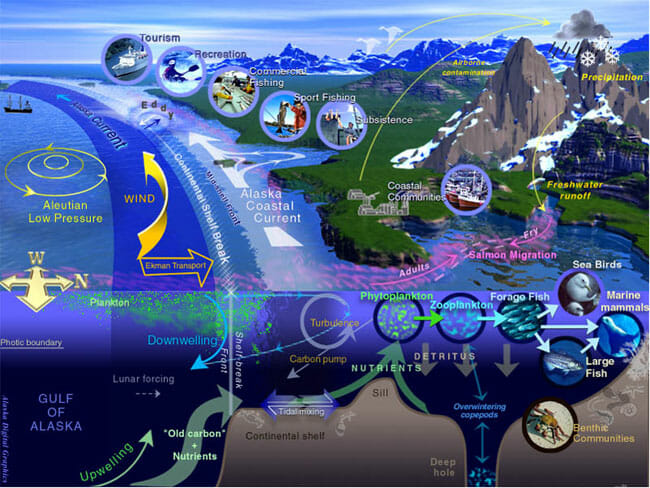 The image above shows the typical characteristics of the marine ecosystem in the Gulf of Alaska.