Humoral immunity is also called antibody-mediated immunity. This physiological mechanism protects the body from pathogens and foreign substances in extracellular fluids and is part of both the innate and adaptive immune systems. It involves a humoral immune response that occurs in two stages: primary and secondary. The primary phase is set into motion upon the body’s first contact with an antigen (surface protein found on pathogen membranes); the secondary phase describes the immune-system reaction to subsequent contact with the same antigen. 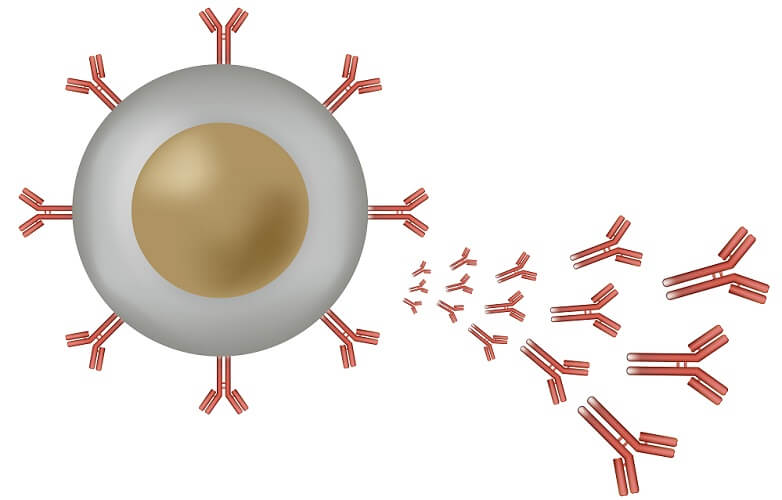 What is Humoral Immunity?

Only extracellular space is associated with humoral immunity; this response is mediated by antibodies secreted by differentiated plasma cells. To understand the phases of the humoral immune response it is important to know more about its various components.

Pathogens are microorganisms that are not part of the normal body flora. While all of us play host to countless bacteria, many of these help rather than harm us. The word pathogen comes from the Greek word pathos which means suffering or disease.

When a microorganism is harmful, it is known as a pathogen. If the normal body flora becomes imbalanced, certain non-harmful microorganisms may multiply and begin to cause unpleasant symptoms (opportunistic flora). For example, everyone’s gut contains E.Coli bacteria. Only when these populations exceed normal levels do we suffer from diarrhea. Pathogens are foreign organisms that do not form part of the normal flora.

Pathogens can be recognized by immune cells. This is because all microorganisms have specific proteins on their membrane surfaces. Sometimes, textbooks refer to pathogens as antigens. This is not correct. The aforementioned surface proteins are distinguishing features and it is these surface proteins that we call antigens.

An antigen has active areas able to bind to white blood cells and antibody receptors. This area is the epitope or antigenic determinant.

There are three classes of antigen:

Sometimes, smaller molecules enter the body that do not present complete antigens. If you touch poison ivy, your skin absorbs haptens in the form of a chemical called urushiol. Urushiol is not a harmful molecule. If the immune system did not recognize it, there would be no effect. To create an immune response, the hapten must bind to skin proteins like keratin. Only as a combined molecule do they cause an ill effect and only in this state can immune cells see them as hazardous. A hapten needs a carrier protein to make its antigen complete.

Lymphoid organs are components of our extracellular system and it is here that lymph (a fluid made of the same products as extracellular or interstitial fluid) is produced. Our lymphoid system is a drainage network that also transports lipids and cells of the immune system. We have three classes of lymphoid organs:

The primary organs allow certain white blood cells – lymphocytes – to form and mature. Both T and B cells are produced in the red bone marrow. B cells mature here; T cells move through the lymph to the thymus gland and mature there. We will learn more about these immune cells later on.

An antigen-presenting cell is part of the cell-mediated immune response. This is not the same as the humoral immune response and their differences will be discussed further on.

However, recent research has shown that these two processes are intricately linked. While cytotoxic T cells (lymphocytes) can destroy infected cells (cell-mediated), helper T cells activate antibodies. In addition, suppressor T cells slow down or stop the immune response when necessary or if the danger has passed.

An antigen-presenting cell (APC) eats pathogens via phagocytosis. When broken down, the antigens of the pathogen are also reduced into smaller pieces. These fragments are bound to major histocompatibility complex class II (MHC II) molecules inside the cell and moved to the surface of the APC membrane. These are presented to helper T cells.

MHC class I molecules tell a helper T cell that the antigens are non-pathogenic and so avoid an immune response. Unfortunately, many cancerous cells are marked by the immune system as harmless using this mechanism.

The above image shows how different immune complexes interact. CD refers to cluster of differentiation – in this case two numbered signaling chains on the T helper cell membrane that associate both with the same cell’s receptor  (TCR) and with the MHC II protein of the presenting cell. The yellow rod marked as Ag is the bound antigen.

An antigen is recognized by an area at its tip called the epitope; without the antigen-presenting cell, an immune cell response will not be activated. Once a T helper cell has come into contact with an MHC II signal on the APC surface, it can activate a B cell.

T lymphocytes are part of the innate and acquired immune systems. Cytotoxic (killer) T cells directly destroy infected cells. Helper T cells, however, bridge the gap between both systems. When presented (by an APC) with an antigen bound to an MHC Class II molecule, it activates and releases cytokines (primarily interleukins) to attract B cells.

Helper T cells are themselves recognized by MHC II via a CD surface protein. T cells can also differentiate into memory T cells that, upon a second infection involving the same antigen, produce both cytotoxic and helper T cells.

B cells have three functions: as antigen-presenting cells (see above), to secrete chemical messaging molecules called cytokines (the colored dots), and to produced antibodies as part of the humoral immune response.

When still in the bone marrow, B cells develop membrane receptors – B-cell receptors or BCRs. These receptors will later recognize the antigens presented by T helper cells. This can only occur after a T helper cell has released cytokines; the cytokines activate the B cell.

Upon activation, a B cell divides. It will either produce two plasma cells or two inactivated memory cells.

Plasma cells or effector B cells produce antibodies at a relatively slow rate. They manufacture one of five types of antibodies and move around the body attracted by cytokines. When they arrive at the source of a cytokine distress signal, they secrete these antibodies.

Memory cells remain inactive and live much longer than plasma cells. A second attack from the same pathogen activates the memory cell; this subsequent attack occurs more rapidly than that of the first pathogen exposure.

Antibodies or immunoglobulins are the weapons of the humoral immune response and this response is defined by them.

They work by attaching to a pathogen and breaking it down, stopping the microorganism from releasing toxins, or clumping the pathogens together. Clumping (aggregation) makes it easier for them to be destroyed by way of cell-mediated immunity (phagocytosis).

We have five types of immunoglobulin:

Each type is associated with one of the above methods of pathogen destruction. IgM antibodies are part of the initial humoral response to a first infection. IgG is the most common antibody but is not highly antigen-specific.

Antibodies have a known structure and are Y-like in form. The two arms of the Y feature antigen-binding sites. These sites differ in construction according to antibody type; part of this area is called the hypervariable region (HV) that binds to the epitope of a specific antigen.

Now we know the various components of the humoral immune system, it is easy to picture the two phases.

In the primary phase of the humoral immune response that takes several days to take effect, the following occurs:

In the secondary humoral immune response, the body has previously been in contact with a specific pathogen and memory B cells produced during the initial attack are still present. Memory B cells can live for weeks, months, or even years.

The steps of the secondary phase only involve thymus-dependent antibodies (memory B cells):

The difference between humoral and cell-mediated immunity is not always clearly defined. This is because the function of the T helper cell straddles the boundaries.

The most obvious difference is antibody production. Cell-mediated immune responses do not produce antibodies. Instead, they use APC-activated T helper cells to secrete cytokines and these attract white blood cells. White blood cells (the cell-mediated part of this response) digest foreign particles via phagocytosis. Phagocytes are non-specific – they attack and digest any foreign particle they come across.

Of equal importance are cytotoxic T cells. These are also referred to as killer T cells and induce cell death in damaged or infected cells.

There are many similarities between humoral versus cell-mediated immunity, too. Both are part of both the innate and adaptive immune systems; both require antigen-presenting cells, lymphocytes, and cytokines to function.

In this final section, we look at an old and a new humoral immunity example.

Evidence of smallpox infection has been found in the 3,000 year-old mummy of Pharaoh Ramses V; the virus nearly wiped out indigenous populations in the Americas and Australia. It was finally eradicated across the globe at the end of 1979. To date, only two viruses have been completely eradicated through vaccination.

It was Edward Jenner who first published his observations regarding the low infection rate of milkmaids during a time when smallpox was rife. Doctors were already using variolation – the deliberate infecting of healthy individuals with pus from dead or dying smallpox victims – to try to innoculate people. They did not understand the secondary phase of the humoral immune response but understood how a weak level infection could give rise to a stronger level of future protection.

When inoculated with smallpox pus, milkmaids rarely showed a response. Jenner removed pus from the sores caused by cowpox – a different but related infection – from a milkmaid called Sarah Nelmes and injected this pus into the arm of the young son of his gardener. The boy never contracted smallpox, even when in contact with the disease.

Moving on to the modern humoral immunity example, we can look at the recent race toward a vaccine against SARS-CoV-2. We do not know enough about the virus to justify injecting weakened or dead forms into the body. The Oxford-AstraZeneca vaccine uses a DNA template based upon a weakened chimpanzee cold virus known to generate a strong immune response. This virus was genetically engineered to not reproduce itself.

A COVID-19 surface membrane protein called the spike protein was then attached to the chimpanzee virus. This made the cold virus a viral vector. When injected, the vector virus enters the cell and injects its engineered DNA into the cell nucleus, as do all viruses. However, this virus will not replicate itself.

However, the gene for the production of the spike protein can. Through protein synthesis, the foreign but harmless protein is manufactured inside the cell and released. This initiates the primary humoral response – APCs come into contact with the unknown protein and start the process that leads to antibody production.

The other vaccine type, developed by both Pfizer-BioNTech and Moderna, is based upon messenger RNA and contains the genetic sequence for the intracellular production of the COVID spike protein. Remember that this protein is just a surface membrane antigen and not a working virus.

The intracellular manufacture of the foreign antigen also initiates our humoral immune response. As messenger RNA is the result of DNA transcription, this form of antibody protein synthesis does not begin within the cell nucleus – this vaccine almost certainly does not cause minute changes to our DNA. Instead, the mRNA vaccine skips the transcription phase of protein synthesis and begins at the translation phase.