How Do Echinoderms Eat

There are a variety of feeding methods used by echinoderms like sea urchins, crinoids, sea stars, sea cucumbers and brittle stars in the ocean. Feather stars (crinoids) and brittle stars use passive filter feeding to capture food particles that float by in the water, while sea stars are hunters that pursue and capture their prey, bending their arms to push the food into their mouths. A few sea star species are passive feeders like crinoids and brittle stars. Sea urchins tend to be grazers that scrape algae off rocks and other surfaces. Sea cucumbers are known as deposit feeders because they eat small food particles that settle on the ocean floor. 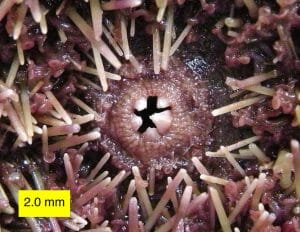 The image above shows the mouth of the purple sea urchin Stronglocentrotus purpuratus.