Gap junctions are a type of cell junction in which adjacent cells are connected through protein channels. These channels connect the cytoplasm of each cell and allow molecules, ions, and electrical signals to pass between them. Gap junctions are found in between the vast majority of cells within the body because they are found between all cells that are directly touching other cells. Exceptions include cells that move around and do not usually come into close contact with other cells, such as sperm cells and red blood cells. Gap junctions are only found in animal cells; plant cells are connected by channels called plasmodesmata instead.

The main function of gap junctions is to connect cells together so that molecules may pass from one cell to the other. This allows for cell-to-cell communication, and makes it so that molecules can directly enter neighboring cells without having to go through the extracellular fluid surrounding the cells. Gap junctions are especially important during embryonic development, a time when neighboring cells must communicate with each other in order for them to develop in the right place at the right time. If gap junctions are blocked, embryos cannot develop normally.

Gap junctions make cells chemically or electrically coupled. This means that the cells are linked together and can transfer molecules to each other for use in reactions. Electrical coupling occurs in the heart, where cells receive the signal to contract the heart muscle at the same time through gap junctions. It also occurs in neurons, which can be connected to each other by electrical synapses in addition to the well-known chemical synapses that neurotransmitters are released from.

When a cell starts to die from disease or injury, it sends out signals through its gap junctions. These signals can cause nearby cells to die even if they are not diseased or injured. This is called the “bystander effect”, since the nearby cells are innocent bystanders that become victims. However, sometimes groups of adjacent cells need to die during development, so gap junctions facilitate this process. In addition, cells can also send therapeutic compounds to each other through gap junctions, and gap junctions are being researched as a method of therapeutic drug delivery. 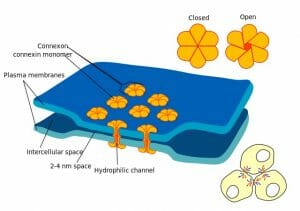 This figure depicts channels at a gap junction.

Plant cells do not have gap junctions, but they do have plasmodesmata, which are channels that connect the cytoplasm of two adjacent plant cells. Plasmodesmata are structured differently than gap junctions due to plant cells having thick cell walls, their function is essentially the same. Plant cells can regulate the passage of small molecules and communicate with each other through their plasmodesmata.

2. What is the “bystander effect” in relation to gap junctions?
A. Molecules can enter neighboring cells without passing through extracellular fluid.
B. Cells next to a cell that is undergoing cell death can also die.
C. Cells can transmit therapeutic compounds to one another.
D. Gap junctions are only found in cells that are located next to other cells.


Answer to Question #2
B is correct. All of these choices are true about gap junctions, but only choice B describes the bystander effect. When a diseased or injured cell dies, it sends out signals that reach adjacent cells, which can cause them to also die. This is called the bystander effect because the cells are like innocent bystanders that become victims at the scene of a crime.

3. Which is NOT a function of gap junctions?
A. Forming a barrier
B. Allowing molecules to pass between cells
C. Electrically coupling cells
D. Ensuring correct embryonic development


Answer to Question #3
A is correct. Gap junctions do not form a barrier; they have the opposite function. They connect adjacent cells together and have important roles in cell communication and embryonic development. Choice A describes tight junctions.