How Climate Change Affects the Biodiversity of Marine Ecosystems

The biodiversity found in marine ecosystems is greater than in any other on Earth. Climate change causes wide-ranging effects including changes to water pH, nutrients, oxygen content, and stratification. These changes affect the biodiversity of communities, particularly in the polar regions of the planet.

Climate change is affecting the Earth’s northern and southern poles at a faster rate than anywhere else. The health of polar marine ecosystems is intimately tied to seawater temperature and the amount of sea ice present. These two factors influence the growth and reproduction of organisms, food sources, and the biogeochemical cycles of the region.

An example of the effects of climate change on the biodiversity in the polar regions is the reduced population of Adélie penguins. The loss of sea ice in the area along with reduced amounts of krill and an increase in late spring snowfalls has resulted in an 80% reduction in the Adélie penguin population in the region of Palmer Station in Antarctica. At the same time, species such as the Gentoo penguin and fur seals are migrating to this area to take advantage of the ecological niche that has opened up due to the decline in the penguin population.

About 25% of all marine species are associated with coral reefs. These reefs are very sensitive to changes in the pH and temperature of ocean waters. For example, an increase in water temperature as little as 1°C causes coral bleaching, the loss of color due to the death of the zooxanthellae that live within the coral tissues. But, bleaching does not affect only the color of coral. Moderately bleached coral has lower growth and reproduction rates and severe bleaching kills them. Because of this high sensitivity, reef stress is an early warning sign of changes in water acidification and temperature. Besides climate change, coral reefs also suffer from pollution, overfishing, invasive species, and nutrient overenrichment.

Many organisms that live in coral reefs are negatively impacted when reefs are damaged by increased temperature and water acidification. Coral provides food, structure, mating/spawning areas, and cover for these creatures. With the loss of reefs, some species can migrate to rocky areas to live but others specialized to live in the reefs will die off. Scientists believe if conditions continue to deteriorate, there will be reduced diversity of fish and invertebrate species in these areas. 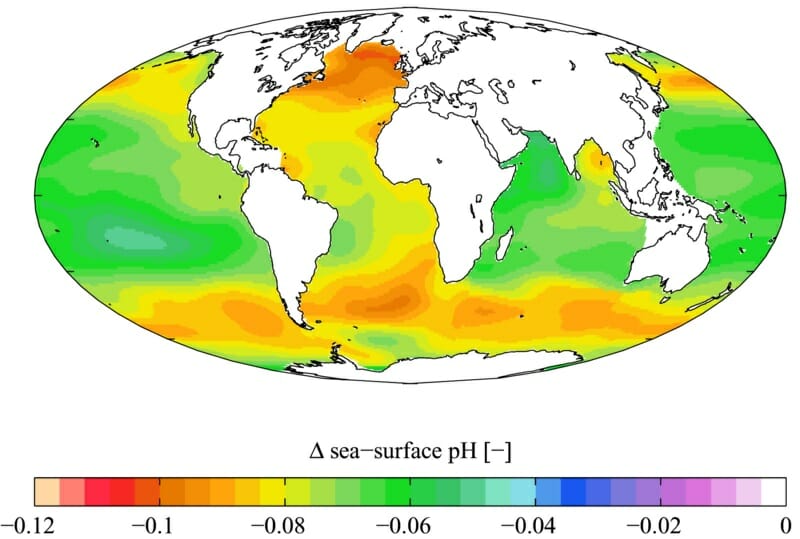 The image above shows the change (delta) in the surface water pH of the world’s oceans. The acidification of the oceans is one of the key indicators of climate change.