Cardiac muscle exists only within the heart of animals. It is a specialized form of muscle evolved to continuously and repeatedly contract, providing circulation of blood throughout the body. The heart is a relatively simple organ. Through all the twists and turns and various chambers, there are only three layers. The outer layer, known as the epicardium or visceral pericardium, surround the cardiac muscle on the exterior. This helps protect it from contact with other organs. The parietal pericardium attaches to this outer layer creates a fluid-filled layer which helps lubricate the heart. The inner layer, or endocardium, separates the muscle from the blood it is pumping within the chambers of the heart. In between these two sheets lies the cardiac muscle. Cardiac muscle is sometimes referred to as myocardium. This can be seen in the image below. 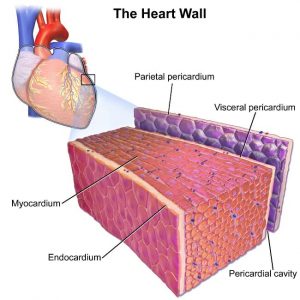 When we look a bit closer at cardiac muscle, we can see that it is arranged in sheets of cells, which are connected to each other in a lattice-work fashion. Where two cells meet a specialized junction called an intercalated disc locks the two cells into place. While this region looks like a dark disc under the microscope, it is actually the interlocking of hundreds of finger-like projections from each cell. These projections have small holes in them, gap junctions, which can pass the impulse to contract to connected cells. Interlaced between and around these cells are nerves and blood vessels, which carry signals and oxygen to the cardiac muscle.

At the microscopic level, cardiac muscle is organized much like skeletal muscle. Both muscle tissues are striated, meaning they show dark and light bands when viewed under a microscope. These band are created by the highly organized sarcomeres. A sarcomere is a bundle of protein fibers which respond to a signal and contract. In both skeletal and cardiac muscle, these sarcomeres are made of actin and myosin and are supported by the same proteins. Tropomyosin is a protein which wraps actin and stops myosin from binding to it. Troponin is a protein which holds tropomyosin in place until a signal to contract has been received. These proteins are the same in both skeletal and cardiac muscle.

As in skeletal muscle, the signal to contract is an action potential. However with skeletal muscle this signal usually comes from the somatic, or voluntary, nervous system. Cardiac muscle is controlled by the autonomous nervous system. Cells in your brain and cells embedded throughout your heart act to release well-timed nervous impulses which signal your heart cells to contract in the correct pattern. While the source of the signals is different, the reception of the signal and the rest of contraction are very similar.

The action potential, or nerve impulse, on the surface of the cell stimulates a specialized organelle to release calcium ions (Ca2+). This organelle is called the sarcoplasmic reticulum, and is derived from the endoplasmic reticulum found in a general cell. The Ca2+ ions released into the cytoplasm affect the protein troponin, causing it to release tropomyosin. Tropomyosin shifts position and myosin is allowed to attach to actin. Myosin then used the energy stored in ATP molecules to walk along the actin filaments and shorten the length of each sarcomere. When the impulse is gone, the Ca2+ is reabsorbed quickly into the sarcoplasmic reticulum. Troponin reattaches to tropomyosin, and the cardiac muscle cells release. This general process happens every time your heart beats.

As all the muscle cells work in unison, a force can be exerted in the chambers of the heart. The sheets of cardiac muscle are laid so they run perpendicularly to one another. This creates the effect that when the heart contracts, it does so in multiple directions. The ventricles and atria of the heart shrink from top to bottom and from side to side as these multiple layers muscle fibers contract. This produces a strong pumping and twisting force in the ventricles, forcing blood throughout the body.

1. Which of the following answers lists components unique to skeletal muscle and cardiac muscle?
A. Striated, Intercalated discs, branched
B. Striated, Sarcomeres
C. Actin and Myosin


Answer to Question #1
B is correct. Skeletal muscle and cardiac muscle are similar in their striations. These dark bands are produced by the highly organized sarcomeres within. All muscles, even smooth muscle, works with actin and myosin, as well as a number of other cellular processes which rely on the motor proteins. Intercalated discs and branching are unique to cardiac muscle tissue.

2. An AED (Automated External Defibrillator) is a device used to restart a stopped heart. The AED pulses a strong jolt of electricity over the heart. Why does this restart the heart?
A. Electricity is similar to an action potential
B. The jolt shocks the brain into working
C. The electricity compresses the heart and allows blood to flow


Answer to Question #2
A is correct. Nerve impulses are essentially electricity. As they travel to your cardiac muscle from the brain and from pacemaker cells within the heart, they can get disturbed. A stopped heart results from an interruption of these signals. An AED essentially primes the heart and resets the pacemaker cells, allowing a steady heartbeat to resume.

3. The cardiac muscle present on the atria of the heart is thinner than that found on the ventricles. Why would this be the case?
A. The atria do not contract
B. The atria are part of the blood vessels
C. Atria function more as pressure tanks, holding the applied pressure


Answer to Question #3
C is correct. The atria do contract and pump blood, but in a different way. Both atria take in blood and need to hold its pressure, to quickly transfer it to the next chamber or vessel. To do this, force must be given by the muscles. However, the force is less than the muscles of the ventricles produce, which is used to pressurize and push the blood.

ABOUT US
The definitive source of meaningful and informative explanations of biological concepts.
Contact us: inquiries@biologydictionary.net
FOLLOW US
© 2022 Biology Dictionary. All Rights Reserved.