Who Came Up With Binomial Nomenclature?

Binomial nomenclature is a system used to name species of animals, plants and insects using two Latin names called the genus and species. For example, in binomial nomenclature, humans are known as Homo sapiens which translates literally from Latin to “A wise man.” Some binomial nomenclature names are derived from the Classical Greek and Mongolian languages as well. In addition, the names of discoverers can be used to create the species names, such as Ablerus longfellowi, a wasp named in honor of the poet Henry Wadsworth Longfellow.

An early form of the naming system was developed by the brothers Gaspard and Johann Bauhin, Swedish botanists who lived in from the mid-1500’s to the early 1600’s. In 1596, Gaspard published his book Pinax theatric botanici (“Illustrated Exposition of Plants”) that described and classified thousands of plants. His classification system was simple but was the first of its kind, grouping plants into “herbs,” “trees” and “shrubs” and further dividing the categories based on how the plant is used. The major contribution of this work, however, was his idea to describe plants using a genus and/or species. During the same time period, his brother Johann worked on his pioneering book Historia plantarum universalis (“General History of Plants”) which was published after his death. Although unfinished, it captured all the knowledge of botany that was known at the time including Gaspard’s unique naming convention.

The credit for creating the binomial nomenclature system is often given to another Swedish botanist, Carl Linnaeus (also known as Carl von Linné) who was born over 100 years after the deaths of the Bauhin brothers. In truth, Linnaeus adopted their work and is responsible for the formal introduction of the naming system into the scientific world through his 1735 publication Systema Naturae which listed around 10,000 species consisting of 6,000 plants and 4,236 animals. Later, Linnaeus’ 1753 publication Species plantarum was the first work to consistently use a binomial nomenclature system consisting of what Linnaeus called a “trivial name” followed by a generic name. The trivial name is now called the specific epithet or specific name of the species. Linnaeus used many of the genus names created by the Bauhin brothers to make the trivial names he used in his work. 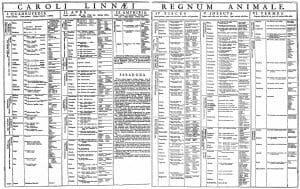