The spindle formation checkpoint occurs before anaphase can start. This cellular mechanism insures that all chromosomes are connected to microtubules and are aligned on the metaphase plate. Once this step occurs, the cell releases a signal that creates anaphase promoting complex or APC, a substance which will act to start the process of dividing homologous chromosomes or sister chromatids, depending on which cell cycle is taking place. The APC, as seen in the graphic below, will degrade securin, an inhibitory molecule that stops the action of separase. Once separase is released, it can act on the cohesins that hold chromatids together. Cohesins are macromolecules that consists of multiple proteins. When these proteins are broken down by separase, the chromatids come apart. In the first division of meiosis, homologous chromosomes are held together by cohesins that break down during anaphase I. 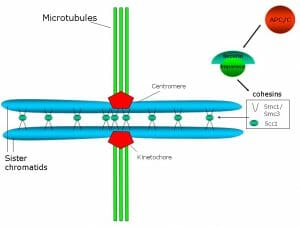 The microtubules stay attached to the kinetochore after the cohesins are broken apart. The kinetochore microtubules then shrink towards the centrosomes (not pictured), which pulls the chromosomes apart. Non-kinetochore microtubules grow in the opposite direction, expanding the cell and further separating the chromatids. Conventionally, sister chromatids are called sister chromosomes once they separate, as they contain the same information and will function independently in their new cells. After the chromosomes have been fully separated, a nuclear envelope will form and the cytoplasm will be divided in the final steps of cell division.

Mitosis is the process cells use to make exact copies of themselves. Through mitosis, two new daughter cells are created from a single parent, each identical to the parent. Before mitosis, the chromosomes containing DNA are replicated and the replicated sister chromatids remain attached. Before anaphase, the chromosomes are condensed, the spindle fibers form out of microtubules, and the chromosomes align on the metaphase plate. The sister chromatids begin to separate at the onset of anaphase, when separase begins to break the cohesin that binds them together. Anaphase ends when telophase and cytokinesis begin, as the nuclear envelope reforms and the chromosomes begin to unwind. Once they are loose and the cells have been divided, they can again start to function on their own. This marks the end of cell division and the beginning of interphase.

Meiosis consists of two consecutive cell divisions, with no DNA replicated in between. This means that a diploid organisms, containing two alleles for each gene, will be reduced to a haploid organism, with only one allele at each gene. These alleles are separated during anaphase I. Before meiosis, the DNA is duplicated, again producing sister chromatids bound together as single chromosomes. These chromosomes have homologous pairs, which contain the other alleles for the genes on the chromosome. These chromosomes are also duplicated into sister chromatids. During meiosis I, the homologous chromosomes are separated.

The homologous chromosomes become bound together during prophase I of meiosis, by similar molecules of cohesin that bind sister chromatids. As the meiotic spindle sets up during metaphase I, the cell ensures that each homologous pair becomes attached to microtubules from each side of the cell. These microtubules then pull against each other to move the homologous pairs to the metaphase plate. During the time the pairs are bonded, they can exchange genetic information in a process called recombination. When the homologous pairs are separated during anaphase I, the DNA variations become destined for different cells, ensuring variability in a population’s genetics.

Meiosis is completed with a second division of each new daughter cell. The same stages occur, this time in a fashion more similar to mitosis. The chromosomes, still made of sister chromatids, align on the metaphase plate, and must complete a checkpoint to proceed to anaphase II. At the onset of anaphase II, the sister chromatids are separated when the cohesin binding them is released. The copies of the chromosome are then separated to their final destination. These new cell will give rise to gametes which can fertilize a gamete of the opposite sex to produce a new offspring.

If the cellular checkpoints leading to anaphase I or anaphase II fail, the end result will be too many copies of a chromosome (or many) in the final gamete. This condition, known as nondisjunction, may result in fatal birth defects and other symptoms in many sexually reproducing animals. In humans these conditions include Down Syndrome, Edwards Syndrome, Klinefelter Syndrome and Turner’s syndrome. These syndromes have a variety of developmental symptoms that create phenotypes that are different from the average.

1. A cell is undergoing mitosis. The chromosomes have separated and are moving to their new nuclei, but nuclear envelopes have not reformed. What stage is the cell in?
A. Prophase
B. Anaphase
C. Telophase


Answer to Question #1
B is correct. This cell is in anaphase. Telophase is marked by the reformation of the nuclear envelopes and the further division of the organelles and cytosol. Telophase is completed when cytokinesis cleave the cell into two. The line between anaphase and telophase is gray, but the nuclear envelope begins forming at the onset of telophase. The chromosomes may still be moving to their final positions as this happens.

2. Anaphase happens incredibly quickly. The entire process accounts for only 1% of a cell cycle. Why are the chromosomes not ripped apart during this violent movement?
A. The condensed DNA is more protected from harm
B. Long segments of DNA called telomeres protect the ends of the DNA
C. Both A and B


Answer to Question #2
C is correct. DNA is protected by a number of mechanisms, only two of which are telomeres and the ability to condense. The spindle fibers also protect DNA, as they provide a clear path in one direction for the chromosome to travel on. The DNA is also quickly surrounded by a nuclear envelope after anaphase, which protects it for the rest of cell division.

3. Yeast are single-celled eukaryotic organisms. A yeast is going through mitosis, and is currently in anaphase. How many organisms are present now, and how many will there be after cytokinesis?
A. 2 ; 4
B. 1 ; 1
C. 1 ; 2


Answer to Question #3
C is correct. Yeast can sometimes reproduce sexually, but this is an example of how they reproduce asexually. Thus, after the cell divides, there are two organisms present when only one was present during anaphase. This is true of any single-celled organism that undergoes mitosis. The separation of the two cells is the dividing line between one organism and two, as the cell membrane physically separates the contents of each cell from the other. This means the organisms are theoretically independent, although they may still interact.