The hypothalamic–pituitary–adrenal (HPA) axis describes a complex feedback system of neurohormones that are sent between the hypothalamus, pituitary gland, and adrenal glands. This negative and positive feedback system regulates the physiological mechanisms of stress reactions, immunity, and fertility. 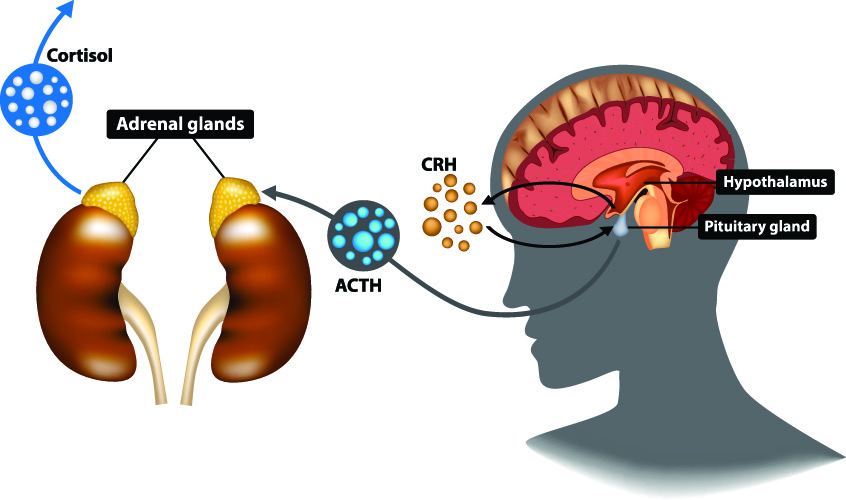 What is the HPA Axis?

If you are asked this question, the simple answer is a neurohormone feedback system between the hypothalamus and pituitary (hypophysis) glands of the central nervous system and the adrenal glands situated above the kidneys.

A longer answer to “what is the HPA axis” would describe the different mechanisms and how they work. This article will provide the details, looking at the three main structures, HPA axis hormones, and the systems they regulate.

The hypothalamus is a small portion of the brain located above the brainstem and under the thalamus. It is part of the diencephalon. It contains huge numbers of interconnected nerve fibers that connect the nervous system with the endocrine system.

The hypothalamus is split into lobes; the lobe that steers the HPA axis is the anterior lobe. This lobe is divided into different nuclei of gray matter that secrete neurohormones. The most important HPA axis nuclei are the paraventricular nucleus which secretes corticotropin-releasing hormone (CRH) and the supra-optic nucleus that secretes arginine vasopressin (AVP).

The trigger that causes the hypothalamus to increase production and release of CRH and AVP is stress. Stress is not only psychological – infection, medication, pregnancy, and our metabolism can produce an HPA axis stress response, as do thousands of other autonomic and somatic stimuli. Our sleep and wake patterns (circadian rhythms) can heighten and dampen stress responses, as do certain levels of hormones in the bloodstream.

When the CRH and AVP receptors of the pituitary have detected the presence of these two hypothalamic neurohormones, the pituitary gland is stimulated to produce adrenocorticotropic hormone (ACTH). On its own, vasopressin has a much weaker effect; in combination with CRH, ACTH production is greater. As with the hypothalamus, this gland produces many different hormones. Of these, only ACTH  is part of the HPA axis definition.

ACTH is secreted into the blood circulation.

When levels reach a certain point, adrenal gland receptors signal the two adrenal glands to produce the final chemical of the HPA axis – cortisol. Just as with ACTH, when certain levels of corticosteroids are detected in the blood, the brain will signal the hypothalamus to stop producing and secreting as much corticotropin-releasing hormone and arginine vasopressin. It also tells the pituitary gland to produce less ACTH – this is negative feedback via an inhibitory pathway. Limbic HPA axis regulation via the hippocampus, prefrontal cortex, and amygdala seems to occur by way of direct neuron connections and endocrine pathways. The limbic system regulates our emotions and memory and may play a role in HPA axis depression and other axis-related mood disorders.

Cortisol in the HPA Axis

The HPA axis hormone that causes the most physiological effects is cortisol. The presence of higher levels of cortisol in the blood makes us ready to react and stop the body from ‘wasting’ energy on things not so important to our immediate survival. When given the choice of running from a stampede of cattle and protecting us from any harmful bacteria these cattle might bring with them, the body makes the obvious choice and prepares us for flight. Adrenaline (also released from the adrenal glands) is the immediate fight/flight response. To sustain this response if the potential danger does not pass quickly, cortisol is required.

The steroid hormone cortisol has an extremely broad range of functions. Also called stress hormone, levels fluctuate throughout the day – high when we wake up and low when we are asleep. Many psychological disorders are caused by cortisol curve imbalances and, similarly, many pathologies upset cortisol production and the entire HPA axis.

When levels of cortisol are chronically high, glucocorticoid receptors become resistant to it. Cortisol receptors are found all over the body. This is why chronic stress is associated with so many different pathologies that range from cardiovascular disease to depression, infertility to muscle pain, and diabetes to integumentary (skin, hair, and nail) disorders.

The HPA axis is also modulated by another axis that initiates in the hypothalamus – the hypothalamic-pituitary-gonadal axis (HPG axis). This axis is only included as it has become clear in the last decade that gonadal hormones strongly influence how the body responds to cortisol and how much and when cortisol is produced. The fact that significantly more women than men suffer from depression and anxiety is probably due to this interaction. It is thought that estradiol elevates cortisol levels for longer periods, turning healthy acute stress responses into pathogenic chronic responses.

Postpartum depression, where the endocrine organ of the placenta causes huge alterations in maternal stress hormone levels, may also be the specific result of HPA axis dysfunction. Furthermore, women with chronic stress seem to find it harder to start a family. As nearly all psychiatric disorders involve HPA axis dysregulation of the stress response, both axes are being studied in depth. Perhaps the specific diagnosis of HPA axis depression is not so far away.

HPA axis dysfunction symptoms can occur as a result of damage or disease in the hypothalamus, pituitary gland, and adrenal glands. Other causes are low HPA axis hormone quality and a lack of or resistant receptors for these hormones. As the link between the HPA axis and limbic system, HPG axis, and other physiological pathways is not yet fully understood, treatment is not always successful.

However, the most common cause of hypocortisolism is long-term cortisone medication. This is not a form of adrenal insufficiency. Unlike primary and other secondary causes that are unable to produce cortisone in the necessary quantities, continuously high levels of synthetic cortisol cause HPA axis suppression via a negative feedback pathway. Remember that when cortisol reaches certain levels in the blood, the hypothalamus is told to stop producing CRH and AVP, and the pituitary to reduce ACTH production. In turn, the adrenal glands stop producing cortisol.

A person suffering from hypocortisolism will feel extremely fatigued and lose weight. Nausea and vomiting are also associated with Addison disease, as is skin discoloration (hyperpigmentation) due to disturbances in another closely-linked hormone – melanocyte-stimulating hormone.

Cushing’s syndrome is the result of too much ACTH produced in the pituitary gland (usually by a benign tumor) over longer periods – this increases cortisol levels. Cushing’s syndrome can also be due to adrenal gland pathology that leads to cortisol overproduction.

Ectopic secretion of cortisol describes cortisol production in foreign tissue, like the tissue of a tumor. This means that the usual HPA axis feedback mechanisms do not affect cortisol production. Hypercortisolism can also be caused by corticosteroid use – usually in the shorter term and with too high doses.

Symptoms are very broad. This shows how the HPA axis is linked to so many other endocrine pathways. Symptoms include insulin resistance and the development of diabetes mellitus, acne, and hirsutism (females) due to increased androgen (male) hormone production. A very telling group of female symptoms is the combination of moon face, facial hair, acne, buffalo hump, and apple shape. Immunity is low and wounds do not heal quickly.

Treatment for psychological-induced hypercortisolism (constant anxiety and obsessive-compulsive disorders, for example) may include lifestyle changes that integrate relaxation techniques and certain supplements. HPA axis dysregulation might not immediately benefit from supplements but these can reduce HPA axis stress signals – for example, some herbs are calming to the mind, and vitamins and minerals aid physiological function, meaning less stress is produced by autonomic and somatic pathways in the body.

According to many scientific papers, adrenal fatigue is not an accepted pathology.  As with thyroid disorders, some people believe that slightly imbalanced levels of cortisol are not detectable in a blood test. When an HPA axis test (blood test) does not show anything specific, some patients refuse to believe that ‘nothing is wrong’. For many, the diagnosis of adrenal fatigue allows them to give a cause to many different symptoms.

Slightly low levels of adrenal hormones (not only cortisol) are said to produce fatigue, aches and pains, low blood pressure, dizziness, loss of body hair, and hyperpigmentation. There is – as yet – no evidence that these symptoms are caused by the adrenal glands; however, it is obvious that some of them are associated with the HPA axis. Gaia herbs were developed to treat adrenal fatigue; however, as this disorder does not exist according to the majority of medical professionals, the decision to buy must be up to the individual.

HPA axis supplements could harm the feedback function over the long-term. Some over-the-counter remedies and recreational drugs are known to cause HPA axis dysfunction as, like all neurohormone pathways, balance is easily upset. Use of cannabis, for example, can blunt the cortisol response. While this may cause short-term relaxation, active cannabis users seem to show high levels of cortisol but reduced responsiveness to them. This is almost definitely the result of  HPA axis dysregulation. With the introduction of CBD oil, many studies are looking at the effect of marijuana chemicals on stress response feedback mechanisms.