A cilium, or cilia (plural), are small hair-like protuberances on the outside of eukaryotic cells. They are primarily responsible for locomotion, either of the cell itself or of fluids on the cell surface. They are also involved in mechanoreception. There is even a class of microorganisms named for these small structures. Ciliates are protozoans that possess cilia which they use for both locomotion and feeding.

The motor proteins (dynein) are large flexible molecules that allow the cilia to be motile. The proteins hydrolyze ATP for energy. As the proteins are activated, they undergo conformational changes which allow for complex movements. The dynein molecules essentially crawl along the microtubules, pulling the neighboring doublet up and reattaching further down. As the doublets are attached to each other through the cross-linking proteins they can only slide a short distance along each other. This movement causes bending in the cilium.

Cilia are very small structures – measuring approximately 0.25 μm in diameter and up to 20 μm in length. Where present they are found in large numbers on the cell surface. The cilia act like oars, beating back and forth to create movement.

Cilia can help to remove contaminants from organs or tissue by helping to move fluids over the cell. The lining of the nasopharynx and the trachea are covered in cilia. These ciliated epithelial cells remove mucus, bacteria, and other debris from the lungs. Another example is the lining of the fallopian tubes. The cilia here are responsible for helping in fertilization by movement of the egg towards the uterus.

Kinocilia are a specialized type of cilia found on the apical ends of vertebrate hair cells. Along with stereocilia, non-motile collections of actin filaments related to cilia, they are involved in hearing and balance (mechanoreception). 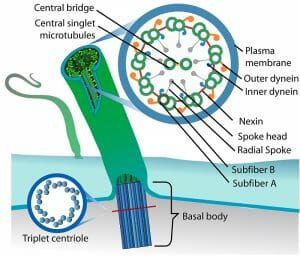 This figure depicts the internal structure of a cilium, showing the nine pairs of outer microtubules and the two central microtubules, connected by protein linkers and dynein molecules.

1. What are cilia composed of?
A. Microfilaments
B. Microtubules
C. Keratin
D. Actin


Answer to Question #1
B is correct. Cilia are composed of microtubules arranged in a 9+2 formation.

2. What type of organism does not have cilia?
A. Bacteria
B. Protists
C. Plants
D. Animals

3. Which of the following is not a function of cilia?
A. Locomotion
B. Feeding
C. Reproduction
D. Fighting infection
E. None of the above


Answer to Question #3
E is correct. Cilia function in a wide variety of roles associated with movement. While locomotion of a cell or organism (ciliate) is an obvious function, movement of fluid past a tissue or cell to remove bacteria or to aid in fertilization is also done by cilia.